The Asus RT-AX55 is currently, the most budget-friendly WiFi 6 router that Asus has to offer and it’s essentially an RT-AX56U that’s been stripped by some of its features. There is less RAM and flash memory, there are no USB ports, so you can’t connect any external storage devices, – it seems that Asus has added both features in a new firmware update.

Everything else is mostly there, so the WiFi 6 (draft) features are there to help improve the WiFi performance and the network stability – there’s OFDMA (on both bands, ul+dl), MU-MIMO (2×2), BeamForming and TWT, but the channel bandwidth goes only up to 80MHz, so no 160MHz support. I have recently tested the Asus RT-AX56U and if the RT-AX55 performs in a similar manner (as it should considering that the price tag is not as different as you may expect), it’s definitely an interesting option for those that want to check out the WiFi technology, but are more budget-constrained. 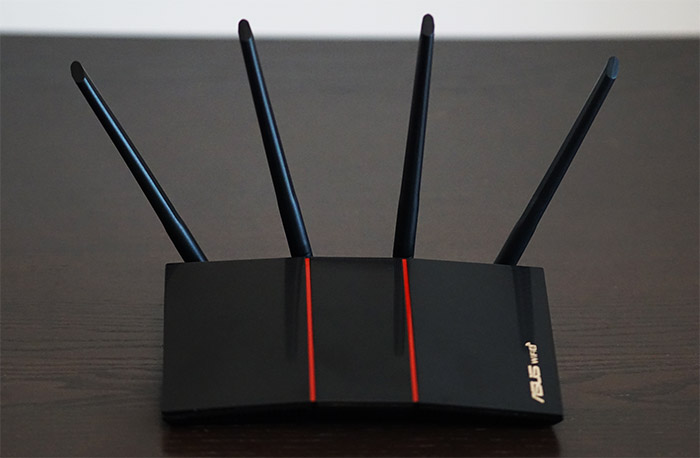 It’s true that going for a cheaper AX router may seem like a no-brainer, but it can actually backfire if you don’t have WiFi 6 clients, since you can see a worse WiFi performance with clients from the previous generation. And that’s really the talk of the hour: should you even bother with WiFi 6? Asus really wants you to give it a chance since it has almost fully renewed its 802.11ac line-up (most recently, it has also released the RT-AX68U) and yes, the WiFi 6E routers are also becoming available this year, but the price is high and the client support is pretty much non-existent – not that the WiFi 6 clients are that wide-spread either. But, if you can take advantage of some of the WiFi 6 technologies, then the RT-AX55 is an attractive solution, so let’s have a look whether it’s a solid value for the money or if you should just go with the RT-AX56U.

While in terms of design, the Asus RT-AX56U was almost identical to the RT-AX58U, the RT-AX55 has a completely different look and yes, it’s still a plastic case that sits horizontally, but the router sports a glossy textured black finish with a couple of red bands that divide the top in three parts. It’s a nice effect and I do like that it’s nowhere near as flashy as the other WiFi 6 Asus models. Furthermore, I know that the manufacturer usually uses red to show that we’re dealing with a gaming router, but that’s not really the case with the RT-AX55. The good news is that it’s just as compact as the RT-AX56U, measuring 9.1 x 5.3 x 2.2 inches (or 23.0 x 13.4 x 5.6 cm), so it shouldn’t take that much space from your desk, but if your office is crammed, you do get to mount it on the wall, right? 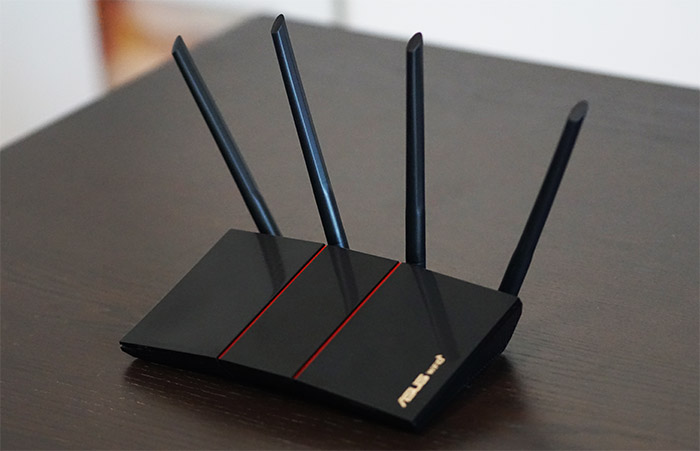 Unfortunately not, since Asus had decided for some unknown reason not to put any mounting holes on the bottom of the router. I get it with the vertically positioned routers, such as the RT-AX86U since it’s difficult to pull it off due to the way the case is designed, but the Asus RT-AX55 should have had mounting holes.

There are ventilation cut-outs found on the front side and a few more at the bottom area (next to the four silicone feet) to keep the internal temperature low and they do a good job considering that the router barely gets warm while functioning.

On the left and right side, there are no openings or ports (just a ribbed pattern) and Asus has positioned the LEDs in a way that they’re barely visible. Indeed, the five status LEDs sit on the front section immediately underneath the protruding top area and, while I do appreciate the minimalist approach, it’s a bit counterproductive since I had to take the router in my hand to check the LED lights (the icons are also barely visible). That being said, you do get a Power LED, an Internet LED (lights solid red when there is no proper connection), two LEDs for the WiFi bands and a single LED for all the LAN ports (one for each would have been better). If you switch the RT-AX55 on the other side, you can see the four antennas which, unfortunately can’t be removed (there’s no way to upgrade them) and underneath the two central antennas, rest the ports and the connectors. 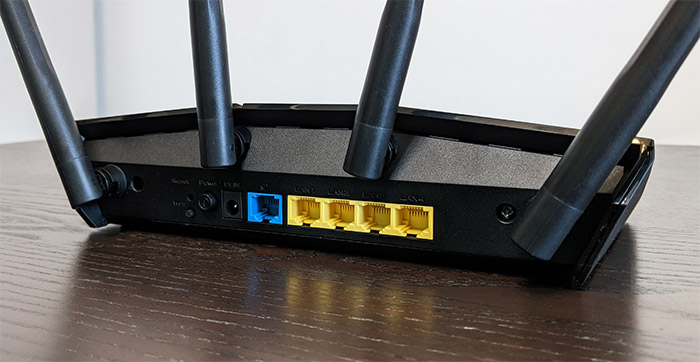 From the left, there’s a recessed Reset button (press and hold it for about 10 seconds to set the router to its default settings) which sits next to the WPS button and the Power switch. Further to the right, there’s a Power connector (still compatible with the universal adapter, just like the RT-AX86U), the Gigabit WAN port and four Gigabit LAN ports. Yes, I know that the idea behind the RT-AX55 was to make as affordable as possible, but, considering that there isn’t a huge price difference between it and the RT-AX56U (at the moment of writing), I do feel like they needlessly stripped the device from some useful features – a USB port could have found its way to the back of the router.

Before opening the case, make sure that you truly need to because you will lose the warranty (there is a seal at the top of a screw) and be aware that this has been the most frustrating router that I had to open until now. There are two screws at the rear side of the router, next to the ports and, since I encountered some resistance while trying to pry open the case, I decided to also check underneath the bottom silicone pads – and Asus has indeed sneakily added two screws under the front-most pads. This way, I could see the PCB which is different than on the RT-AX56U – two antennas are connected as usual to the board, while other two are soldered, which is very uncharacteristic of Asus. 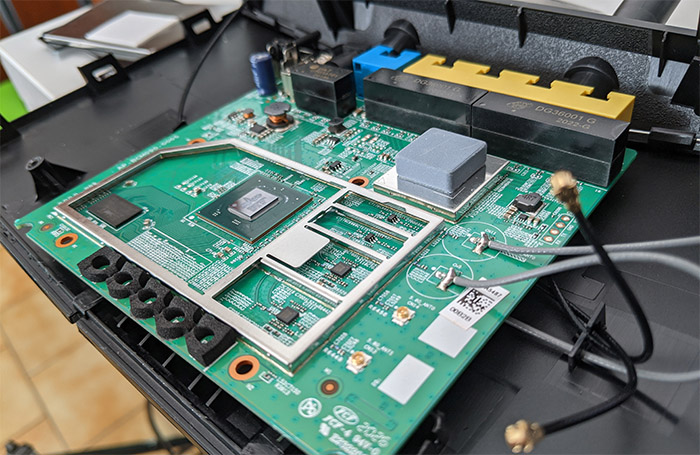 The problem is that I noticed other uncharacteristic aspects, such as the low-quality screws, the fragile hinges and overall, the entire board felt that it may fall apart while checking for its components – this is the first router that had me worried it may not turn on again after putting it back together. On the top of the PCB, I could identify an UTG18T01 2019H network transformer and a Realtek RTL8367S Ethernet switch chip (had a lot of ‘fun’ removing the thermal pad on top of it). After removing two screws that keep the PCB in place, I could turn the board the other side and I could identify 128MB of NAND flash memory from Fudan Microelect (FM25S01).

Since the Asus RT-AX55 is a WiFi 6 router, it does have most of the expected (draft-level) features and one of the most interesting new technology is the OFDMA. Using the orthogonal frequency division multiple access can result in a higher throughput considering that a WiFi channel is divided into small resource units which can then be shared by multiple client devices or, if not needed, the entire channel will be allocated to a single client. The beauty of this feature is that it can be used on both the 2.4GHz and the 5GHz bands, and you can expect downlink and uplink allocation. By default, the Asus RT-AX55 has enabled OFDMA dl on the 5GHz band, while it is disabled on the 2.4GHz band, but you can go to the Wireless section (from the web-based interface) and under Professional, you should be able to enable dl+ul OFDMA on both bands which is great for a budget-friendly router.

There is also support for MU-MIMO which can help if you have multiple compatible clients, considering that they’ll be served at the same time (no more competing for the bandwidth) and the RT-AX55 can also take advantage of the BeamForming technology which has the role of focusing the signal towards the compatible clients.
Of course, newer client devices do (sometimes) have support for all these technologies (if they’re more expensive), but the older products most likely will not be able to leverage any of these advantages, which is why the WiFi 6 routers only make sense if you have 802.11ax-ready devices in your home. Other technologies that are worth mentioning are the 1024QAM modulation (yes, that Nitro-QAM that Asus has been using for years now on its more expensive devices) and the support for AiMesh, but the channel bandwidth is limited to only 80MHz. 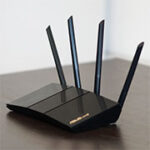