And yes, both the RT-AX55 and the RT-AX56U can become mesh nodes in a larger network – although I wouldn’t recommend going above one hop. I have had some good results using WiFi 6 routers with AiMesh, so it’s definitely a great feature to have; it’s worth mentioning that TP-Link has taken notice of the AiMesh success and it has developed its own variant called OneMesh.

To test each WiFi 6 router, I had to rely on a couple of client devices, one equipped with an Intel AX200 adapter (TP-Link TX3000E) and the other with an older 802.11ac adapter also from Intel, the 8265 – there’s also the server device which is going to be connected to the router via a CAT 6 Ethernet cable. 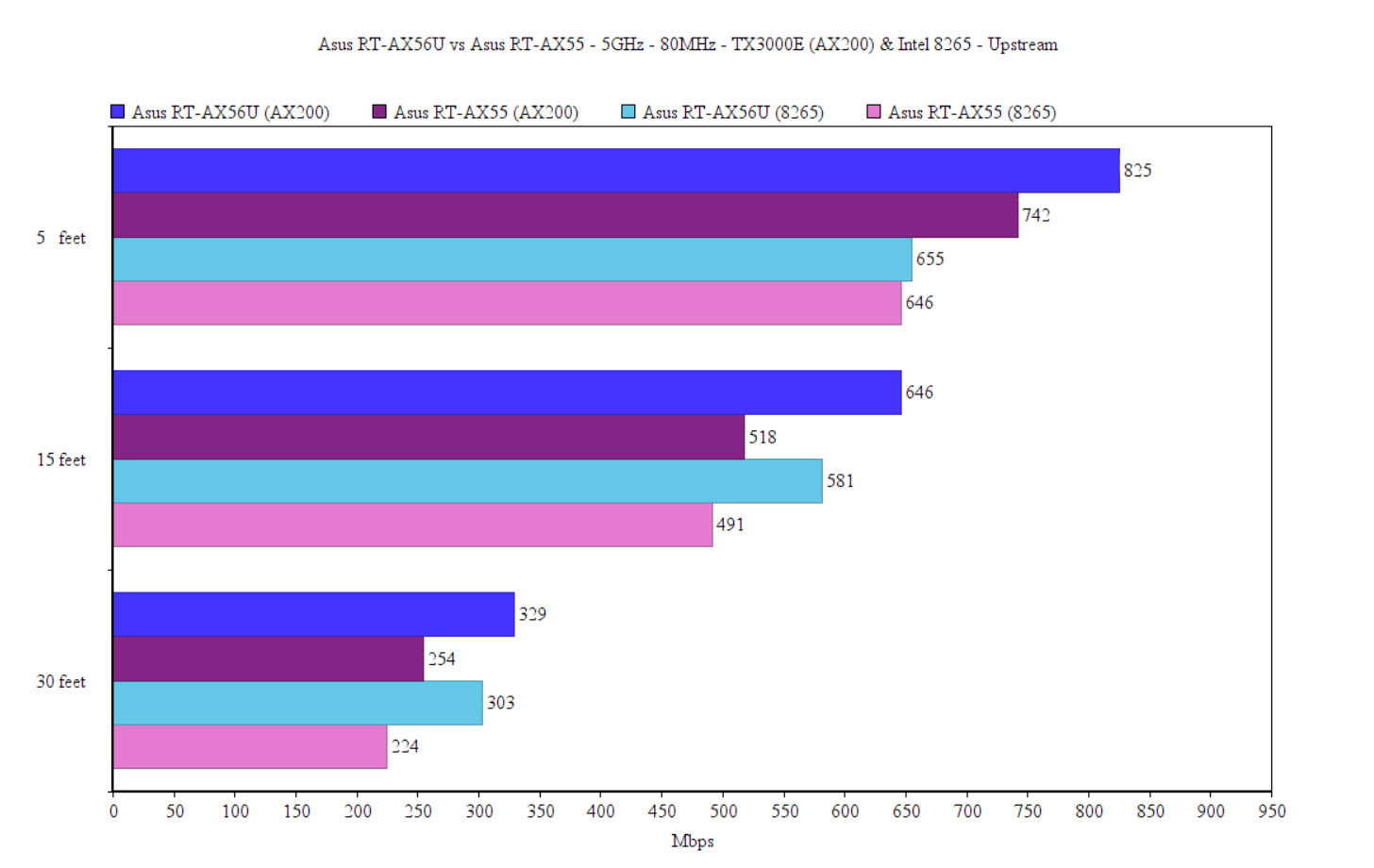 Despite sharing the same CPU, the wireless performance differs quite a bit, especially when being connected to the 5GHz network (80MHz). So, while the WiFi client was connected to the Asus RT-AX56U, I saw an average upstream throughput of 825Mbps at 5 feet and an average of 329Mbps at 30 feet. The almost-hour-long graph showed a somewhat stable run with some occasional dips, but the throughput was mostly above 800Mbps near the router. 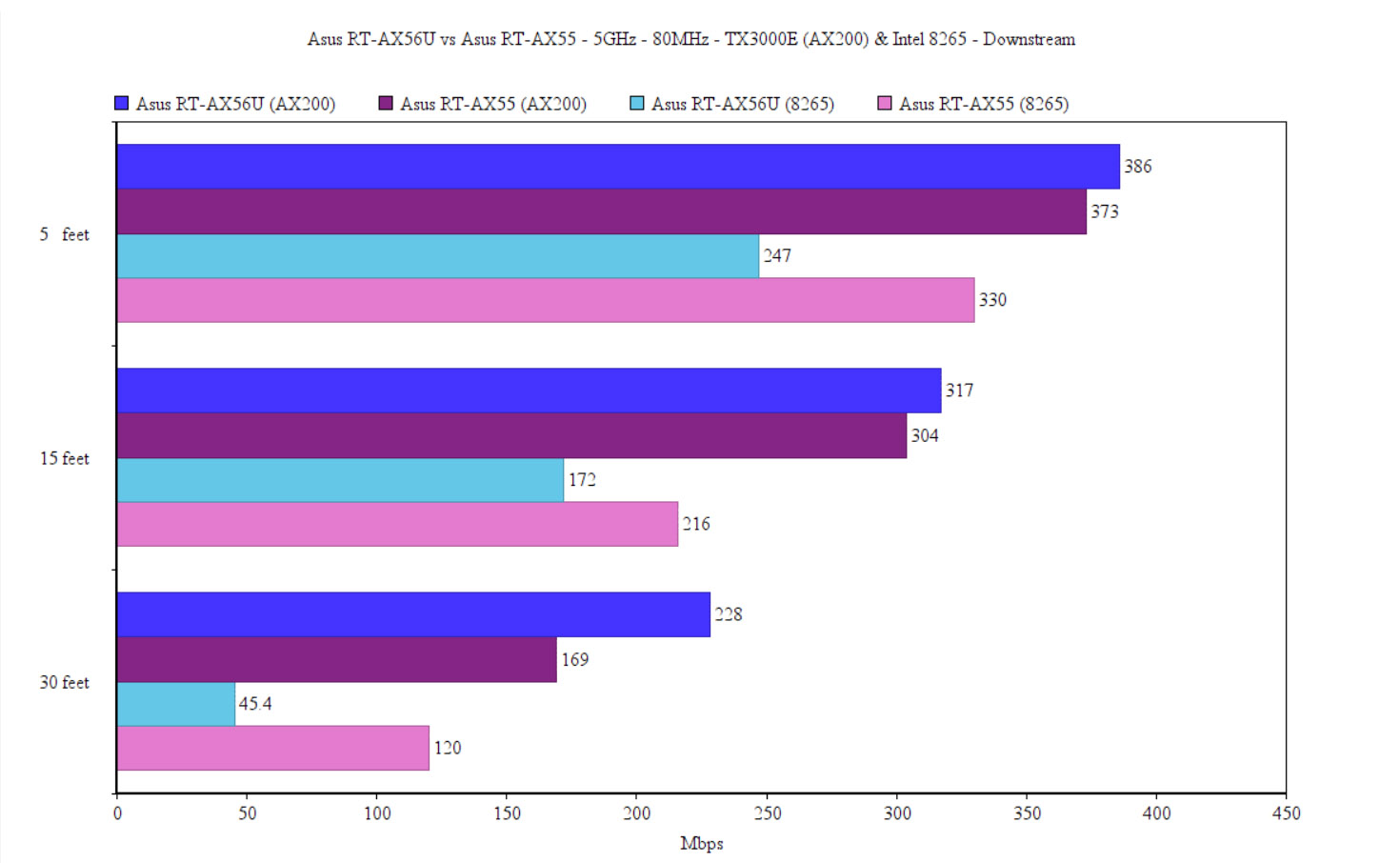 The wireless performance on the 2.4GHz network (40MHz) was very different regardless of the WiFi client that I used considering that the RT-AX56U could deliver a solid average throughput above 300Mbps at close range and a little above 100Mbps at 30 feet (upstream), while the Asus RT-AX55 struggled to go above 100Mbps with both the 8265 and the AX200 client devices – at about 30 feet, the throughput feel underneath 100Mbps. 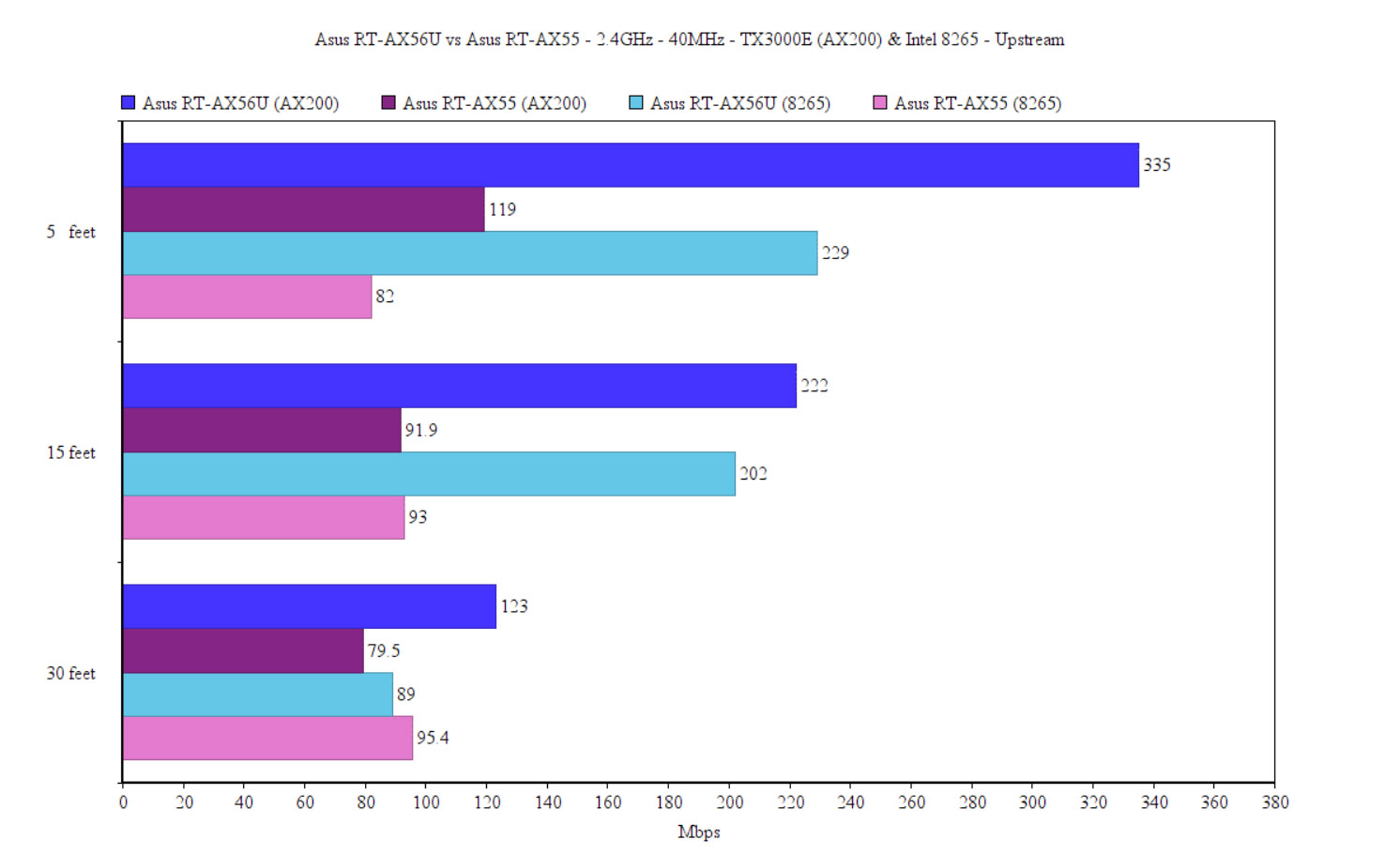 The LAN to LAN performance was good on the RT-AX55 and I saw an average of 904Mbps upstream and an average of 855Mbps downstream. The Asus RT-AX56U was a bit better in this regard, offering an average upstream throughput of 919Mbps and an average downstream speed of 889Mbps. It’s worth mentioning that the RT-AX56U does have two USB ports and I have tested them both (one is 3.0 and the other 2.0) using a Samsung T5 portable SSD. The router isn’t the fastest in its class, but a read speed of about 60MBps and a write speed of almost 40MBps should suffice for most applications. The Asus RT-AX55 lacks any USB ports, so there is no way to test its storage performance.

The App and the Web Software

You can set up any Asus router using either the web-based UI (that you can access by entering the default IP address) or using the app and, since the latter is more commonly used, the manufacturer made sure that the installation process is very quick and painless. This has been true for both the RT-AX55 and the RT-AX56U, and I have finished installing both routers in less than 5 minutes (probably the most it will take to type in the PPPoE credentials and the WiFi SSIDs and passkeys). 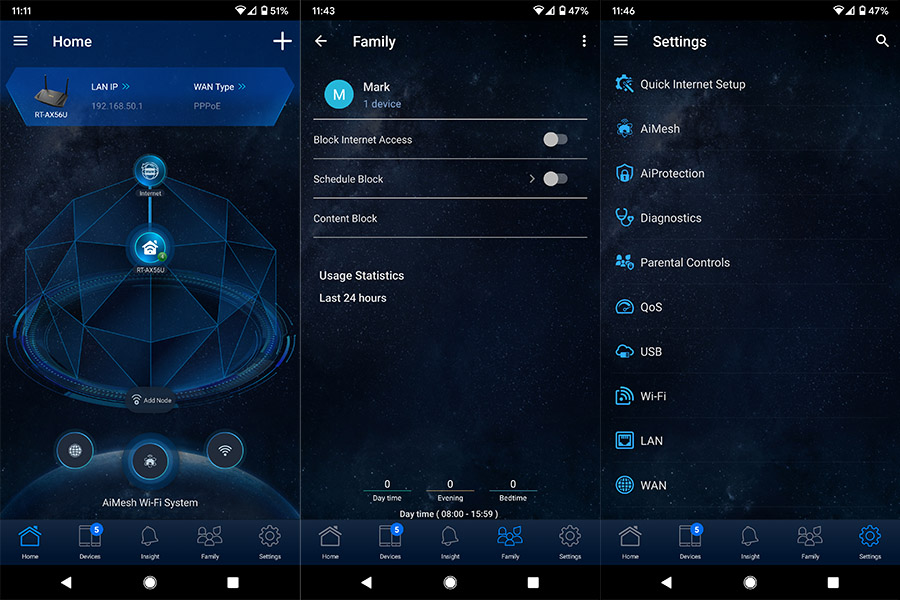 After that, you gain access to the Asus app which should look almost identical for both WiFi 6 routers, displaying the router icon in the middle of the animated circle and allowing you to swipe through various stats and info, including a dedicated area for AiMesh. Moving forward, you can enable AiProtection on either router and you can set up the Family section (Parental Controls). You should be able to create new profiles, select one or multiple devices under the said profile, select the type of content that will be blocked, create schedules for when the Internet will be accessible and view some status information. 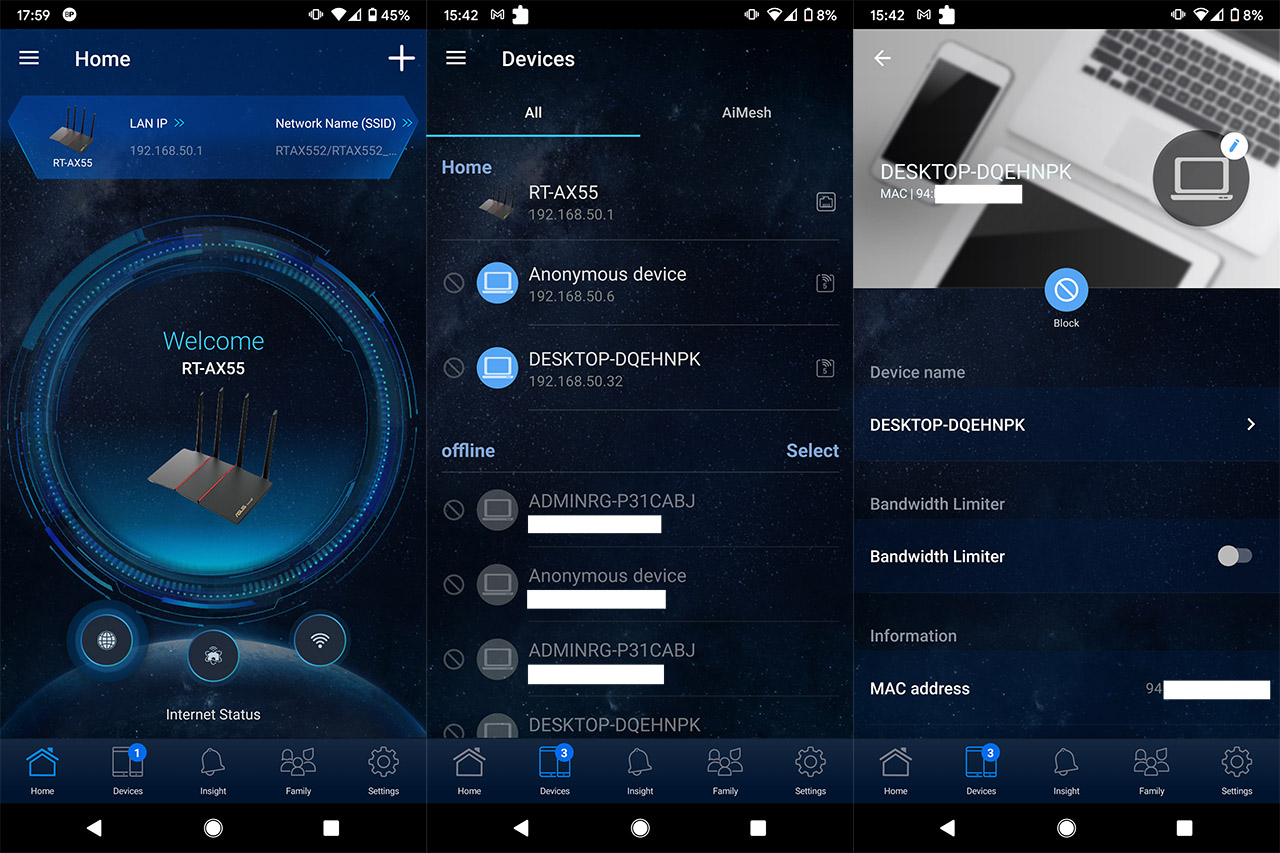 Lastly, you get access to the Settings which does not really go in-depth as the web-based GUI, but you should still get a healthy amount of options – this is available for both the RT-AX55 and the RT-AX56U. It includes LAN and WAN settings, the possibility to upgrade the firmware and one recent addition is the Instant Guard which is separate from the default Asus app and it allows the user to create a reliable IPSec connection with the router from a remote and unsafe network, ensuring your privacy and the security of your data. The Instant Guard can be used with both routers. 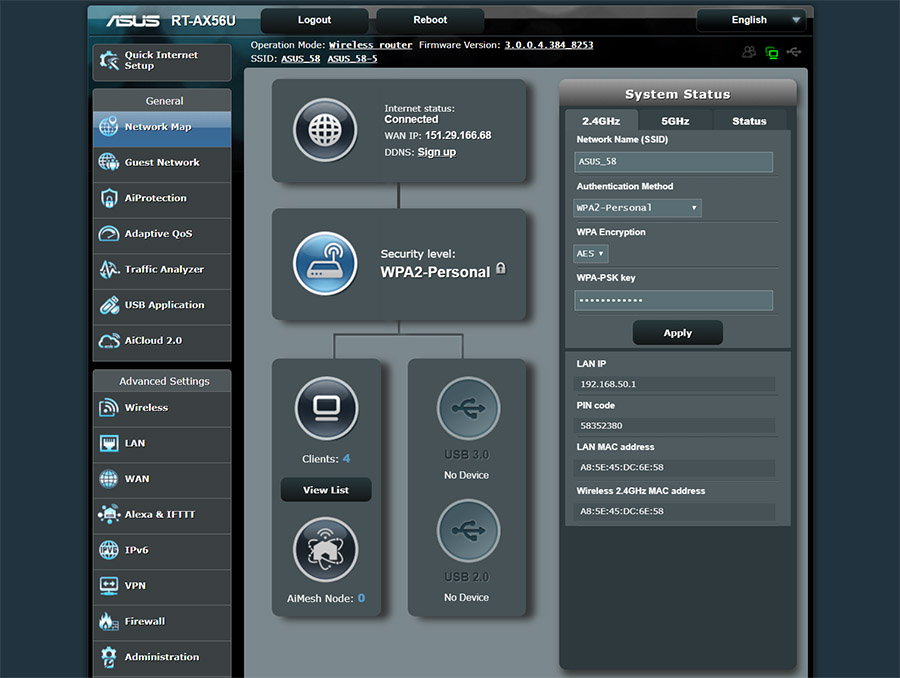 The Asus app is more limited, so, if you want to properly configure more aspects of your router, you need to access the web-based GUI. And, just like the app, it looks almost identical on both routers: there’s the menu on the left that has the settings divided into General and Advanced. The RT-AX55 was missing the dual-WAN feature, but it has been added afterwards, so the LAN settings are pretty much the same; the Wireless section does have a Professional area where you can configure a lot more parameters about your WiFi networks.
There are also IPv6 settings, Firewall rules, a VPN section (that includes PPTP, OpenVPN and IPSec VPN for both routers), as well as Alexa voice assistant. There are no gaming features on either of the two routers, but those are not really useful for the large majority of people, so no great loss.

After checking out some WiFi 6 routers from the competition, I can say that Asus has perhaps made the distinction between models a little bit more clear, at least in regards to the entry-level devices, since the mid and especially the high-end models are still very much confusing (the good news is that Asus isn’t releasing the same model multiple times, yet). After having a look at the Asus RT-AX56U and the RT-AX55, it’s clear to me that the former is the better AX1800 device in almost every way. It has a better designed case, the wireless performance is overall better, it has USB ports and it is supported by Merlin. It’s true that at the moment of writing, the Asus RT-AX56U is more expensive, but you do gain a better WiFi 6 router and, since the cost difference is not that much, it’s definitely worth the extra cash.