The PoE Speed PS-POE18P is an unmanaged Fast Ethernet switch built with a very specific role in mind and that’s to provide both power and the means to transfer data to your PoE devices.

If you’re not familiar with the term Fast Ethernet, it means that the connection is limited to 100Mbps and I know that there are already multi-Gigabit Ethernet switches available even for the SMBs due to the WiFi 6 (6E) standard, but the PS-POE18P was not really built for handling your modern networking devices (it’s going to mercilessly bottleneck your Gigabit access points), but to help connect multiple PoE cameras (where the bitrate rarely goes above 6,500Kbps) or for extending your network and adding some printers or IP phones that otherwise would not have an Ethernet port available on your router. 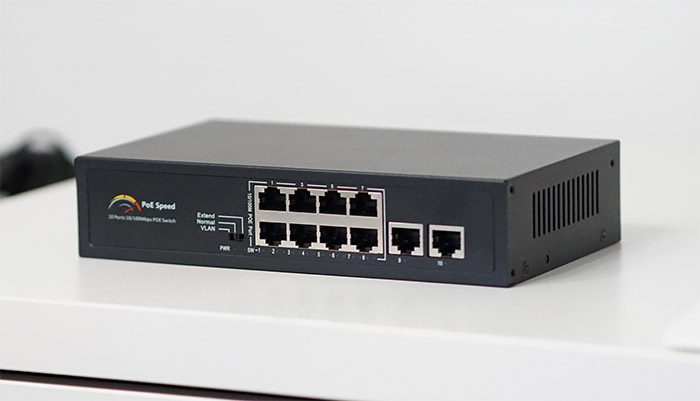 One interesting feature that caught my eye is the Extended mode which pushes the range of the connection up to 820 feet if you’re using a CAT6 cable, so it’s in the same category as the long range TRENDnet TPE-LG80 Ethernet switch, allowing you to mount outdoor-suitable cameras farther from your house. There also seems to be support for VLAN and the entire enclosure is metallic, so, without further ado, let’s check out this no-frills Ethernet switch and see whether it’s worth purchasing for your PoE devices.

The PoE Speed PS-POE18P is quite compact and went with the usual rectangular case, so it’s nothing fancy design-wise (unlike some Netgear switches that look like spaceships) and that’s a good thing considering that the device will most likely end up in a rack. Indeed, the Ethernet switch does have some mounting holes on both sides and you do get a couple of metallic mounting brackets in the package, although you may need some extensions as well. And that’s because the PoE Speed switch measures only 8 x 4.75 x 1.75 inches, but it does have some weight to it, enough to actually make it feel like it’s a more expensive device that it actually is (it weighs 1.98 lb). And that’s also enforced by the metallic body which is a nice touch for a fairly inexpensive Ethernet switch (the front panel is made of plastic). 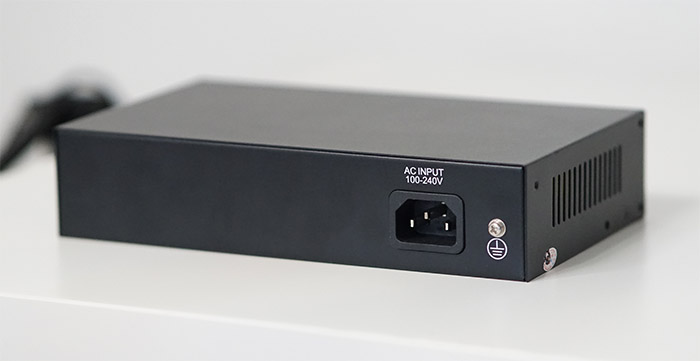 The device is covered by a black matte finish and the manufacturer has added a few ventilation holes on the left and right side to ensure that the Ethernet switch won’t overheat. And, in most cases, it barely gets warm, but, if you go to the maximum available PoE budget, the case does indeed start to warm up (but only slightly). Besides being rack-mountable, the PS-POE18P can also be mounted on the wall thanks to the two holes that can be found on the bottom of the switch and I would have liked to see some silicone feet as well since, in its current state, the PS-POE18P likes to move around on my desk. The rear side of the device is occupied by a DC-In power connector and a grounding screw, so all the ports, LEDs and buttons are positioned on the front side.

From the right, you get two Fast Ethernet non-PoE ports, followed by eight Fast Ethernet PoE ports that support the 802.3af/at standards. Underneath this block of ports, you get two LEDs for each fast Ethernet port and, while they’re a bit weirdly placed (easier to solder them on the PCB), they do get the job done: one LED will light up to show that there is a connection at either 10 or 100Mbps, while the other LED is for showing that the connected device uses the PoE technology. Further to the left, there is a Power LED and the Dial LED (will turn on when you enable the Extend mode or the VLAN) – the problem is that all these LEDs are very small and slightly dim, so it’s very hard to see them unless you look straight at them (not at an angle).

Above the PWR LED, there’s a switch that, by default is set to Normal, but you can set it to Extend, which will enable the long range PoE support for the LAN ports and you can also set it to VLAN which will isolate the 8 PoE+ ports from each other. 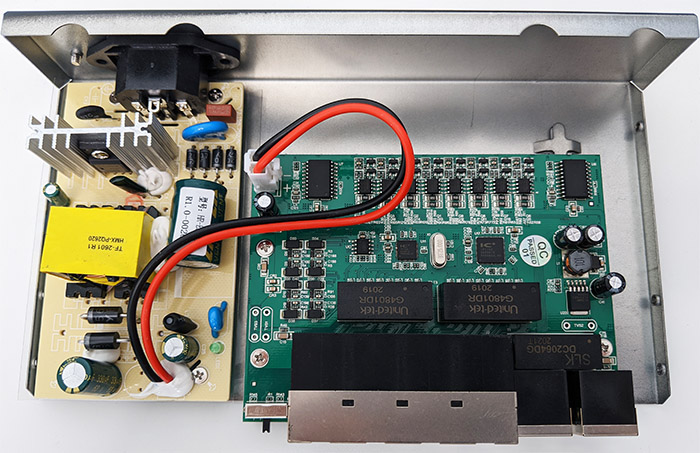 Note: The PoE Speed PS-POE18P features a packet forwarding rate of 0.1488Mbps, 1K MAC addresses, a backplane bandwidth of 2Gbps and the cache of each port is 448K.

The PoE Speed PS-POE18P can be considered an unmanaged Ethernet switch since it doesn’t require any software, so it’s essentially a plug and play device. This means that after mounting the switch inside a rack or on the wall, connect the power cord to the back of the case and, after the PWR LED turns red, you can start adding your PoE (or non-PoE) devices. Be aware that the Fast Ethernet limitation is very much noticeable especially in 2021, so, if you have a 100Mbps+ Internet connection and want to connect a PoE access point, I would advise against it. But, as I said in the introduction, even the more demanding PoE security cameras should work great with this Ethernet switch. The manufacturer says that the maximum PoE budget is 120W and, depending on the standard, it can be 15.4 W per port (802.3af) or 30W per port (802.3at).

Obviously, if you reach the max PoE budget with four client devices, then the rest of the ports will have PoE disabled. To check out how well the Ethernet switch can handle multiple connections, I decided to use one of the two non-PoE ports for the direct connection with the router and then, I took eight security cameras to make use of all the poE ports. The cameras that I used are from Reolink (RLC-511, RLC-520, RLC-520A, RLC-811A, RLC-510A and RLC-522) and Annke (NC400 and C500), each camera requiring less than 12W from the PoE budget, so all should be powered on and the data transmission should be unaffected. And indeed, everything went fine, the Ethernet switch had no problem keeping all the cameras alive and I could check the live footage from their dedicated apps. 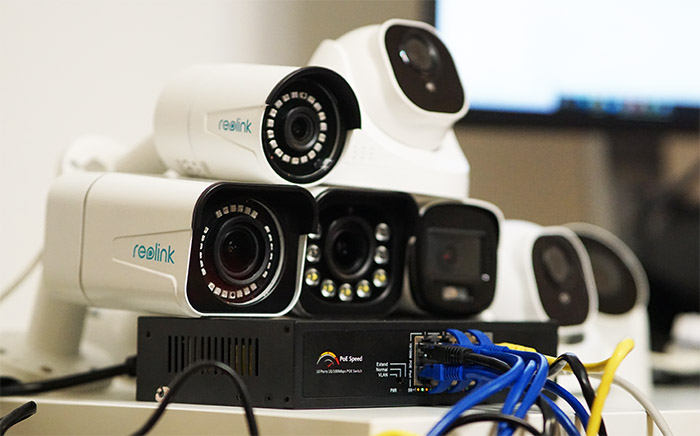 The PoE Speed PS-POE18P can also extend the range of the ports up to 820 feet (250 meters), but only if you use CAT6+ cables, otherwise, the maximum is 328 feet which is the default for CAT5 or CAT5E cables. Unfortunately, I did not have a CAT6 cable that’s as long as 820 feet, so I can’t really check the throughput, but I do expect it to have some severe limitations, such as the TRENDnet TPE-LG80 did (could go only up to 10Mbps when extended). In any case, I still connected a Ubiquiti UAP-AC-PRO and checked the LAN to LAN performance using a short CAT5E cable (I chose this wireless access point since it has two LAN ports, unlike the nanoHD): from the client to the server, I saw an average of 94.9Mbps and from the server to the client, I saw the same 94.9Mbps. Using a 328 feet CAT 5E cable did show a similar throughput, as expected.

The PoE Speed PS-POE18P is not the Ethernet switch to get if you want to extend a network that pushes data at more than 100Mbps (so not that great with Gigabit access points) due to its Fast Ethernet limitation, but it wasn’t really built for this reason. It was designed to handle multiple PoE surveillance cameras (for a home or even an office) or to connect a few printers in case your router doesn’t have enough free ports. And, as a bonus, the case is made of metal, doesn’t heat up even after I connected eight PoE cameras and you do get both the Extend and the VLAN modes. Furthermore, the price tag is fair for what the Ethernet switch offers, so, if you’re in the market for this type of device, it’s definitely worth checking out. 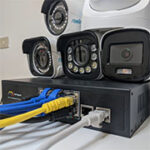