The Kensington SD5300T Thunderbolt 3 Docking Station is the latest flagship model from the California-based manufacturer and a successor to the SD5200T, a device which provided multiple Thunderbolt 3 ports, a couple of USB Type-A ports, an Ethernet connection, a DisplayPort, and audio I/O as an addition to what your laptop could offer.

The Kensington SD5300T has kept most of the ports of its predecessor (such as the Gigabit Ethernet connector and the couple of Thunderbolt 3 ports), but it also made some radical changes, replacing the single USB-C port with more USB Type-A ports, it fused the two audio I/O ports into a single one, the DP++ was replaced with a HDMI port and there is now an SD card reader, a feature that has become a necessity thanks to Apple’s ‘minimalist’ approach. 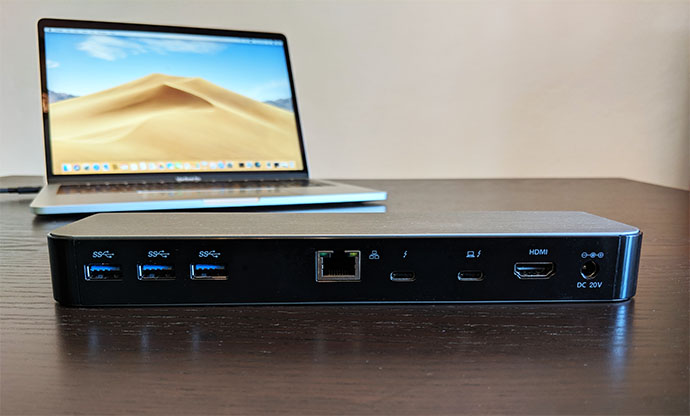 It’s true that Apple has started this trend and the other manufacturers have followed suit but some larger ports needed to be removed in order to make the computers slimmer and more lightweight, therefore more portable and to include larger batteries, ensuring more hours of use on a single charge. The alternative always remains the gaming laptop which comes with all the needed ports and with more powerful internal hardware, but which has none of the advantages of the ultrabook (it’s less portable, is usually made of plastic and the battery lasts 3-4 hours on average). The ultrabooks also give a sense of modularity allowing you to move the computer from home to the office and, using a single cable, to simply connect to all the necessary devices (mouse, keyboard, storage devices and even external GPUs) using a stationary dock which, in some cases, can also recharge the battery of your laptop, so you don’t need to carry the power brick around with you.

The Kensignton SD5300T is built specifically for this type of layout, featuring an external power brick and requiring a single Thunderbolt 3 cable to connect a higher number of devices to your computer. The docking station itself is a bit larger than its predecessor (it measures 9.0 x 3.4 x 1.0 inches LxWxH) and the case has been completely redesigned: while the SD5200T had a brushed metal frame with the top and bottom side made of plastic, the SD5300T has the top and bottom covered by two brushed metal pieces and the frame is made of plastic (with a black glossy finish). 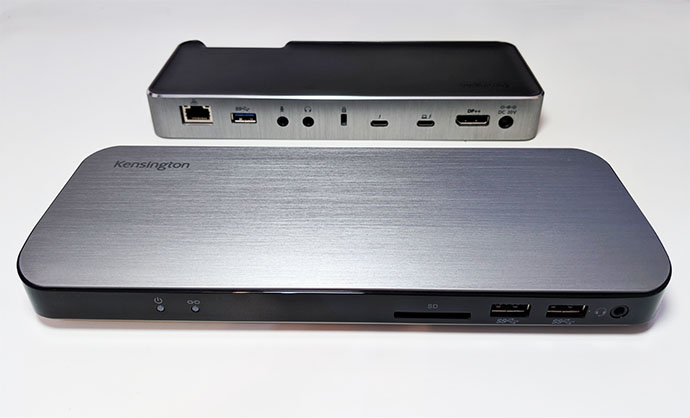 The corners of the rectangular case are rounded and both the plastic and the metal curves towards a narrower front surface – this makes the device feel more elegant and thanks to its premium build, the Kensington SD5300T will look really good next to your ultrabook or MacBook (the decision to not include any flashy elements was the most suitable one considering that the targeted audience values minimalism above the colorful over-design trend).

Since it has more metal, the SD5300T is a bit heavier than its predecessor, weighing 15.16 ounces and, thanks to its four silicone feet from the bottom, the device should stay in place regardless of the number of cables that are connected. Among the most important features of the SD5300T are the two Thunderbolt 3 ports which can be found on the rear side of the docking station, the first one supporting up to 15W, therefore being suitable for charging the battery of smartphones or some true earbuds’ case, while the second Thunderbolt 3 port is the host port (used to connect to your laptop) and it supports 60W (similarly to the SD2000P). 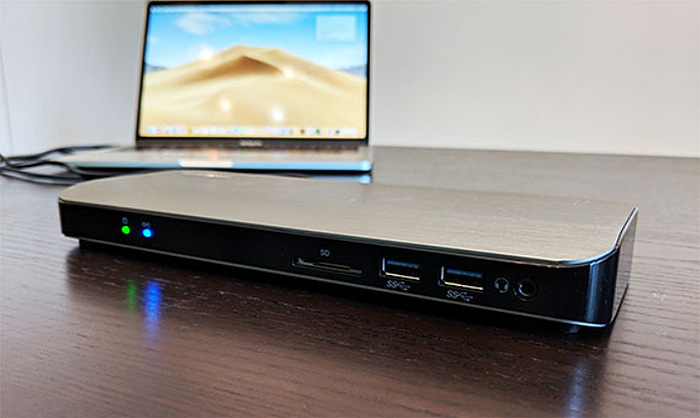 This is a step down from the 85W of the SD5200T and Kensington says that the reason for this was because most Thunderbolt 3 laptops don’t need more than 60W to be kept live and running. And that’s mostly true because my 13-inch MacBook Pro was easily handled even at full speed (charging it from 0 to 100% took just about as much as it would if I used the Apple adapter), but a 15-inch ultrabook will need 80-85W under a heavy load, so the SD5200T will cover this ground a lot more effectively – the SD5300T can also recharge the battery of a 15-inch MacBook Pro, but it will take more time and, if you run resource-heavy applications, it may lose charge.

What all the ultrabooks and MacBooks have in common is the use of USB Type-C ports (Thunderbolt 3 or USB 3.1 / 3.2) and, while I’m happy to see that this has finally united Apple with the rest of the computer manufacturers, the lack of backwards compatibility remains a major issue, especially when most peripherals are stuck on the older standard (yes, even the newer high-end ones). And that’s not all, because a source of confusion comes from the Type-C connector itself which, despite looking the same in any configuration, it can support a transfer rate of up to 10 Gbps (USB 3.1) or up to 40Gbps (the case of the Thunderbolt 3). 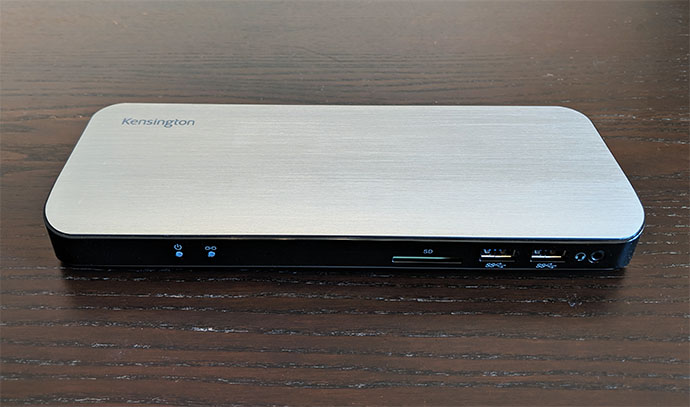 Additionally, the USB Type-C port also supports DisplayPort (1.2 and 1.4), HDMI, DVI and audio. The Kensington SD5200T has a USB Type-C (3.1) port, while the SD5300T decided to replace it with more USB Type-A ports (five instead of the three of the previous gen): the three ports from the rear side support 5V/0.9A charging and one of th USB 3.1 Gen1 ports from the front support 5V/2.1A fast charging technology (I tried recharging the battery of my Pixel 2 XL and it still charged slowly with both ports, but it did show “Charging rapidly” when using the second USB-C port, so it may be a tech incompatibility?).

Next to the two Thunderbolt 3 ports (to the left), there’s a Gigabit Ethernet port and, since most ultrabooks and all MacBooks have removed this vital port, this is the only way to gain a more stable connection from your router. To see if the docking station has any significant impact over the connection, I took an ASUS RT-AC86U router and connected my desktop computer using a CAT6 cable (it will work as the server) and next, I connected another CAT6 cable to the router and to the Kensington SD5300T dock, which, in turn was connected to a MacBook Pro using a Thunderbolt 3 cable (the laptop will work as the client). This way, I could measure the LAN to LAN performance: from the client to the server, I measured an average of 949 Mbps (the throughput was pretty much constant for the entire duration of the test) and, from the server to the client, I got an average of 863 Mbps (again, with very small variations of a few Mb). 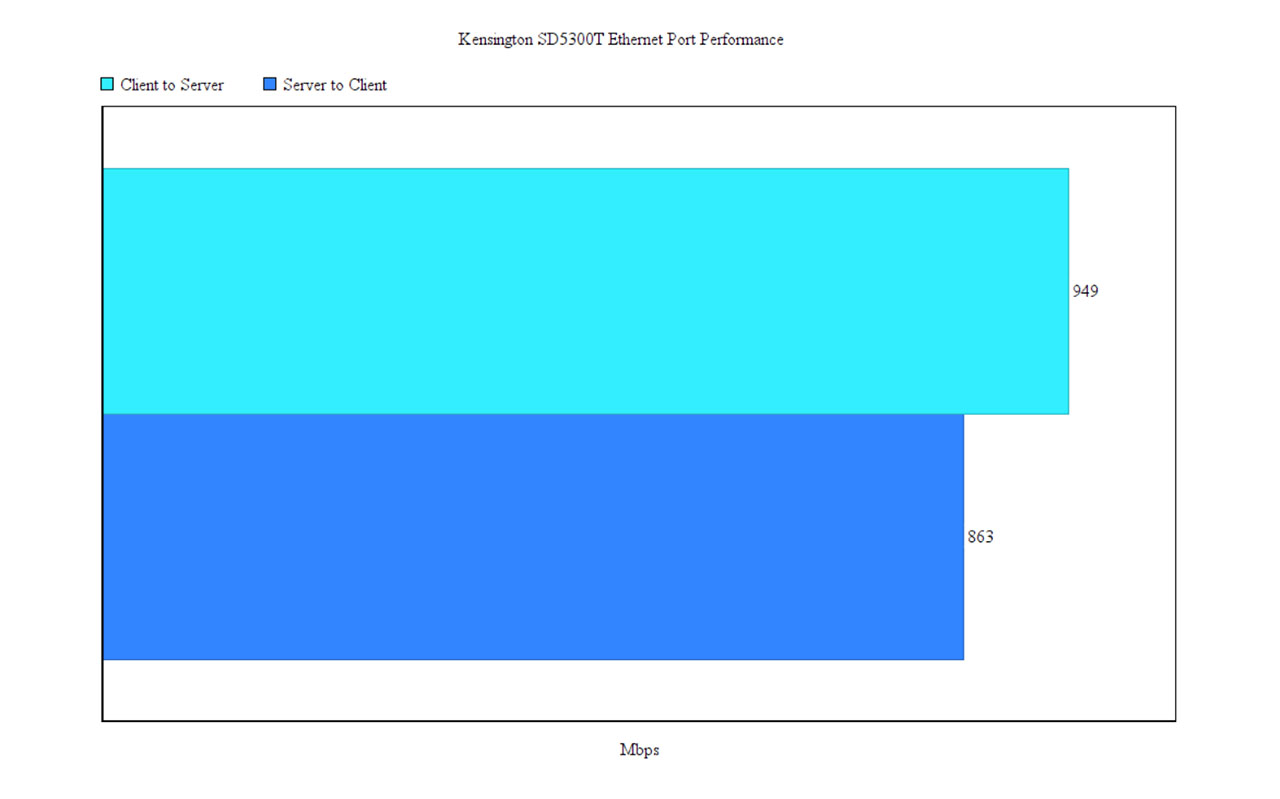 To the right side of the Thunderbolt 3 ports, there’s a single HDMI v2.0 port which allows you to connect to a 4K monitor at 60Hz and, since the manufacturer has also included a USB-C to HDMI video adapter in the package, you can add a secondary 4K monitor at 60Hz. The SD5300T can also handle a single 5K monitor at 60Hz.
Since I currently only have a 2K monitor, I connected the MacBook Pro to my Dell U2515H and everything went fine by either using the direct connection to the HDMI or through the adapter. On the front of the device, towards the left, there are two LED indicators (instead of the single LED on the SD5200T), one showing when the device is powered on (green LED) and the other if any device is connected (blue).

Still on the front side, but a bit to the right, there’s an SD 3.0 UHS-I card reader which supports speeds up to 104 MBps. I didn’t have the fastest micro-SD card around, just an 8GB Hama microSD HC class 10 which, when connected directly to my Lenovo laptop, it delivered an average reading speed of 58 MBps and an average writing speed of 19 MBps. When connected through the docking station, I got the same performance in both the reading and writing speed test. Considering that the MacBook Pro lacks a card reader (other ultrabooks, such as the Dell XPS and the HP Spectre do have it), this addition is going to be extremely useful especially if you’re a photographer or if you’re shooting videos on a daily basis. Further to the right, the SD5300T has a single audio port where you can connect headphones with integrated microphone (unlike the SD5200T, which had the headphone and the microphone port separated). On the left side of the dock, the manufacturer has added a Kensington Security Slot and a smaller Nano Security Slot. 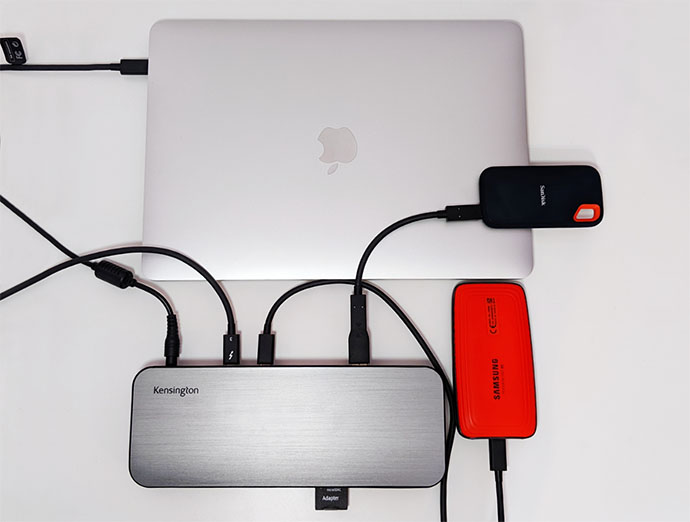 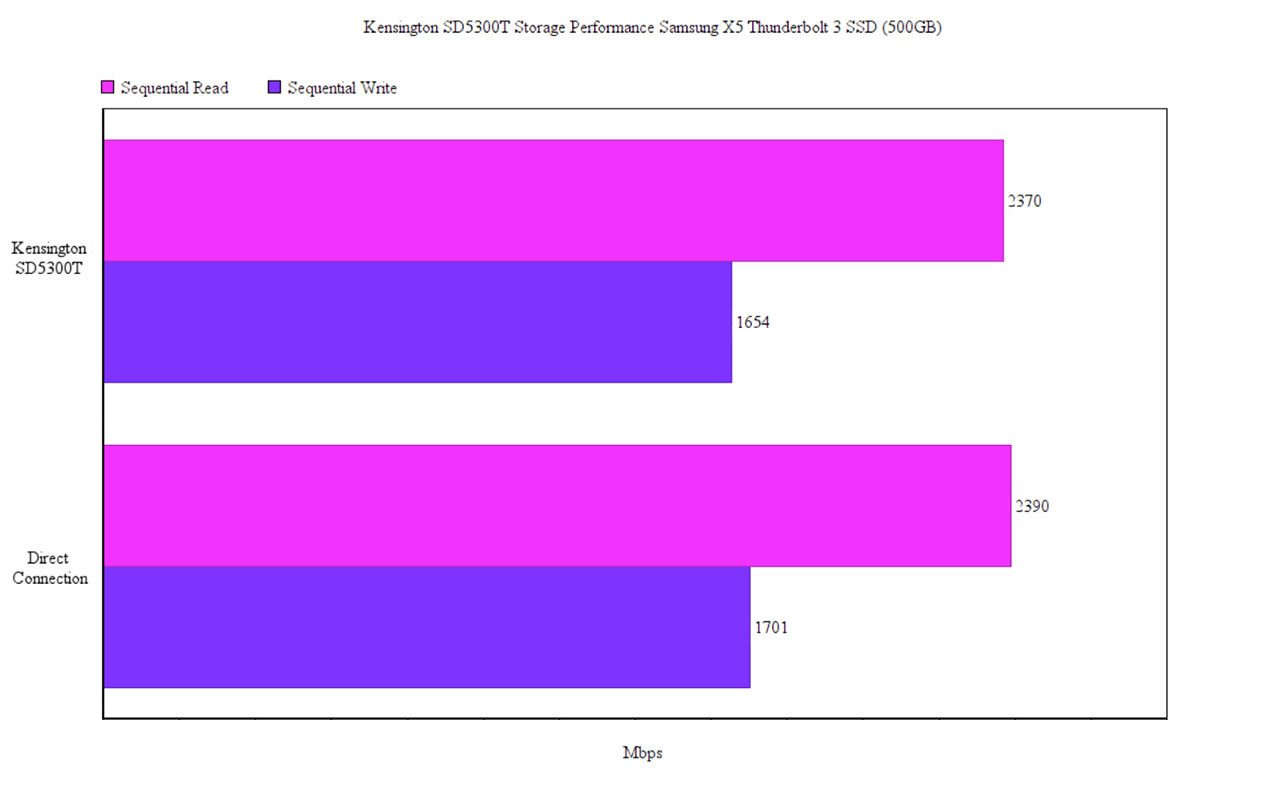 Since not all your devices will use the Thunderbolt 3 standard, I decided to format a SanDisk Extreme external SSD (250GB) and run the BlackMagic benchmark. This way, when connected directly to the MacBook Pro, I measured an average of 513 MBps on the reading test and an average of 485 MBps on the writing speed; after I put the Kensington SD5300T in the middle, I measured an average reading speed of 503 MBps and an average writing speed of 467 MBps. Once again, there is a very small difference between the direct connection and when using the docking station. 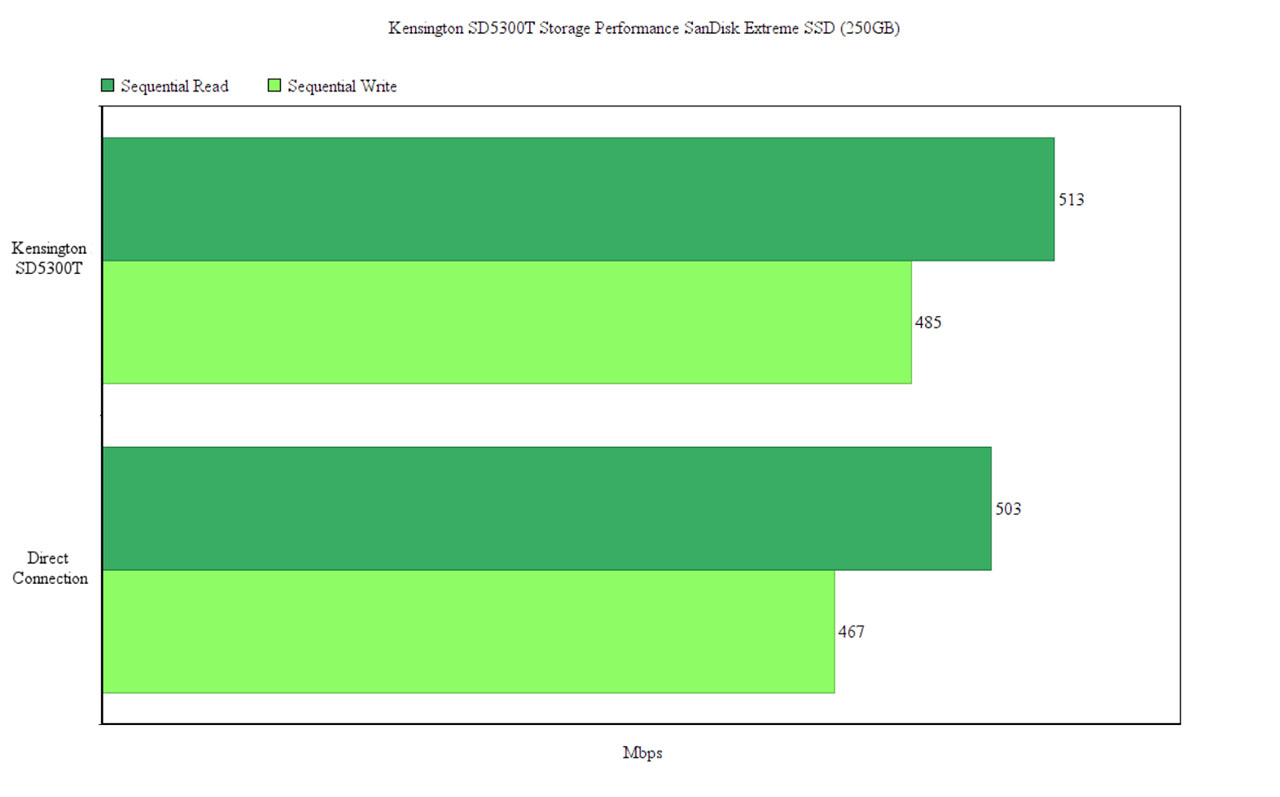 While running the tests, the docking station got a bit warm all around the case, but it didn’t show any signs of overheating (unlike the Samsung X5 which wanted to catch fire). Similarly to the SD5200T, the docking station can be used with the DockWorks software to actively monitor the connection, to enable the MAC Address Pass-through feature and to easily switch from the WiFi to the LAN.
Note: If you want to connect the SD5300T to a USB 3.1 Type-C (non Thunderbolt 3) port, it will not work because the docking station does not use the Titan Ridge controller.

Conclusion
The Kensington SD5300T doesn’t seem to aim to be a replacement for the SD5200T but to coexist alongside it, offering some features that its predecessor did not have (such as the SD card reader, more USB ports and a modified audio port), but it also has downgraded some parts, such as the power delivery (which went from 85W to 60W) and removed the USB 3.1 Type-C port. That being said, similarly to its predecessor, the SD5300T features a premium build quality, it supports 5K / dual 4K monitors, has enough ports to connect all your peripherals (including fast eGPUs) and gain a wired Internet connection, all that while requiring nothing more than a single Thunderbolt 3 connection to your computer. 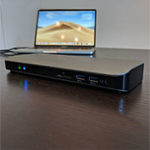