I don’t know if I should call the GameSir G7 the seventh generation of gaming controllers since there is a good number of various gamepads developed by GameSir on the market, but I can definitely attest that the G7 feels the most refined.

The RT/RB and the LT/LB keys feel so much smoother, the joysticks are fairly accurate, and the manufacturer has also added the M1&M2 back buttons which are easy to access and are just as smooth as the shoulder keys. But GameSir felt that fine tuning the buttons wasn’t really enough to capture the attention of gamers, so it decided to get creative and added the possibility to change the face plates.

While the GameSir G4 Pro and T4 Pro were trying to accommodate the multi-platform gamers, the GameSir G7 is clearly designed for the XBOX console or PC, so, besides the LEDs (no RGB, which are ‘mandatory’ for any gaming device), you do have the possibility to customize the controller a lot more than your usual gamepad. The idea is not just to switch between the black and white face plates, no, GameSir encourages you to color the plates since these are made to be paint-friendly, so go ahead and color them however you want.

One potential drawback is that the GameSir G7 does not have an inner battery, so you do need to connect it to the console or PC by cable. Other than that, the gaming controller looks promising, so let’s put it to the test.

The GameSir G7 has a similar layout to the other gaming controllers from the series and I was surprised to see that it is almost identical to a gamepad from the T series, the T4 Pro. And, considering that The GameSir G7 measures 5.98 x 4.06 x 2.48 inches (15.2 x 10.3 x 6.3cm), they’re pretty much the same size as well. Which is fine since both gaming controllers fit very nicely inside the palm of my hands. All the buttons and keys are within easy reach (and I do have very long fingers) and one design choice that caught my eye was the XBOX logo that replaces the usual GameSir icon.

The developers were very generous with the grippy texture and not only on the handles, but on the bumpers and triggers as well. The M keys were left glossy which is not really an inconvenience considering that the middle fingers rest naturally on them. And I like that GameSir learned from the T4 Pro, so it raised the M keys and made them a bit larger. The GameSir G7 does have a USB-C port positioned at the front where you need to insert the USB-C to USB-A cable for powering up the gamepad.

But there is one thing that I didn’t like, and I have seen it on some smartphones as well (such as the AGM Glory Pro and the H5 Pro). GameSir put the USB-C port deeper withing the plastic case, while keeping the canal as narrow as possible.

This way, you can only use the GameSir cable or any other narrow USB-C cable, of which there aren’t many available on the market. I know that the manufacturers dislike universal ports and connectors, but this isn’t a very consumer-friendly solution. One redeeming feature is that the cable is very long (almost 10 feet long), so you can get far enough from the TV. On the other side of the gamepad, there is a 3.5mm jack for connecting headphones and a Mute button (check the red LED to know that the voice has been muted), which are expected on a controller that competes with the original XBOX gamepad.

The GameSir G7 Keys and Buttons

The buttons layout is mostly the same as on the original XBOX controller which means that there’s a D-Pad on the left along with a joystick, while on the right, there’s the ABXY block on button and the second joystick.

I was impressed by how the joysticks on the G4 Pro felt and moved, but the added texture at the top really made the joysticks on the GameSir G7 even better. They’re grippy and very satisfying to move around – the surface where your finger rests is also a bit bigger which does make a difference. The D-PAD is not as good though, but is not bad either, the buttons being responsive and easy to press. The ABXY buttons are actually a bit better than on the original gamepad, having a more satisfying movement and clicky sound.

It’s worth mentioning that the D-Pad also has a few new functions such as the ability to increase or decrease the volume (hold M and press Up or Down) and you can also switch between Voice Chat and game Volume by holding the M button and pressing either left or right on the D-Pad. The bumpers have also been improved especially over the ones on the G4 Pro, having a less hollow sound and feel which were traded for a more reactive set of bumpers – you can press them from whichever part, the bumpers will always activate and feel even.

The spring on the triggers is very similar to the G4 Pro which was already fine enough and, as I already mentioned, the programmable M buttons are better designed than on the T4 Pro. There are four other buttons that I need to mention, the first hiding behind the XBOX logo and, when pressed, it will open up some stats, the XBOX Social, the Capture window, as well as the Audio section. Next, there’s the Menu button, the View and the Share buttons.

The face plates are the main highlighted feature of the GameSir G7 and it makes sense since it brings the idea of customization beyond just switching between various button types (as we saw on the GameSir X3). You can now switch between various face plates, either colored by you or getting them painted directly from GameSir.

The plastic is finished in such a manner as to ensure that if you use a marker or paint, it won’t come off. Furthermore, detaching a face plate and putting another in its place is simple since the system relies on magnets.

Besides the face plates, another fairly unique feature is the ability to configure the behavior of almost every key from the controller and that can be achieved by using the GameSir Nexus app available on the Microsoft store. The interface is simple, and the options are straight-forward. You get the possibility to update the firmware, check if the Vibrations work and then, you can set up a maximum of three Profiles. The configuration on each profile includes mapping most of the buttons and adjusting the radius of the Stick’s radial areas.

You can also configure the Trigger buttons and I noticed that each has the option to be converted into digital quick pull button (from analog input). This should be an interesting option for FPS games. Lastly, there’s the Vibration section where you can set how strong the vibrations will be on each side of the controller.

Since I have praised the feel of the keys so much, my expectations were very high when I decided to use the controller with some of the games that I currently play. And yes, I have tested the previous gamepads using Stadia, but since Google decided to kill its project, I had to get a new GPU considering that the 11-year-old GTX 560ti just couldn’t handle any modern title anymore. A 6800xt later, I tried out some of the games that I wanted to check over the years.

The first one is the AC Origins which is, well, a game (I have no idea what Ubisoft is doing with this franchise) and the performance was the same as with the ‘official’ XBOX controller. I experienced no finger fatigue, and the keys were easy to press and always the right place. I wanted to also check out the Read Dead Redemption, but the experience is very similar, so I just moved to a racing (?) game called NFS The Crew 2. I was surprised to see that the developers have made a racing game so compatible with a controller and the GameSir G7 does not let down either. As for latency, the gamepad is connected via cable, so there is none.

The GameSir G7 is all about customization and it’s not only about the faceplates which open up a whole new realm of possibilities, I am also talking about the way the shoulder buttons behave in games and there is also the possibility to customize almost all the buttons from the gamepad. I do think that the switches that GameSir used with the G7 are better than with the other controllers and the default fine-tuning is already well-done. I suppose the only shortcoming is the lack of inner battery and perhaps the limitation to only a couple of platforms (both under Microsoft). So, I do look forward to a wireless gaming controller that keeps everything that makes the G7 an excellent gamepad. 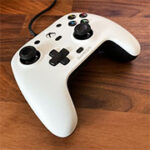