On the right side of the window, I could see the pair of new icons that I saw with the RLC-511WA – one for enabling the torch and the other for sounding the horn. Underneath the live footage, there’s some quick action icons that allow you to Start/Pause the live video, record audio, capture a photo, record a video, set the image quality and enlarge the footage to full-screen. The image quality can be set to Fluent which will require the least resources (less bitrate and pretty much no lag), you can also set it to Balanced which does have a slightly higher bitrate, but will still be less taxing on your connection and lastly, you can set it to 3840x2160p, the highest available image quality.

The Reolink RLC-811A relies on an 8-megapixel 1/2.8″ CMOS Sensor with the max resolution of 3840 x 2160 pixels to deliver a crisp and detailed video and I know that a high resolution doesn’t always mean a better footage, but Reolink does rely on the SuperHD tech to maintain the quality as high as possible. Interestingly enough, I did notice a few times that the application would suggest that I should drop the quality to Balanced due to a poor connection which is pretty much impossible with my current router (RT-AX82U), so it’s clear that it reached the bitrate cap a few times.

I have to mention that I do not have a 4K monitor or TV, so the footage will have to be limited to 2K – it still needs to be better than what the RLC-511 offered. And indeed it is since during the day, the video was, as expected great, with the colors a bit on the contrasty side, but overall, it does look very sharp and the objects are well defined even in the distance. I usually point at objects no farther than 200 feet and as you can see, the footage looks great but, after zooming in 5x, the image is even better. The buildings are about 700 feet away and the RLC-811A has kept all the details at minimum noise.

I did notice a slightly annoying quirk: not sure whether it’s the app or the motor, but sometimes, when I check the live footage, it’s completely blurry (out of focus) and I need to zoom in and out to fix it (hopefully a firmware update will put an end to it). During the night, the 8-megapixel sensor did a good job even in black and white, keeping all the details even if the object of interest is far away. Of course, the clarity does suffer a bit, but it’s still better than the 5MP used by other RLC cameras. After zooming in 5x, the footage has kept its details and clarity, and most importantly, there was only a slight amount of lag (about 1 second, 1 second and a half). So you can point the camera towards a busy street without worrying that you may not zoom in time towards the object of interest.

The spotlight allows the RLC-811A to deliver a colored night footage and the extra pixels do make a difference. The image gains a bit more clarity than the simple black and white footage, so you can better see what’s going on in front of the camera and, after zooming to the maximum, the footage is again, clear enough to distinguish people moving in the distance, as well as any cars that may pass or slow down to check your property. The viewing angle is between 105° and 31° horizontally and between 55° and 17° vertically.

Just like the RLC-510A and the RLC-520A, the Reolink RLC-811A relies on the smart motion detection technology to be able to tell the difference between moving cars and humans and I noticed that the Playback section from the app allows you to filter the videos recorded by the camera depending on the type of trigger (general Motion, Person or Vehicle). Since I live in a very quiet neighborhood where cars rarely pass by (much less people since we need to stay indoors), I had to rely on the same video that I used to test the other smart motion detection cameras from Reolink: YouTube video – DNA of New York · Aviation · White Noise · Unwind. This video will cycle through various streets where you will mostly see people walking or standing and then will move to busy intersections filled with cars.

I saw that the AI could accurately tell when a human was moving (even if the person was on a bike) and when a vehicle was in front of the camera. Furthermore, if both a walking person and a car were in the view, the camera would immediately start recording and put the video in the Human category (the vehicle gets a lower priority). The best results I got when the camera would point at no more than 100 feet, especially during the night since from that point, things got a bit blurry. At the same time, it may be the limitation of my test since the 8MP sensor is capable of going further in real life and retain most of the details of the objects. 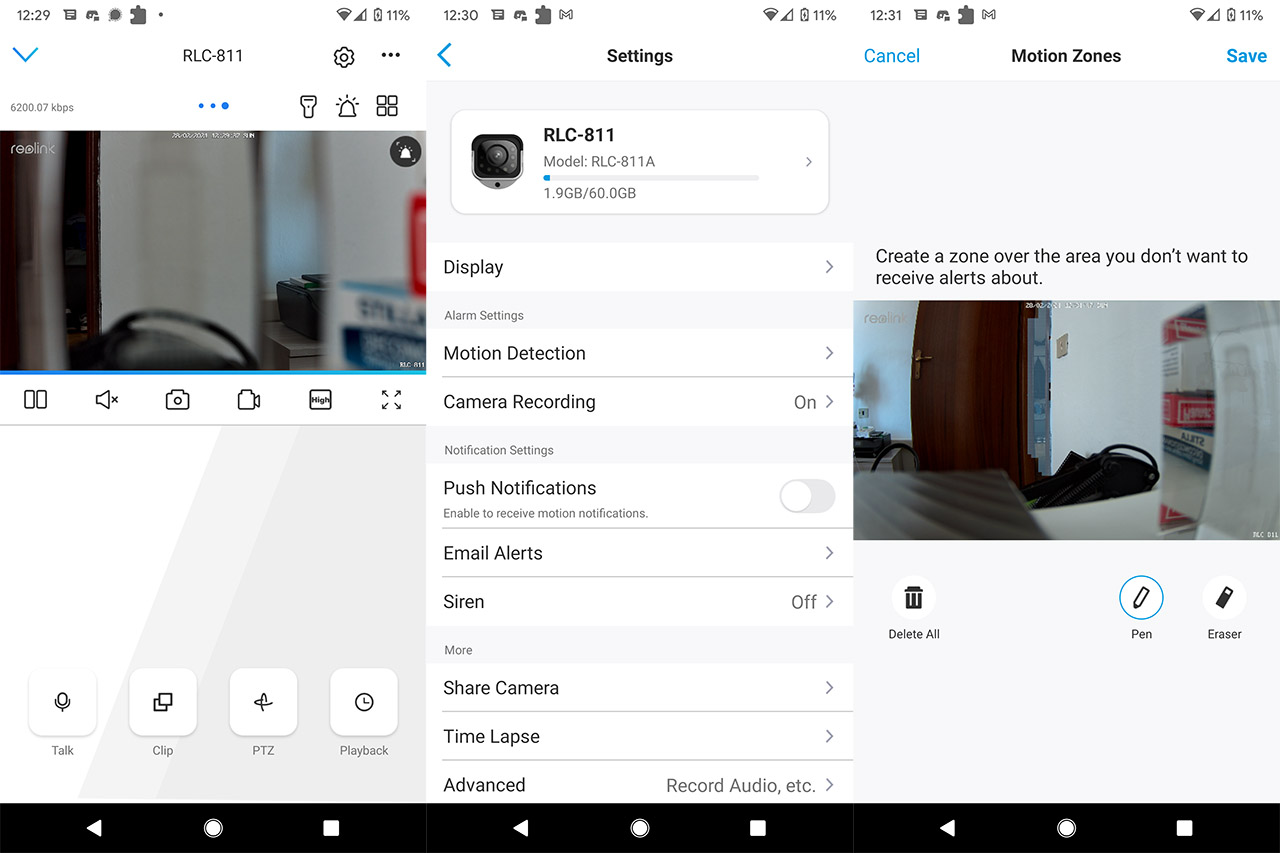 Furthermore, if I zoomed in 5x and left the camera for a few hours (pointing outdoors), I could see that occasionally, I did get a notification that the camera saw a passing car almost 700 feet away, but for a person to be detected, it needs to be a bit closer to the camera. This means that if you have a warehouse that needs to be monitored, then the RLC-811A will go further than most (if not all) of its competitors and it will also be able to detect when a person or car gets close to your fence (even if it’s very far away – and you don’t get this option with other cameras in this price range).

The application will allow you to set a Motion Area where you can draw on a specific portion of the footage where the sensor will ignore movement which is great if the camera gets triggered by moving cloth or tree branches. The Notifications were also very fast, as expected from a PoE camera (with WiFi, things can get tricky) so, after the sensor detected movement, my smartphone and smartwatch would get the notification after no longer than 3 seconds. As for storing the videos, you get several options. First, there’s the microSD card slot which, just like the RLC-520A, it supports cards up to 256GB (unlike the 64GB from the previous generation), but you also get the option to rely on the proprietary Reolink NVRs or even third-party ones (those that support ONVIF and RTSP protocols).

Reolink has really done a great job with the new smart motion detection RLC series (that have the A at the end of their names) and the RLC-811A is currently the best that the manufacturer can offer from the price to performance ratio. You do get the 4K resolution (which means a huge amount of details during the day and during the night – colored or black and white), there’s the spotlight and the speaker, the 5x zoom which works wonderfully, as well as the aforementioned smart motion detection. Furthermore, let’s not forget that the competitors that offer a 4K resolution are in a completely different price bracket, so the Reolink RLC-811A is currently in a leagues of its own. 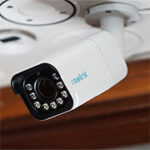