Both the SwitchBot Meter and Meter Plus were designed to not only show the temperature and humidity levels in the surrounding area at a glance, but to also potentially work as a thermostat. How so you may ask? Well, if you do use the SwitchBot Hub Mini (which I briefly checked when I tested the smart curtains), then you can pair it to your air conditioners and, if the temperature rises above a certain level, then the air conditioner will automatically cool down the room.

And since I got both the SwitchBot Meter and Meter Plus, I noticed that the main difference between the two devices is the size of the screen. It’s not like the SwitchBot Meter had any issue to show the temperature and humidity, it’s just that the Plus version is better at displaying these values without really taking that much space.

And truth be told, I have been checking these small temp monitors a lot more ever since the heatwave started sooner than expected (95 F in May is no joke). Since there is a full integration with the SwitchBot app, you can view a graph of the temperature and humidity over certain periods of time, but that’s pretty much it.

It’s a simple device that serves a simple purpose, so it’s more like a sensor that you can use within the ecosystem to make other stuff work better. Certainly, even as a standalone device, the SwitchBot Meter works great, so let’s check it out a bit more in depth (and also see a comparison between the base and the Plus model).

The SwitchBot Meter is a small rectangular device that measures 2.17 x 2.17 x 0.94 inches (or 5.5 x 5.5 x 2.4 cm) and yes, it’s mainly made of plastic covered by a white matte finish. The exception is the display which is a black and white panel with no backlight (e-ink), so it’s not possible to see the values during the night.

Even during the day, the numbers are a bit narrow, something that was fixed on the SwitchBot Meter Plus. And it’s not only the bigger case (3.1 x 2.5 x 0.9 inches) and larger display (3-inch display vs about 2 inches of the base Meter), since the numbers are both larger and bold. What’s interesting is that these two devices don’t differ that much in terms of weight and the smaller model is actually heavier by 0.04 ounces (the Meter Plus weighs 2.3oz).

The good news is that the more compact model feels robust and it won’t easily fall on its back. Then again, the SwitchBot Meter Plus is built a bit differently, sporting a slightly larger base, but, since the manufacturer anticipated the possibility that the device may easily flip over, it has added a detachable support on its rear side.

It’s where you can also find the battery slot and, in the case of the Meter Plus, all you have to do is to remove the plastic piece that separates the batteries from the metallic contact. The SwitchBot Meter requires that you physically insert the batteries (which are provided in the package) and then close the lid back.

Both of these devices have a single button on their rear panel and it serves the same purpose. If you press it once, it will switch between Celsius and Fahrenheit, but, if you long press it (2-3 seconds), it will start the Bluetooth pairing. In case you want to return the device to its factory settings, then long press the button for 15 seconds.

Of course, I do need to mention the magnetic rear side for each SwitchBot Meter models, since this way, it’s easy to attach them to a fridge or any other appliance. And the manufacturer has also added a double sided glue strip in the packages if you want to attach the meters to any other surface. I do prefer to leave it on the desk and both models sit just fine.

I have already mentioned that the display used on the SwitchBot Meter is an e-ink and it’s pretty much the same on the Meter Plus as well. So, it’s black and white, no backlight, but it is clear if there’s some light in the room.

There are two main values displayed at all times, the Temperature and the Humidity levels detected by the inner sensors and there is also the battery life as well. What sets the SwitchBot Meter Plus apart a bit is the additional mood icon on the left corner which says Comfort and, when the temperature goes high, it just disappears. If the humidity is very high, you will also be able to see the Wet icon as well.

If you thought installing the SwitchBot Color Bulb was easy, well, the Meter and the Meter Plus do set the bar even higher. After inserting the batteries (or taking out the plastic piece from the Meter Plus), the devices should start showing the data and yes, at first, it won’t be accurate, but in about five minutes, it will get far better at telling both the temperature and humidity.

Then, you need to install the SwitchBot app and either create a new account or log into an existing one (it vehemently requires your location). Since these devices use Bluetooth for connection, it doesn’t really matter if you’re using a VPN or not. That being said, access the interface, tap on the Plus sign and either locate the SwitchBot Meter (or Meter Plus) from the list or just wait for it to be detected.

It should take a few seconds, but you’ll see it at the top. Tap on it and then follow the instructions, which aren’t that many. Click on the button from the rear of the sensor and wait for the Bluetooth icon to start flashing on the display. Tap Next and the SwitchBot Meter or Meter Plus should now be paired to the app (again, the Room selection doesn’t work).

The mobile app user interface is simple and it shows data over the last Hour, Day, Week, Month and Year. The data is of course, the Temperature and the Humidity and, if you go lower, you’ll see that there is a way to Export this Data (csv format), as well as Clear it.

I do need to mention that the app would sometimes fail to retrieve any previously saved data, but after a restart, it seems that it could display the last 24 hours of info. I also noticed that it was Loading something forever at the top. And this has happened with the SwitchBot Meter and the Meter Plus, so it’s an app thing.

There are some Settings available as well if you tap on the cogwheel icon in the top right corner. Here, you an choose which data will be displayed, you can calibrate the sensors if the data seems inaccurate, you can change the temperature unit, upgrade the firmware and more. The SwitchBot Meter and the Meter Plus can be used with Alexa, Google Home, Siri Shortcuts and SmartThings, but not by itself.

You do need to use the SwitchBot Hub Mini as well. This has also been the case with the SwitchBot Curtain and the process is pretty much the same.

Are the sensors accurate?

All the manufacturer has disclosed is that it uses a Swiss-made sensor to detect the temperature and the humidity and you know that you can’t go wrong with the world’s most famous watchmakers right? There is obviously some marketing fluff here, but the sensors do seem fairly accurate. 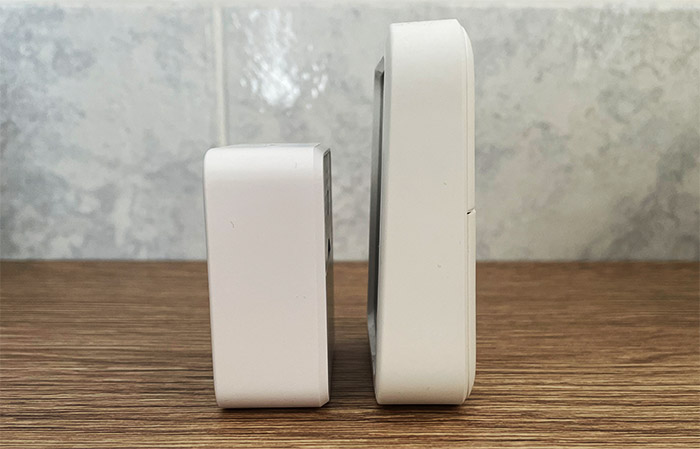 I mean, they’re as accurate as my wall-mounted thermostat. And I did like that both the SwitchBot Meter and the Meter Plus showed roughly the same values when put next to each other – not identical which makes me think that they’re not all identically calibrated. If the reading seems off, you can use the Calibration tool from the app, so that the sensor will be better at detecting the correct temperature and the humidity level.

Like I said in the intro, both the SwitchBot Meter and the Meter Plus are fairly simple devices, but are necessary for a complete smart home system. You can pair them with various devices and they’ll work fine with smart assistants if you decide to use the Hub Mini as well. The case is magnetic and the readings are fairly accurate, as well as easy to read (especially on the Meter Plus), so if you’re building a smart house revolving around the SwitchBot ecosystem, do give these two devices a try. 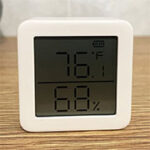