The novelty of the WiFi mesh systems is slowly fading away and the market now offers a far larger variety of devices to choose from, but, while a Netgear Orbi or an Eero system may be the first options that a tech savvy person will take into account, the regular user may still be a bit reluctant spending more than 100 bucks on a router replacement.

And this is where the Tenda Nova MW3 WiFi system comes into play, promising to cover a large area with WiFi by using a proprietary adaptation of the mesh technology, as well as an easy to use setup and configuration process, all that (and more) at a far inferior cost than its main competitors (also, even if we started to get WiFi6 systems, the Tenda Nova uses the WiFi5 standard). Considering that we’re dealing with a dual-band system, its competitors should be the Google WiFi (and the newest Nest WiFi), the Deco M5 and the newest Eero, all built on the Qualcomm platform. 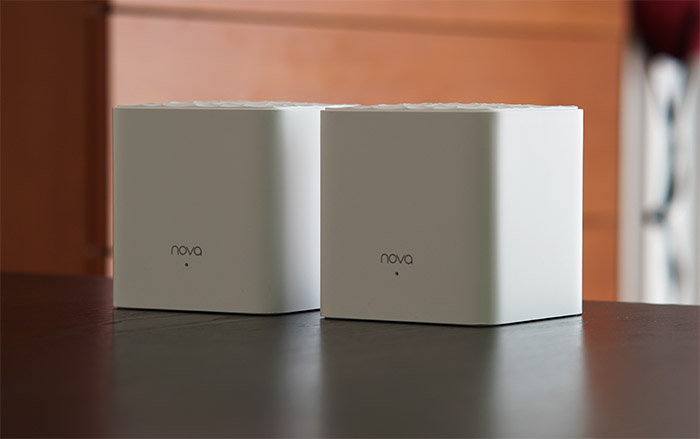 There’s also Asus’s bold approach to allow its users to interconnect older routers with newer ones and create a custom mesh WiFi system (AiMesh). But, the Nova MW3 can’t really compete with any of these systems and it’s not the fact that it’s built on the Realtek platform, it’s the highly uninspired decision to go with a couple of Fast Ethernet ports instead of Gigabit. I know that there are people with a sub-100Mbps Internet plan that will prefer this inexpensive WiFi system over its competitors, but future-proofing is out of discussion at this point. That being said, let’s have a closer look at its design, the wireless performance and the software user experience.

Design
Some may say that there is no more room for originality in the mesh WiFi systems market, but when AmpliFi proudly pushes a front display along with a bottom facing LED, it’s clear that the users still appreciate any creative design element that makes the device stand out of the crowd. The Tenda Nova MW3 preferred the unobtrusive, yet elegant look of the Google WiFi, but liked the cubic AmpliFi HD, so, we’re dealing with one, two or three identical rectangular units covered by a white matte finish and each Nova cube is slightly bit taller than the Orbi RBK13 units (which also have the textured top in common, so Netgear did take some inspiration from the Nova system). Despite being cubic, there are no sharp angles and the plastic wraps around forming soft rounded corners; there are also no external antennas and, if it wasn’t for the ports on the rear side of each unit, you wouldn’t guess that were actually dealing with networking devices. 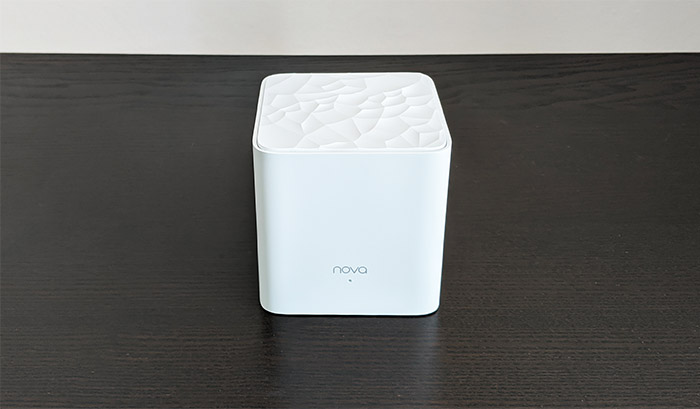 This just shows the influence that Apple had (and still has) on this department even after leaving behind the Airport series (which was the first to challenge the traditional design of the router). But, even if the mesh systems adopted a minimalist look, due to the lack of ventilation cut-outs, some manufacturers had to make their units huge (the case of the tri-band Orbi and Velop), but the dual-band (and some tri-band) systems have managed to keep the devices incredibly small. The Tenda Nova is clearly not the smallest, but, at its 3.54 x 3.54 x 3.54 inches, it’s definitely compact enough to find its place on a shelf or on the desk, especially because of its cubic shape. But, the disadvantage of most, if not all WiFi systems is that they can’t be mounted on the wall or ceiling, a feature lost from the traditional router which, despite being larger and having huge antennas, it was a lot more flexible. The Tenda Nova MW3 is quite unique in this regard since it has added a couple of mounting holes on the bottom of the case (next to the into label).

One thing that I also noticed is just how incredibly lightweight each of the Tenda Nova MW3 are (each device weighs about 0.22 lb) and this does take away a bit from the expected premium feel. Furthermore, there are not bottom feet to keep a Nova unit in place and, if I added multiple cables, the device will move around on the desk. As I mentioned before, there are no ventilation holes anywhere on the case and since Tenda relies on passive cooling, the units can get hot while functioning: while I was running some tests, I did notice that the Nova units started getting only a bit warm around the case, but the devices never showed any signs that they may overheat. 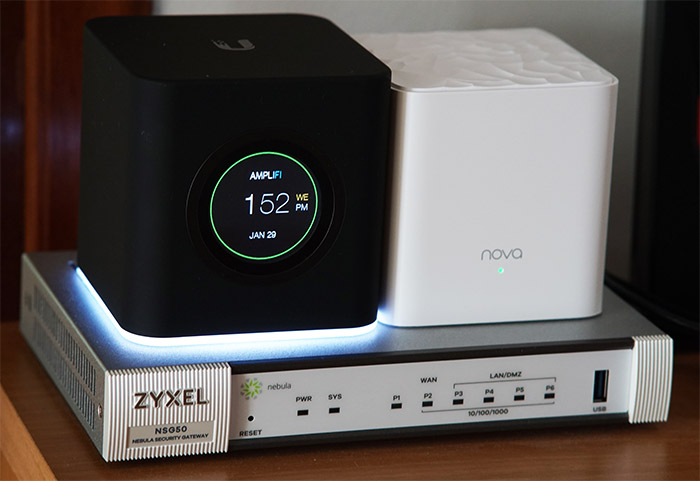 Besides the simple and minimalist exterior, one other characteristic of the mesh WiFi systems is the single LED that has the role of showing the status of the device and the connection. Each Tenda Nova MW3 unit has a small LED immediately underneath the logo which will become solid green when the main unit is working properly (on the secondary units, it means that there is a good connection between them and the main Nova – a solid yellow LED on the secondary nodes indicates a fair connection and solid red LED means that the units are disconnected from the main Nova); when the main unit is connected to the Internet, the LED will flash slow (to indicate activity) and, if it blinks fast, then the device is returning to the default factory settings.

It’s not a secret that I do prefer the array of LEDs, each with its own icon to display the status of the network and the device more accurately, but the WiFi systems don’t seem to want to move past the single LED approach, so we’re going to have to settle for a less intuitive system (the exception seems to be AmpliFi HD / HD GE with its small display). 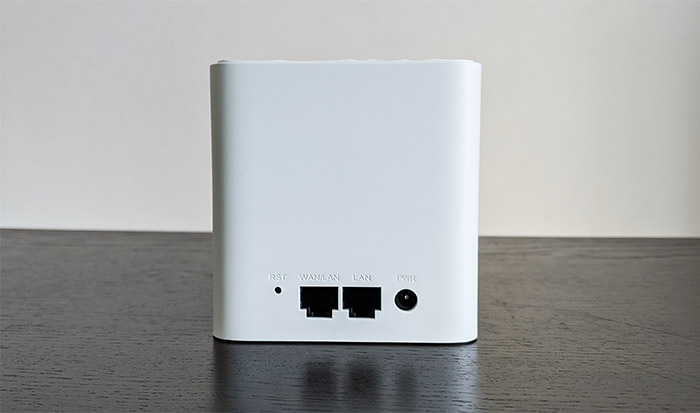 On the rear side of each Nova MW3 unit, there are four cut-outs for the Reset button (it’s recessed, so you’ll need a pin to access it – press and hold it for 7 seconds to return the device to its factory settings), the two Ethernet ports (one for the connection to the modem for the first unit and the other for connecting a wired client – on the secondary units, both ports can be used for wired clients) and a Power connector (I noticed a small misalignment on the power connector, but the cable still enters without problems). The two Ethernet ports are not Gigabit, instead, the manufacturer decided to go with Fast Ethernet, so the wired clients are crippled to a sub-100Mbps throughput – I know that this was a cost-cutting decision and that there is a public for a Fast Ethernet WiFi system, but it still feels unacceptable for any device released in the last couple of years.

Hardware
After I opened the case of one Tenda Nova MW3 unit (they’re all identical), I noticed that the board sits at the bottom and the two (10036382 V1.1) antennas sit upwards, next to the tall plastic case – the rest is empty to help keep the temperature at a decent level. 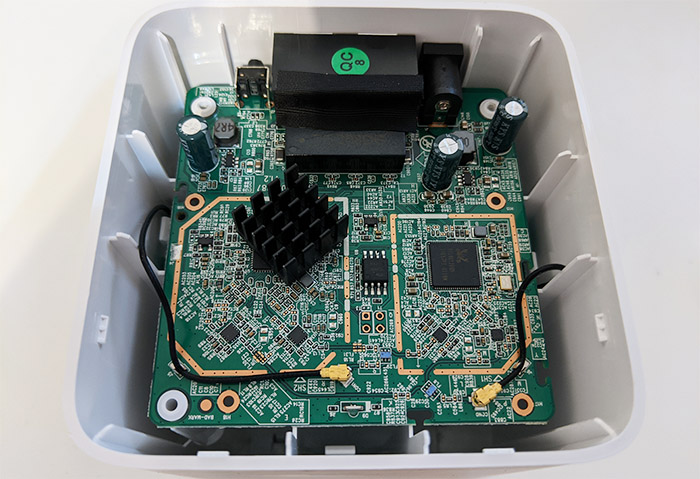 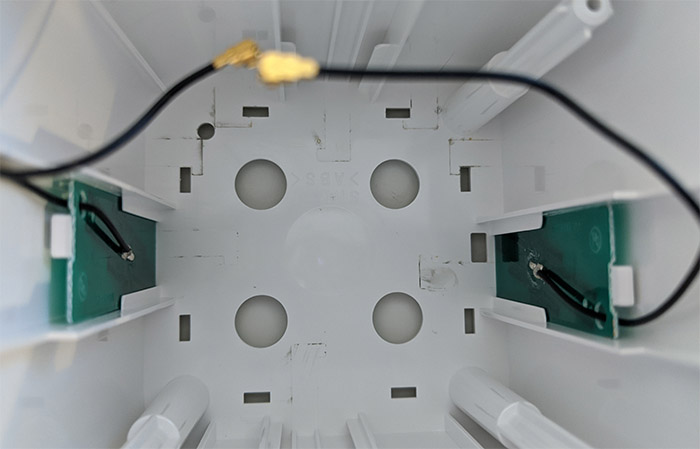 Features and Performance
The first Google WiFi is now more than three years old and the first Eero is five years old, which means that Tenda did took its time before releasing its own version of a WiFi systems, but, despite being newer than its competitors, it still uses the same technology to inter-connect more than one unit, forming a mesh network. The premise is very similar to the main unit + extender setup, but there are some adjustments to make sure the bandwidth doesn’t suffer that much from the backhaul traffic and that the user can seamlessly move from one node to the other without experiencing any disconnections. First of all, it does abide to the mesh properties, which means that there are optimized paths for the data to pass from node to node, minimizing the interference and avoiding any node congestion; there’s also the self-healing ability which makes sure that the data arrives to the destination using any other node in case one Nova unit fails and, lastly, if the user decides to add a new node to the network, it will immediately become a functional part of the mesh network. 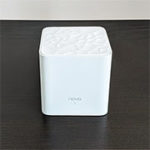