The TicWatch Pro 2020 was released in the US about two months ago and I know that some of you were expecting some radical changes but this smartwatch is simply the refreshed version of the Mobvoi TicWatch Pro from 2018 (the name kind of gives it away).

The exterior seems to be the same as with the first TicWatch Pro, but the new smartwatch has become significantly more rugged, gaining the the MIL-STD-810G rating, which should ensure that the device will survive extreme temperatures, shocks and some other industrial-type hazards.
The display has also remained the same, which is good news considering that the double screen is the feature that made the entire TicWatch series so attractive (due to the significant gains in battery life) and inside, while it still sports the aging Snapdragon Wear 2100 chipset, you do get 1GB of RAM (double than the amount of the original TicWatch Pro). 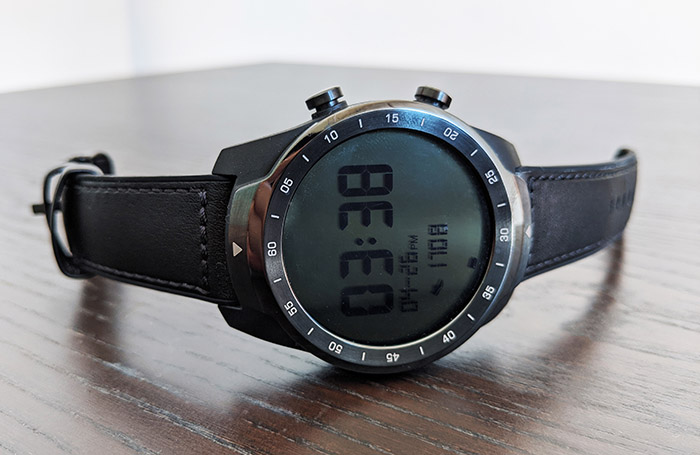 This upgrade does help with how the interface feels and behaves (it’s a lot snappier), but this is pretty much all that’s new with this refreshed version. The good news is that the price tag has remained very similar to the first gen TicWatch Pro, so, if you were on the market for a smartwatch, this is a fantastic option, but if you want to upgrade from the first gen TicWatch Pro, is it really worth it? Let’s find out.

ALSO CHECK OUT: THE BEST RUGGED SMARTWATCHES OF 2020


Design and Build Quality
If you put the Mobvoi TicWatch Pro and the TicWatch Pro 2020 next to each other, there is absolutely no visual difference between the two device, so the main body is still made out of graphite (it’s still black and rough to the touch), while the bottom side (which touches your skin) is metallic, with a couple of cut-outs to make way for the charging contact points and the dynamic optical heart rate monitor. On the top, you can see the same familiar bezels with white numbers printed on them and yes, there’s still a significant protrusion to allow some degree of protection for the display against mechanical shocks, but be aware that the screen is always going to be vulnerable to direct hits from sharp objects. 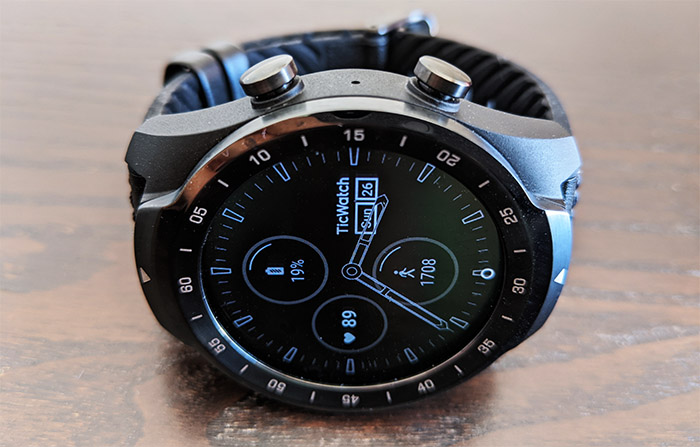 As before, the display is still covered by Corning Gorilla Glass 3, so, there is some protection against scratches and, in case it breaks, the glass will not shatter, throwing shards everywhere.
On the right side, Mobvoi has also kept the two buttons which are very reactive and easy to operate, the one towards the top having the role to power on/off the device (press and hold it for a few seconds), but it will also activate the voice assistant and, if you push it once, it will summon the app list (or return to the Home screen).

The other button can be used to launch the default app, which is the Movoi fitness suite (you can customize it) and, if you press and hold the button, it will take you to the shortcut menu; you can also set the payment app to open when you double tap this button. In order to be rugged, a smartwatch needs to be larger than usual (unless some cool technological breakthrough will render the glass unbreakable), which is why some manufacturers have made available their device in multiple sizes. The TicWatch Pro 2020 is available in a single size, the 22mm, but that doesn’t mean you won’t be able to match it to a more formal attire. 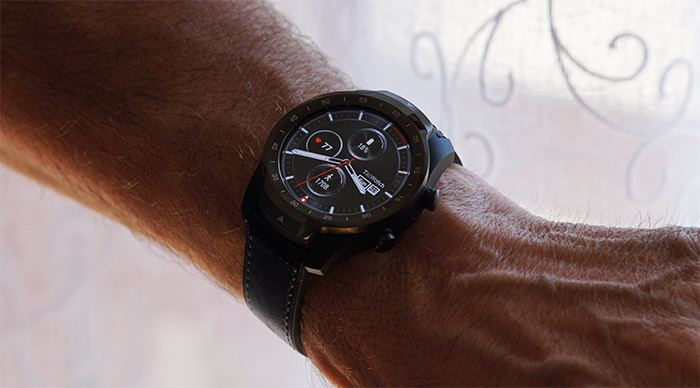 Quite the contrary since Mobvoi has focused towards keeping the look of the smartwatch as classy as possible (the watch faces are also a bit more conservative, so there is no Mickey Mouse watch face available) and that hybrid leather strap is also an important element to help the watch look more premium (the top is black leather, while the underside is made of silicone). Similarly to the original TicWatch Pro, the 2020 version weighs 2.06 ounces (without the straps), so it’s quite lightweight despite its size. I don’t have the thickest wrists which means that whenever I use a heavier watch, it always ends up upside down – the TicWatch Pro doesn’t seem to suffer from this problem since even if it’s a bit on the large side, it doesn’t feel heavy and the strap doesn’t allow it to move around on my wrist, which is a big plus.

It’s also worth mentioning that the straps can easily be removed using a small pin and after they will get worn out, you do get the option to purchase new ones from third-party manufacturers. The device has an IP68 rating, so it’s going to survive a dusty environment (as well as sand, so don’t worry about the watch while you’re on the beach) and it will do just fine when you submerge it down to 5 feet of fresh water for a maximum of 30 minutes (salt water is corrosive so stay clear of it). 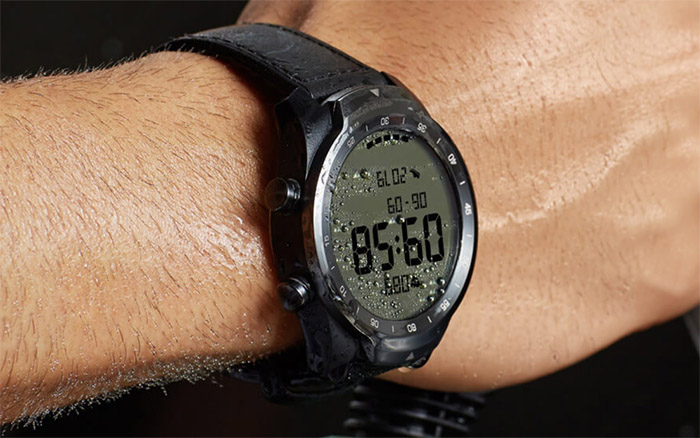 One of the key improvement is the added MIL-STD-810G rating and I’m not entirely sure for what range was the smartwatch tested, but Mobvoi says that the device should now withstand more extreme temperatures (between -31 degrees F and 158 F – and it will remain operational when the temperature ranges between -4 and 131 degrees F), it will survive when the humidity is up to 95%, when the pressure goes up to 57kpa, as well as if there is salt fog in the environment or when it’s subjected to shocks (don’t know which specific types of shock) – apparently, it will not fare that great in oily environments.Like I said before, there isn’t a design difference between the 2018 and the 2020 TicWatch Pro, so, at least to my eye, it doesn’t look like they used different materials, but perhaps there are some layers inside the smartwatch to make it more resistant.
Note: Besides the all-black version that I currently test, the TicWatch Pro 2020 is also available in silver.

Internal Hardware and Display
I know that a lot of people really expected that the smartwatch would take off years ago and that it would get close in popularity to the smartphone, but it’s still not quite there. Well, it’s actually far from it, although it’s clearly more widespread as before mostly because of Apple and its Apple Watch series, while Google was the one that may have halted the progress of Wear OS smartwatches. It’s not a complete stop, since there still are some updates now and then, but the only manufacturers to truly keep it alive are Fossil and TicWatch – Samsung anticipated this move and quickly created its own operating system called Tizen. Samsung has also developed its own smartwatch chip (Equinox), while both Fossil and TicWatch have to rely on the Snapdragon chipsets.

It’s interesting to see that the TicWatch Pro 2020 is not equipped with the more recent Wear 3100 model and instead it’s still sporting the same old Snapdragon Wear 2100 chipset (as well as the 4GB internal storage). I have been using the smartwatch for a few days and I don’t really see any problems with it mostly because it’s a lot faster due to the 1GB of RAM, so the Wear 2100 should be enough for at least another year (although, I would have liked to see the battery improvements of the newer chip on this smartwatch as well).

Like I said before, the big news for this device is the increased RAM and, as expected, it does indeed make a difference in how the interface reacts to your input – the pages move faster, the apps open a lot quicker and overall, it feels more snappier than before. I do wonder whether a new chipset is being developed by Snapdragon and if this smartwatch may actually be just a stop-gap for the next generation – this is pure speculation, but it would also allow Google to develop its presumed Pixel Watch and undercutting its competitors by releasing it with a newer and better chipset from the get-go (which is why Samsung went its own way since Google is known for its unorthodox practices – the Pixel smartphones are still a big middle finger to the manufacturers that rely on Android as the OS). 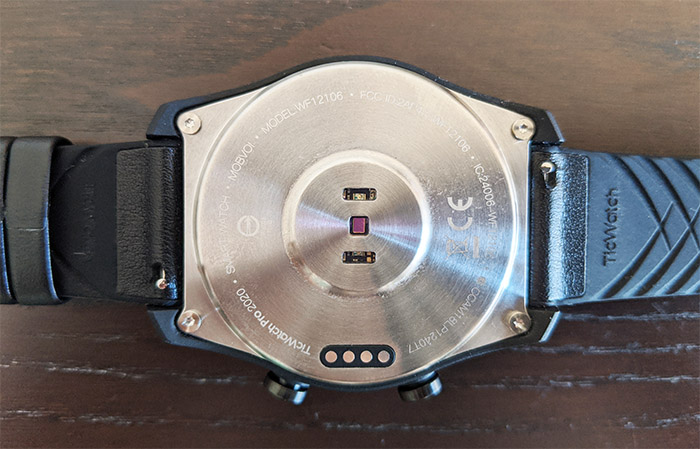 Note: In terms of connectivity, the TicWatch Pro 2020 supports the older Bluetooth 4.2 LE, the 801.11 b/g/n WiFi standard and, in terms of sensors, it is equipped with an accelerometer, a geomagnetic sensor, an ambient light sensor, a Gyro sensor and a Heart Rate monitor; there’s also GPS, Galileo, GLONASS and Beidou, and it also uses NFC (for payments).
The display was left unchanged from the original TicWatch Pro and it’s as they say, why fix what isn’t broken? TicWatch has managed to attract a lot of attention from the beginning with its dual layered display and its for good reason since you basically get more battery life while sacrificing nothing.

Indeed, the TicWatch Pro 2020 has a bottom AMOLED display with which you will interact and, when you’re done using it, it turns off allowing the monochrome LCD display from above it to show you the time, the date, the number of steps that you have taken and the battery life (it does not have a back light). On most other smartwatches, you either get the option to have an always-on screen (which will drain your battery life) or to have it completely turned off when you’re not using it or checking the time. The TicWatch Pro also allows you to have an always-on screen, but why would you bother using it when the LCD screen is already there to always show you the time and other useful info – as a minor complaint, I would have liked to be able to customize the default watch face. 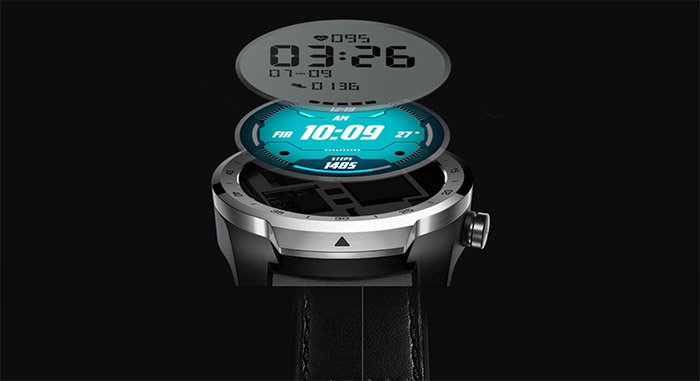 The main OLED layer has a 400×400 resolution and 287 ppi pixel density, so it’s a decent display, with good color reproduction and sharp text. I had no problem reading the notifications directly from the watch, the interface icons look defined and even under direct sunlight, the OLED display was viewable and the text readable. 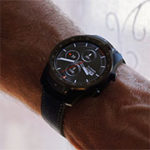