I have tested these two routers and you can check the separate articles (Asus RT-AC86U and the Asus RT-AX86U), but, since the WiFi 5 client that I used when checking out the throughput of the RT-AX86U was a laptop equipped with an Intel 8265, I retested the RT-AC86U with this client to be able to confront the results between the two devices. It’s also worth noting that the Asus RT-AX86U was tested using an TP-Link TX3000E WiFi adapter, while the RT-AC86U was tested using a client equipped with an Asus PCE-AC88. That being said, the RT-AC86U has been a great performer and, while the client was connected to the 5GHz network (the channel bandwidth set at 80MHz), I got 792Mbps at 5 feet and an amazing 740Mbps at 30 feet, downstream; from the server to the client, I saw 310 Mbps at 5 feet and 240 Mbps at 30 feet. 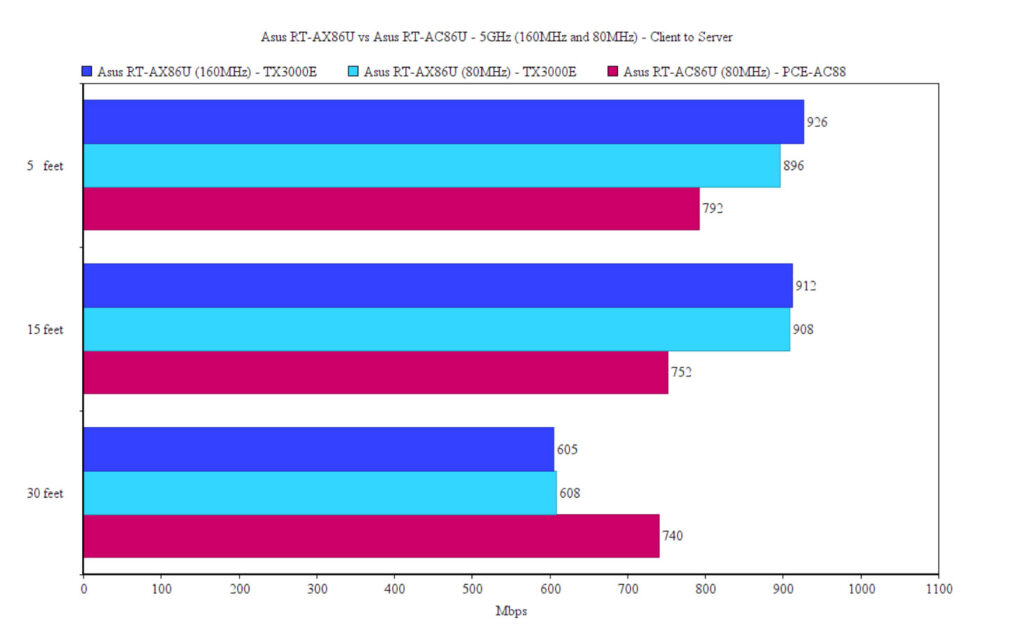 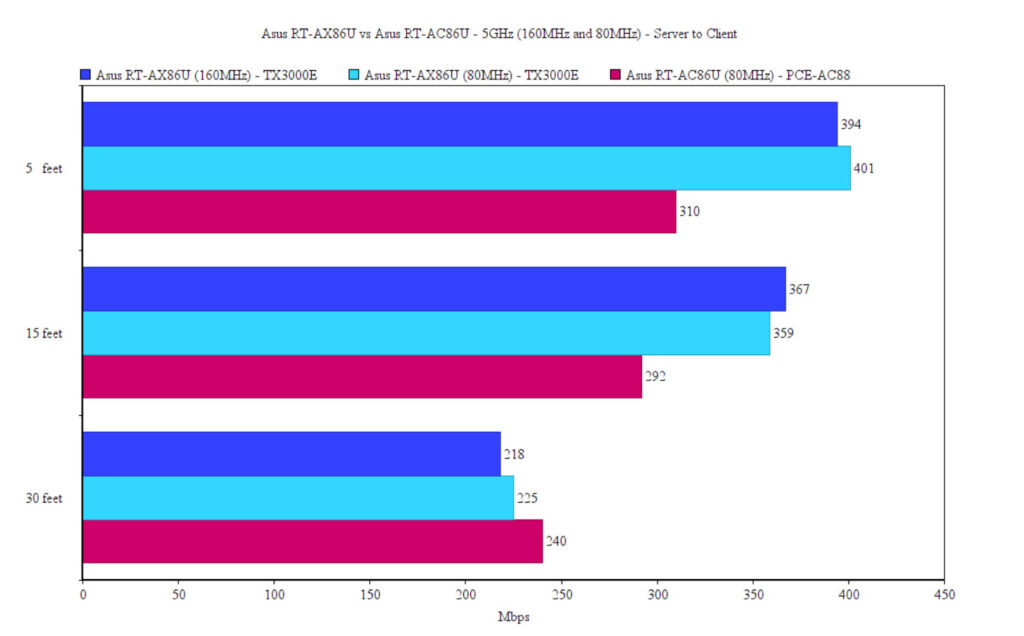 Keeping the same client, but switching to the 2.4GHz network, I measured an average of 173.4Mbps at 5 feet from the client to the server and an average of 208 Mbps at 30 feet. These are the results that I got a couple of years ago and they’re very good considering that we’re dealing with a WiFi 5 router. Now, I have tested the Asus RT-AX86U very recently with a compatible client and the results on both the 80MHz and 160MHz are amazing, going far above the performance of the RT-AC86U which shows the potential of this new WiFi standard (it will only get better). 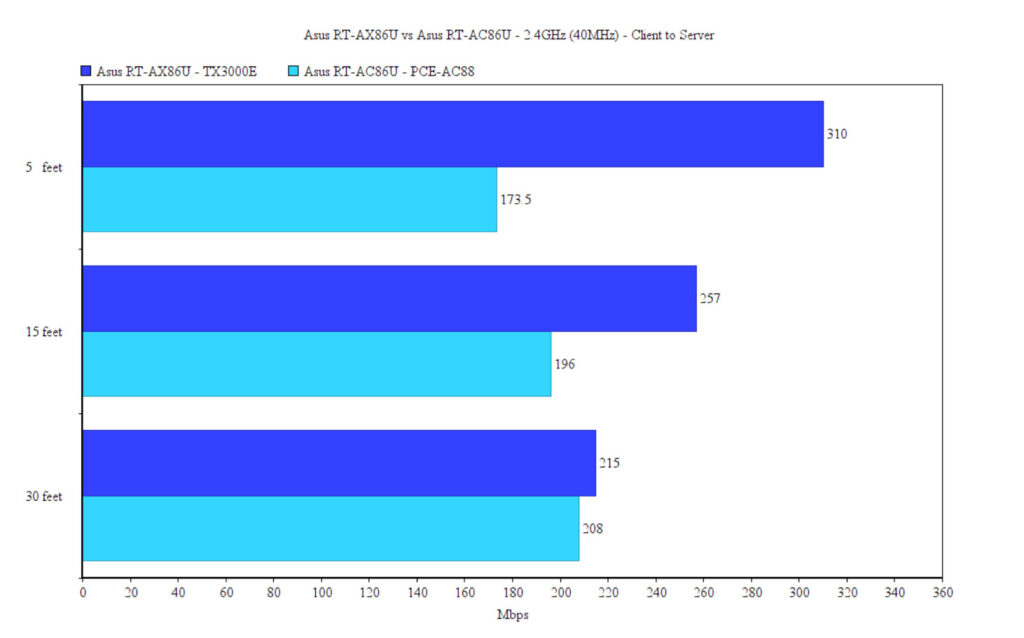 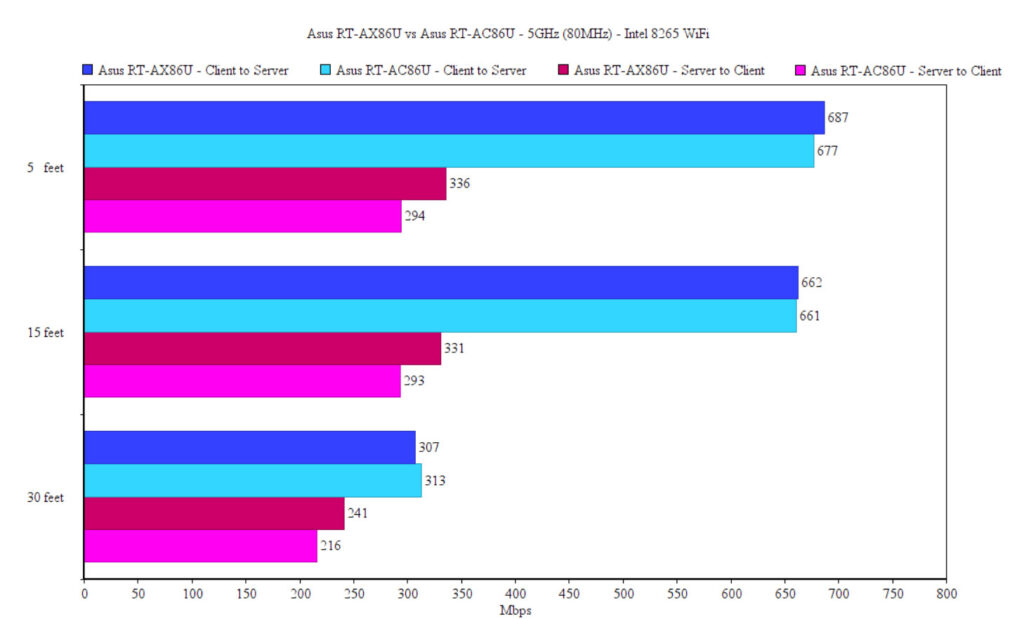 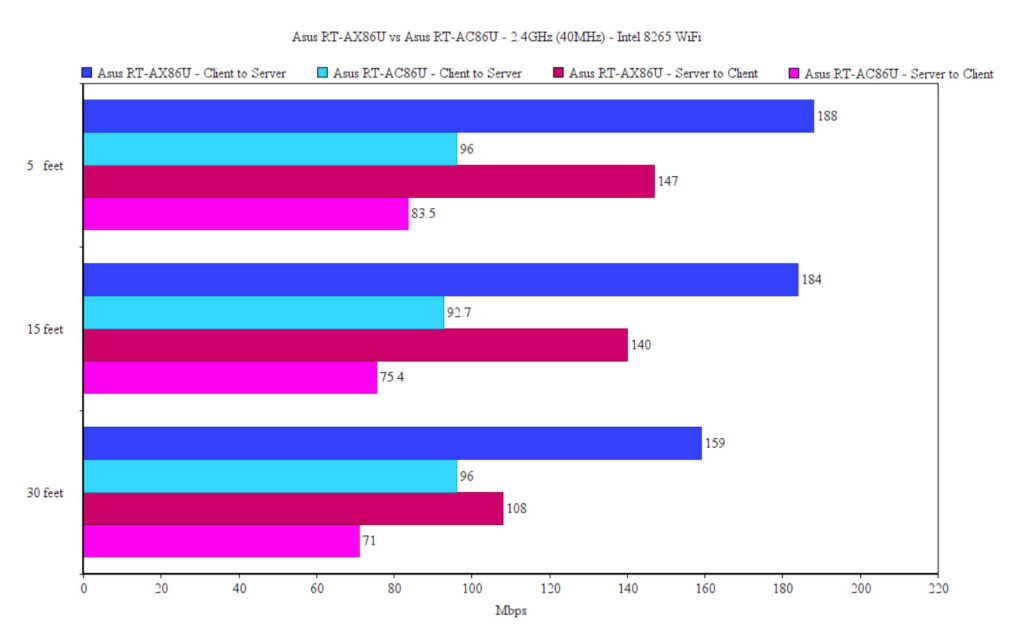 Lastly, I checked out the storage performance which was excellent on the RT-AC86U (it was actually one of its strong points) – it delivered a read speed of 113 MBps and a writing speed of 67 MBps. The Asus RT-AX86U has delivered a strong performance as well: the reading speed was 112 MBps and the writing speed was 103 MBps.
Verdict: It’s clear that the Asus RT-AX86U beats the RT-AC86U at every turn, so it easily wins this round, but only if you have compatible clients, otherwise, there isn’t a huge difference between the two devices in terms of performance.

The installation wizard can either be run using the mobile application or by relying on the web-based interface (the latter requires that you either enter 192.168.50.1 in the URL or go to router.asus.com) and, regardless of the choice, it’s going to be an easy process. I usually prefer the app and the steps should be pretty much the same for both routers: select the appropriate group of devices, set up the Internet connection (if it’s PPPoE, then enter the username and passkey given by the ISP), set the WiFi network/s and create an admin account. At first glance, the app main window is the same for both the Asus RT-AC86U and the RT-AX86U, so you get to see some statistics about the router or the network (including some live data) and you can also enable the Mobile Game Mode (yes, both routers have this feature). This Mode gives the mobile device that you’re using the highest priority, so you’re getting a better gaming experience – and I’m mostly talking about Cloud streaming platforms, since there you’ll need a better Ping.

The main page will also display some AiMesh data and, if you tap on Family, you can configure the Parental Controls (which are equal on both routers) – you can add devices to a profile and set schedules for when the Internet access will be blocked which is not that much, but the good news is that you do get far more options on the web-based UI.

The web-based GUI is also very similar for both routers since you still get the General and Advanced Settings menu on the left where you get a better view of the AiMesh functions (it’s redesigned and far better than it was three years ago), you can enable AiProtection (Two-Way IPs and IDS) and you can go seriously in-depth with the Wireless settings (especially if you use the Professional section).

I saw that both routers support Dual-WAN (FailOver and FailBack), where the Asus RT-AX86U does have the advantage of the secondary 2.5Gbps WAN port and, since both routers are suitable for gamers, there are some dedicated features on each device. The Asus RT-AX86U allows you to create Game Profiles or rely on preset ones under Open NAT and you can push some devices to a higher priority in the list if you want to play some online games. The Asus RT-AC86U prides itself with the WTFast GPN which is essentially a private network that you can use to get a better latency in case you’re trying to play from a server that’s too far away from your current location. 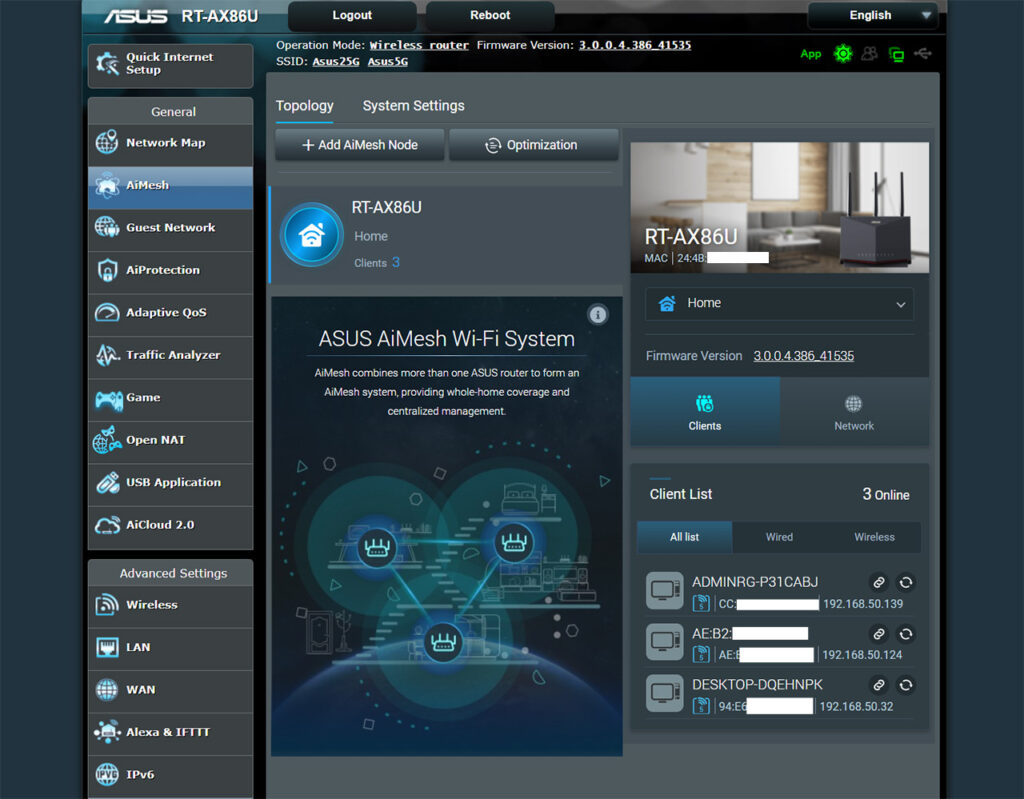 Verdict: It’s very easy to set up either of the two routers, the mobile application is very similar to both the RT-AC86U and the RT-AX86U and the web-based interface is, as always very comprehensive and easy to use. Furthermore, it seems that both models are supported by the third-party AsusWRT-Merlin software, so this round ends in a tie.

It’s obvious that the Asus RT-AX86U is a far better router than the Asus RT-AC86U in pretty much in every way. You get a 2.5Gbps WAN/LAN port, the wireless performance is way better when using WiFi 6 clients, it has the horsepower to handle heavy applications so why am I holding back at fully recommending it over the RT-AC86U? It’s the lack of WiFi 6 client devices (well, there are a few, but far less than the WiFi 5 devices) and then, there’s the WiFi 6E that’s confusing everyone. If you have the budget and are confident that you’re going to use most of the WiFi 6 features with at least one client device, then go with the Asus RT-AX86U since it’s a great router, otherwise, there hasn’t been a better time than now to get the best from the previous generation, so, if WiFi 6 doesn’t interest you yet (and for at least another couple of years), then the Asus RT-AC86U is still a no-brainer.