The Asus RT-AX88U and the RT-AX86U are two of the most powerful dual-band WiFi 6 routers from the Taiwanese manufacturer and while there are a few radically different aspects, after I tested both devices, I came to the conclusion that they’re really not that different. And this seems to apply to far more WiFi 6 routers considering that they’re simply not as clearly differentiated as the devices from the WiFi 5 standard (even though the price tag may suggest otherwise). In any case, the RT-AX88U is the first WiFi 6 router developed by Asus (and one of the first in the entire market), so, a lot of the current features were enabled over the course of the last year and a half, currently being on the same level as the newer Asus RT-AX86U. There’s OFDMA, MU-MIMO, TWT and the support for AiMesh is something that you’ll find on both routers. 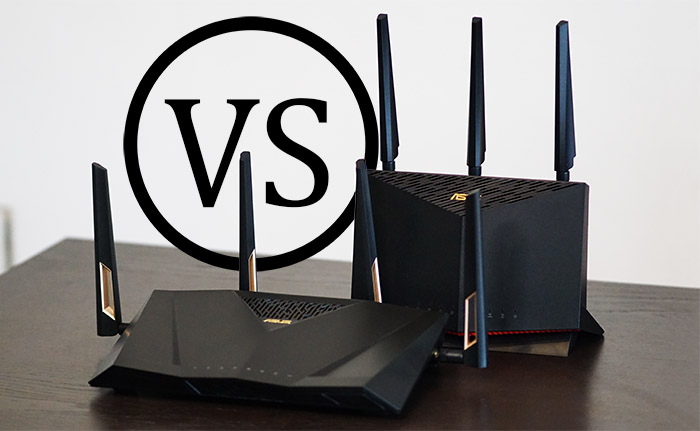 The Asus RT-AX86U is supposedly the successor to the RT-AC86U, but again, the way it’s equipped and some of its features put it in a league of its own, while the RT-AX68U seems to be far closer to the RT-AC86U (they even share the same processor). Indeed, if you are familiar with the WiFi 5 Asus routers, things get a bit more confusing with the newer series and considering that a lot of you are interested whether the dual-band flagship Asus RT-AX88U is better than the RT-AX86U, let’s go a bit more in-depth and see which is the best option.

Note: You can also check out the individual analysis of each wireless router here: Asus RT-AX86U and Asus RT-AX88U.

The Asus RT-AX88U has essentially the same design as the RT-AC88U, minus the red accents from the antennas, so it’s just as big (11.8 x 7.4 x 2.5 inches), but fairly cool looking even after so many years have passed since the original was released. While the RT-AX88U sits horizontally and can be mounted on the wall, the RT-AX86U’s case was inspired by the RT-AC86U, so it only sits vertically and it occupies very little space from the desk (it measures 9.44 x 6.41 x 3.14 inches and it cannot be mounted on the wall). Both routers have taken the heat management very seriously, so there are lots of cut-out areas (mostly on the bottom or the rear side, but also in an interesting shape near or around the logo) – this way, neither router was at the risk of overheating (they barely got warm while functioning). Asus has kept the array of LEDs on both routers, so you can easily check the network and the connection status, but be aware that the RT-AX88U only has one LED for all of its LAN ports. 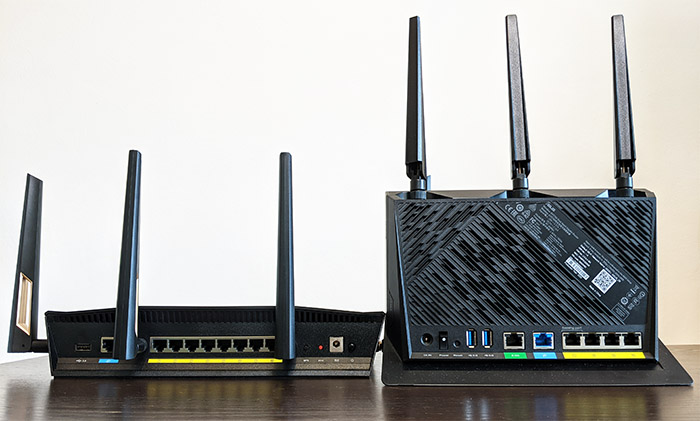 And that’s because there are eight of them. Indeed, the RT-AX88U was built to accommodate a large number of wired clients, especially those that are very sensitive to latency (gaming devices). The Asus RT-AX86U offers only the regular set of four LAN ports, but it does come with an interesting element: a 2.5Gbps port. And it’s not only a LAN port, it can also work as a WAN port, along with the already existing 1GbE WAN port – you get the option to aggregate them (this option is also available on the RT-AX88U, but with another LAN port or external USB modem). Furthermore, both routers have two USB 3.0 port (the RT-AX88U has one hidden on the front) and, while the RT-AX86U has three external antennas, there is a fourth inside the case, so both routers have four antennas as well.

From the internal hardware point of view, as you can see from the table, these two routers are very similar, with only a few differences, such as the Ethernet switch controller which is expected considering the amount and the type of ports on each device. Furthermore, I could also see that the 2.4GHz WiFi chipsets are different, the RT-AX88U seemingly at an advantage in this regard.

As I said in the intro, the Asus RT-AX88U had a lot of its features enabled over the course of a year and a half, but I am going to focus on its current state which doesn’t differ all that much from the Asus RT-AX86U (I have checked these devices at their current latest firmware: both were on the v3.0.0.4.386.42095). It’s also worth mentioning that the RT-AX88U is WiFi 6 certified, while the RT-AX86U is technically still in draft stage, but at this point it’s fair to say that this certification seems to be a bit of marketing fluff (well, at least in regards to these two routers). In any case, both of these powerful routers do make use of the OFDMA and you can enable it on both bands (ul+dl) from the Professional section in the web-based interface.

This feature takes the channel bandwidth and it divides it in small orthogonal resource units that are then allocated to serve the simultaneous communication with connected access points. This way, the smaller frames are handled far more efficiently, while the larger ones can remain unaffected (since the resource units can vary in size).
Additionally, both routers support MU-MIMO and BeamForming which are welcomed technologies that can improve the wireless performance in case you do have compatible clients (and most vendors don’t bother adding the support, unfortunately). Finally, there is support for AiMesh, so you can use either of the two routers as a mesh node in a larger network, easily competing with the pre-made WiFi mesh systems. I have tested the RT-AX56U and the RT-AX58U in a mesh network and the performance was better than expected, so I assume the RT-AX86U and the RT-AX88U will perform far better (will also cost a lot more).