The EnGenius ECW220 is the second WiFi 6 access point from the Cloud Managed series that’s designed for indoor use and yes, it’s less equipped than the current flagship model, the ECW230, but it’s not just a stripped down model. Not at all. We are dealing with a far more compact wireless access point (which has kept the same cool look of the ECW230) and it does require less power from your switch (or PoE adapter).

Everything else is very similar to the other model from the series, so we do get OFDMA (both uplink and downlink) and TWT, there’s MU-MIMO which has been downgraded to 2×2:2 and the 2.5GbE port on the ECW230 was replaced by a regular 1Gbps Ethernet port. The internal hardware is also slightly altered, since we do get less flash storage and there is a small downgrade in the WiFi chips department.
Even so, the EnGenius ECW220 should be more than able to cover a large area with WiFi and to handle multiple wireless clients without problems (especially since it has the same amount of RAM as the ECW230). 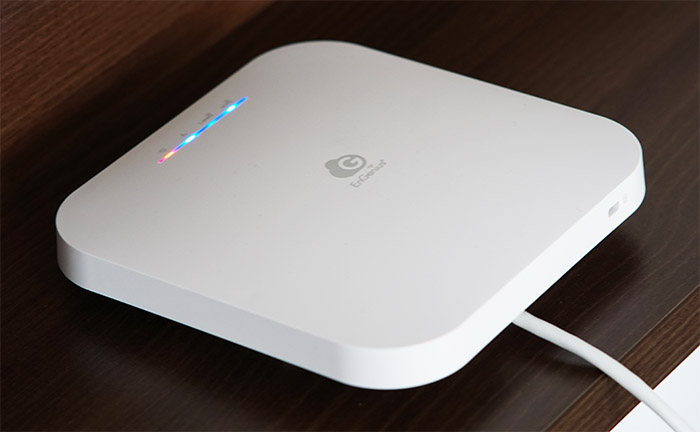 The software experience will be the same as with other Cloud managed access points from EnGenius which means that the standalone utility is very basic, so the ECW220 will need to be adopted into the EnGenius Cloud platform. This way, you will be able to easily monitor and configure the access point alongside other multiple types of EnGenius hardware. This means that the targeted audience will mostly consist of SMBs and perhaps some home tech enthusiasts, so, without further ado, let’s put the ECW220 to the test.
Note: The access point that I got for testing is the ECW220v2 and, when compared with the first version, EnGenius says that the newer variant has received more memory.

The EnGenius ECW220 is essentially a smaller version of the ECW230, so it does feature a similarly-shaped rectangular case with rounded corners. Furthermore the top section is made of ABS plastic, while the bottom is made of a metallic alloy and what’s interesting is that despite having a very similar type of internal hardware as its larger sibling, the ECW220 is not bulkier. So yes, the access point has kept a slim profile and, at 6.3 x 6.3 x 1.3 inches, it rivals the compact nature of the Ubiquiti nanoHD which is impressive for a WiFi 6 device.

If we pair the hard plastic top with the metallic bottom section, it does seem like the ECW220 has a premium feel and look, especially due to the minimalist design. There is nothing else than a gray logo and the narrow LED band, so the device will easily blend in with a ceiling and it’s clear that the ECW220, as well as the ECW230 remain some of the best designed access points of the market, including both WiFi 5 and WiFi 6 devices.

But, being compact does usually mean that the device will have more trouble keeping the internal temperature in check. It’s true that the EnGenius ECW220 can get warm and even a bit hot on the metallic part of the case, but that’s because the manufacturer pushes the heat from the chipset directly towards the enclosure using a thermal pad.

So, even if the bottom of the access point is going to be hot, this does not mean that the device has trouble handling the increased temperature. The ECW220 was designed to be mounted on the ceiling, so it has a couple of mounting ears protruding from the bottom of the case and inside the package, there are a couple of mounting brackets that you can slide between the aforementioned ears or you can simply attach the AP to a wall relying only on a couple of screws. 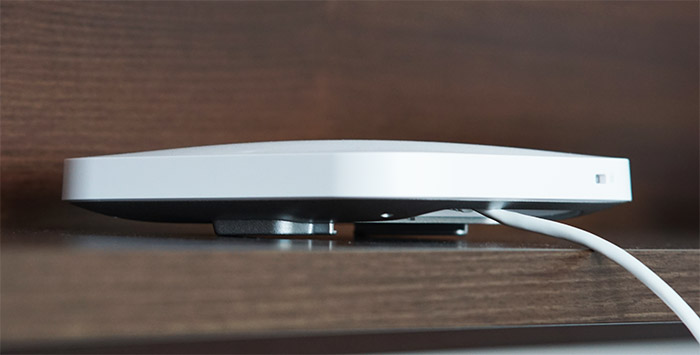 I do like that EnGenius did not give into the single LED approach that a lot of devices seem to prefer nowadays (they may as well not have any LEDs), so, inside the narrow band, the ECW220 has four LEDs, the first being the Power LED (it will flash orange while waiting to be paired to the Cloud platform and it will become solid orange after you pair it), followed by the LAN LED, the 2.4GHz LED and the 5GHz LED, all being solid blue. The LEDs can be very bright, despite the narrow opening, but you do get the option to turn off all or individual LEDs from the Cloud management platform. Returning to the bottom of the WiFi 6 access point, it does have the same carved in area as the ECW230 and inside it, there’s a recessed Reset button (press and hold it for 10 seconds to return the device to its factory settings), a DC 12V power port and a LAN port.

The Gigabit LAN port supports the 802.3af PoE standard and it requires up to 12.8W of power, so the AP can be used with most PoE switches on the market, even the cheaper ones. There is, of course, the option to simply power on the device using a power adapter, but be aware that there isn’t one in the package (nor an Ethernet one, which I found a bit strange). Lastly, there’s a small Kensington key slot next to the ports area. 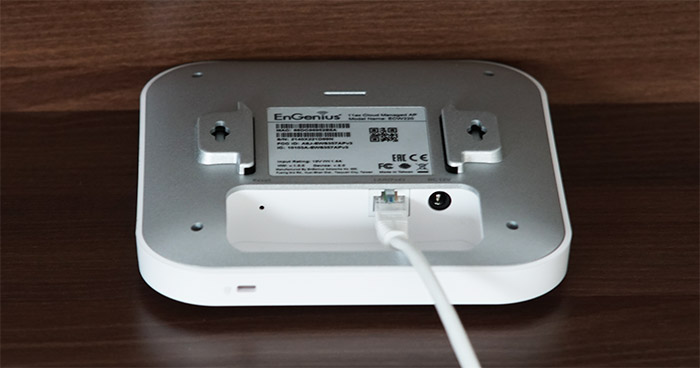 In order to open up the access point, you need to remove the four screws from the rear side of the case (there is no warranty void sticker) and then simply slide up the plastic top section. This way, you will get a good view of the PCB with the four antennas connected to the metallic part of the case. This side of the PCB doesn’t have anything that interests us, so I removed the two screws and turned the board upside down. 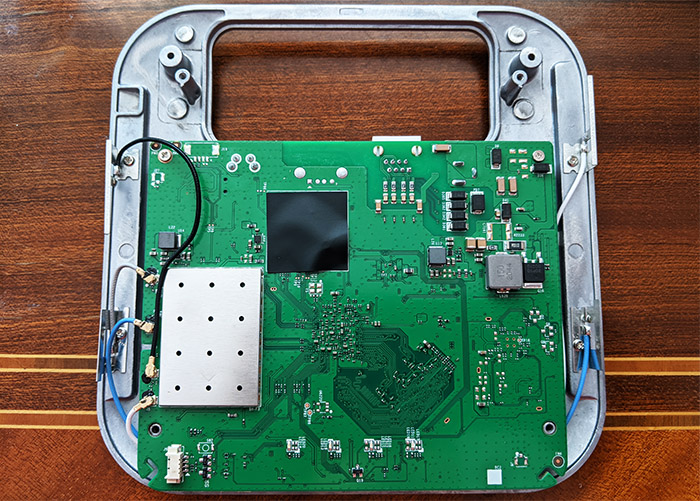 The main components have aluminum covers and between the board and the metallic case, there is a heat conductive pad to help dissipate the heat and maintain a proper internal temperature (as I mentioned in the previous section, this is the reason why the bottom of the device is usually hot).

Note: The EnGenius ECW220 is an AX1775-class wireless access point and the maximum theoretical data transfer rate on the 2.4GHz radio is 574Mbps, while on the 5GHz, it’s 1,200Mbps.

In terms of wireless features, the EnGenius ECW220 doesn’t differ that much from the ECW230, both wireless access points making use of OFDMA, MU-MIMO (2×2 vs 4×4 of the better equipped WiFi 6 model) and BeamForming. The OFDMA (Orthogonal Frequency-Division Multiple Access) tech has been at the center of the new 802.11ax standard and for good reason since it offers the means to establish simultaneous data transfer with multiple clients. To be more specific, OFDMA divides the channel bandwidth into smaller sub-carriers that can differ in size and, this way, the packets of data can be transmitted faster and more efficiently (the efficiency can be best seen with smaller data packets). 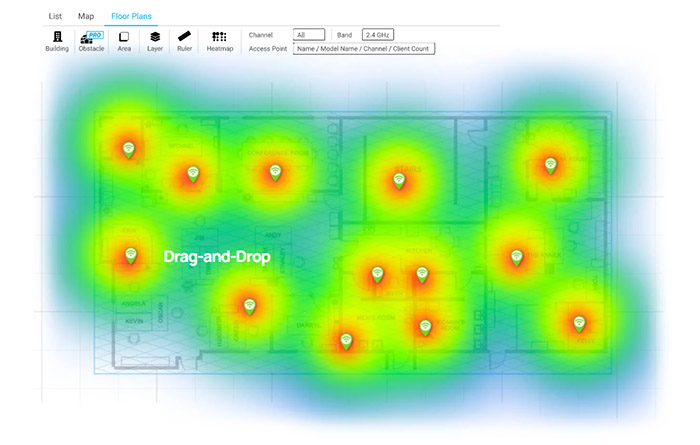 The MU-MIMO is the same as it was on the WiFi 5 standard, so it still promises to serve more than one client device at the same time (the ones that are compatible), instead of using the round-robin approach and there’s also the promise of wide adoption which still hasn’t happened over the last decade of promises from manufacturers.
The BeamForming technology is used to improve the wireless performance by focusing the signal directly towards the clients instead of broadcasting it everywhere in the hopes that it will reach the devices – this way, there is less interference and, usually, a better throughput. The EnGenius ECW220 also supports 1024-QAM modulation, but the channel bandwidth is limited to 80MHz, just like on the ECW230, which is fine for most users. 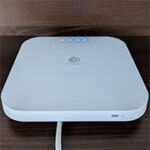