I am familiar with EnGenius from its SMB-focused networking devices (mostly with the wireless access points series) and I admit that I was a bit surprised to see that the manufacturer decided last year to set foot into the consumer market not with one, but two WiFi systems, the dual-band EnGenius ESR530 and the tri-band ESR580.

The demand for tri-band WiFi systems is far less than for the dual-band systems, so the AC1300 EnGenius ESR530 has entered a very competitive niche where it has to go against the likes of Google WiFi, Eero 2019 (Amazon had to push its newly acquired brand world-wide), the Deco M5 and pretty much any other dual-band WiFi system from the last 3 years.
Even so, EnGenius is confident that it can outdo its competitors from the price to performance standpoint which means that the system should be able to cover your entire house with reliable WiFi and it promises to offer an easy-to-use application, all that at a lower cost. 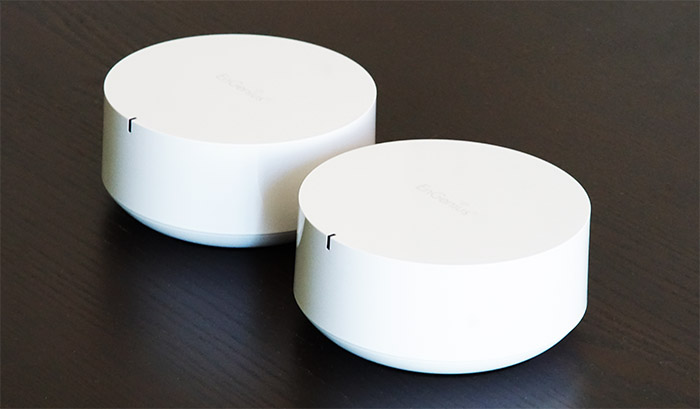 Furthermore, some of the features that you can expect are the Ethernet backhaul (useful for heavy networks that require multiple hops), the mesh technology (a proprietary implementation) and MU-MIMO (if you have compatible clients). Perhaps the novelty element wore off, but this way, the WiFi system has passed from the cool gadget stage to a mature networking device and since it’s never a bad thing to have more options to choose from, let’s have a closer look at the EnGenius ESR530 and see if it can deliver on its promises.

The EnGenius ESR530 WiFi system is available as a single puck or as two in a package (at the moment of writing, there’s a promotion on the official website to get a third one for free) and each device is identical to each other, featuring a small cylindrical plastic case covered by a white glossy finish (yes, it does retain fingerprints). EnGenius clearly took some inspiration from Google WiFi (and why not, it’s a good design), keeping the look of the units as clean and simple as possible, so expect just the EnGenius logo on the top side and a small and narrow LED on the corner (very similar to the LED from the Eero WiFi second gen) and not much else to break the minimalist look – it’s worth mentioning the small hole for the Reset button on the opposite side of the LED which you can press and hold (using a paper clip) for about eleven seconds to return the router to its factory default settings. 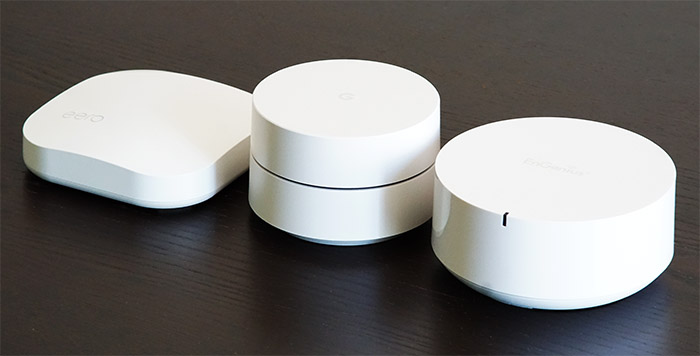 Each puck measures about 5.78 x 5.90 x 3.79 inches and weighs approximately 1.17 lbs, so you shouldn’t have too much trouble finding some space on the desk for it. Similarly built devices, such as the Eero 2nd Gen and the Google WiFi need to be kept in the open due to the lack of ventilation cut-outs and these devices can get hot if they don’t have enough room. Opening up the Google WiFi (and the Eero WiFi system) has shown that the internal hardware is a bit crammed due to some intricate antenna pattern, but EnGenius seems to have left enough space inside the case as to maintain a decent internal temperature: the routers get only lightly warm at the top and warmer near the ports, but nothing more. If you don’t have enough space on the desk, the EnGenius ESR530 can be mounted on the wall using the couple of dedicated mounting holes from the bottom (this way, it ends up looking very similar to the EnGenius EAP1250 access point) – inside the package, the manufacturer has added a couple of screws for each unit.

To keep the device minimalist, almost all manufacturers of WiFi mesh systems went with a single LED approach and, as can be seen, this is also the case of the EnGenius ESR530 which relies on a small LED to show the status of the device and the network. If the LED is solid blue, then everything is working fine and the network is properly set up, otherwise, if it flashes red, then there’s a connection problem; the LED will also let you know if the secondary nodes are too far from the main unit (it will flash orange) – unfortunately, there is no documentation on the functions of the LED, so it’s a bit of a guessing game. Flip the device upside down and you will be able to see the info label, three silicone feet to keep the unit into place and then there’s a cavity for the ports area: from the left, there’s the DC Power connector, a Gigabit WAN port, a Gigabit LAN port and a USB 2.0 port for adding external storage devices. 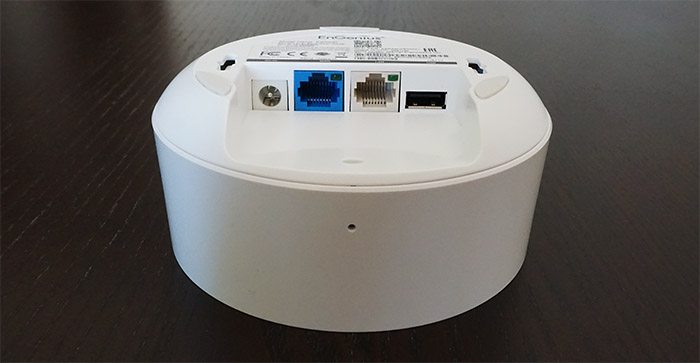 Of course, only the main unit will use the WAN port, while on the secondary nodes, the port can be used for connecting wired clients or for the Ethernet backhaul. It’s also worth mentioning that while I appreciate the fact that EnGenius has added a USB port, the way it is positioned doesn’t allow you to connect most USB drives and so far, I only had luck with some portable SSDs which come with a small cable (such as the SanDisk Extreme or the WD My Passport).

If you want to open up the case of an EnGenius ESR530, you need to remove two screws from the bottom side (one is hidden underneath the middle silicone pad) and the two plastic parts should easily detach afterwards – be aware that this can void the warranty. After that, you will be able to see the four antenna cables which can be disconnected from their slots (EnGenius has added a special adhesive to keep them in place) and then you’ll get the full view of the PCB. 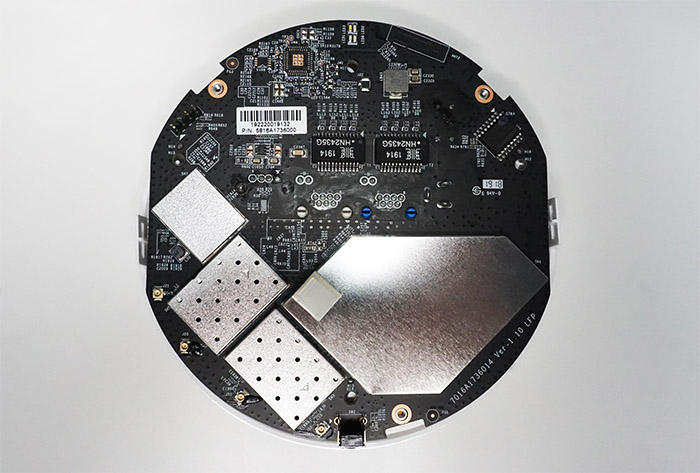 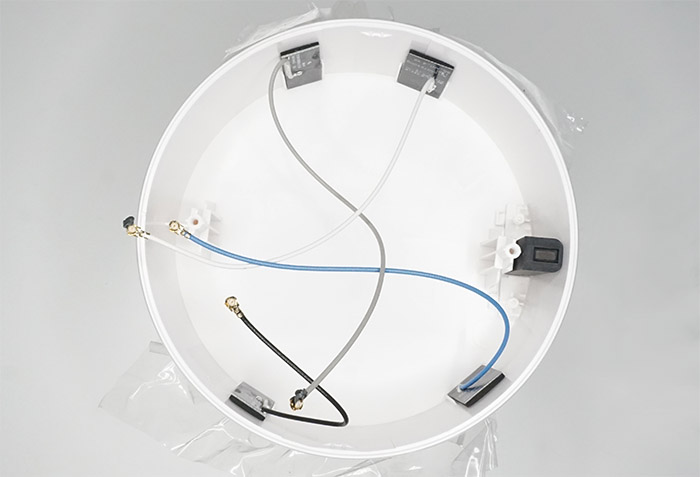 The centerpiece feature of all WiFi systems is the ability to interconnect multiple units and form a single network, allowing the user to roam from one node to the other without needing to switch to another network. This has been achieved using the mesh technology and, as expected each manufacturer has made a proprietary, close-gated implementation of this tech in order to keep the compatibility at the brand level. The EnGenius ESR530 also makes use of the mesh technology to interconnect multiple units (it’s called Smart Link) and its properties are pretty much the same as on other devices. One router connects to the modem (this will become the main unit), while the other units are going to be positioned around the house in key locations to ensure that every corner receives the WiFi signal – the main property of the Smart Link is that it create optimized paths using the available nodes, so the data can arrive at the destination as fast as possible using the least crowded nodes. 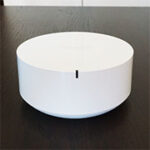