The Netgear RAX43 or AX5 can be considered a mid-range WiFi 6 router and it sits a bit above the RAX40 (the second generation!), but immediately below the Netgear RAX50. And, when put next to the RAX50, there really aren’t that many differences, with the exception of the less powerful 5GHz radio band (I will open the router and see what Netgear added there).

It’s also linked to the support for 5 simultaneous data streams as opposed to the 6 streams of the RAX50 (I do find the 5×5 MIMO a bit peculiar). The Netgear RAX43 also advertises the support for Smart Parental Controls and the Netgear Armor, but be very aware that those are subscription-based services and you can only use them for free for a month. 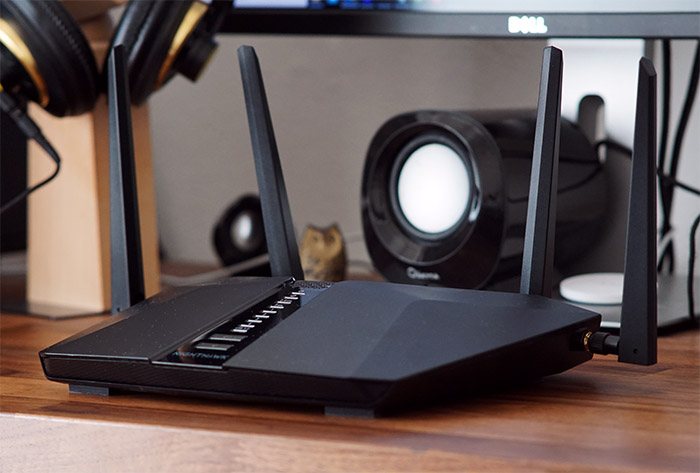 So, what’s so special about the Netgear Nighthawk RAX43? Well, it does support the usually-found WiFi 6 features, such as OFDMA and TWT, and there’s also support for 160MHz channel bandwidth, 1024-QAM and MU-MIMO (as expected). There are no gaming features (those are left for the DumaOS), so, yes, the Netgear Nighthawk RAX43′ reason of existence is to cover the area between the RAX40 and the RAX50. It’s also interesting that I haven’t yet seen an AX4200-class router until now (besides the mesh node from Linksys), so I assume Netgear is trying to persuade other manufacturers to go this route as well. That being said, let’s put the Netgear AX4 RAX43 to the test and see if it’s worth investing in this wireless router.

In terms of design, the Netgear RAX43 still follows the Nighthawk series guidelines, so it’s a dynamic-looking device, with sharp corners and the entire case resembles the look of some military plane (this has been the case since the early days of the R7000). And yes, the RAX43 is identical (design-wise) to the Netgear RAX50. Both have four detachable antennas (unlike the fixed ones on the RAX40), both have that black matte finish with a glossy portion in the middle for the LEDs + some buttons and both have the ports section on the rear side. As you may have guessed, they’re also identical in terms of size, the RAX43 and the RAX50 measuring 11.65 x 8.11 x 2.25 inches and they’re also just as heavy (1.25lbs). 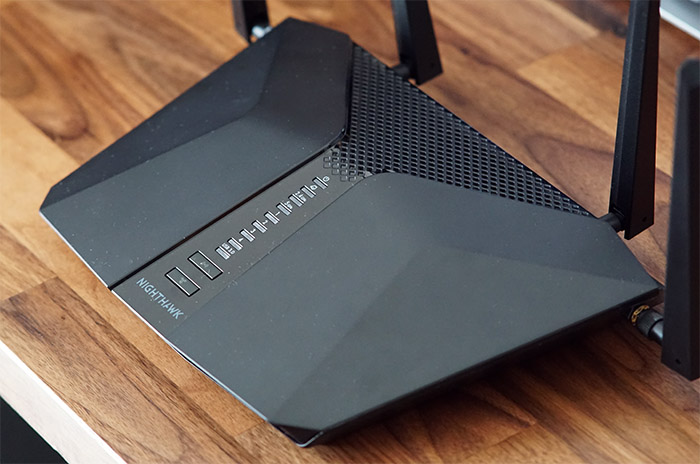 So yes, Netgear has definitely recycled the plastic case for these two router. Not that I complain since I really like the design and the LEDs look great during the night – it’s just that they could have made the Netgear RAX43 a bit more compact because when put next to some of the Asus routers, this one looks enormous.
And it will take some space from the desk (there are four silicone feet to keep it steady), but the good news is that you can mount the router on the wall thanks to the two dedicated holes on the bottom.

As for the heat management, Netgear covered the entire bottom section with holes and there are some more subtle ventilation grills on the rear and top side as well. Was it enough to keep the device running at a decent temperature? I decided to use a thermal camera (from a phone, the AGM Glory Pro) and you can see the result yourself – it seems to be doing decently well. 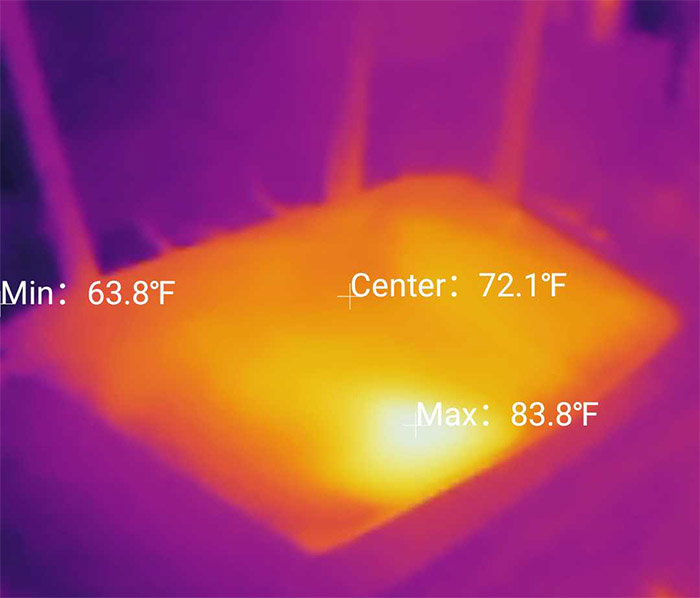 At the top of the router, Netgear has decided to add a comprehensive array of LEDs and I applaud the decision to not go with the single LED approach. So, from, the top, there’s the Power LED, the Internet LED followed by the two LEDs that show the status of the radio bands (2.4GHz and 5GHz). Further down, the manufacturer added one LED for each LAN port and lastly, there’s an LED that shows the status of the USB port. There are also two buttons with LEDs and the topmost one will turn on or off the WiFi (press and hold it for about 2 seconds), while the second enables the WPS. I did not see a physical button for the LEDs and it would have been a good addition since the LEDs do get a bit bright during the night.

The rear side of the router is home to the ports and some buttons, so, from the left side, we see a recessed Reset button (press and hold it for about 10 seconds to return the router to its default settings) and a USB 3.0 port (for added storage). Further to the right, there are four Gigabit Ethernet LAN ports surrounded by a metallic cover, the same as the Gigabit WAN port which sits next to them. Lastly, there is the Power port and the Power button. As you can see, there is no multi-Gigabit port here (as we saw on the Asus RT-AX86U) and it’s no surprise since the RAX50 didn’t have one either (neither does the TP-Link AX73, one of the main competitors of the RAX43). 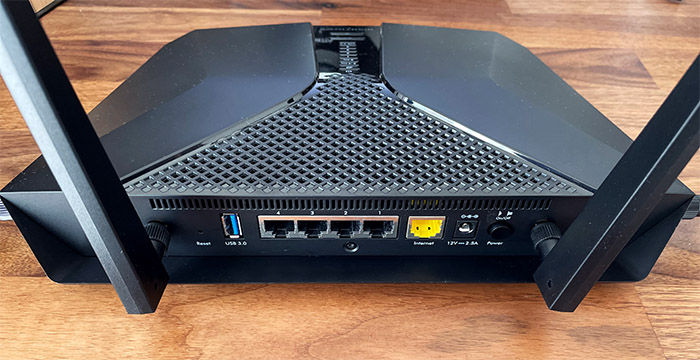 As with any other router, before opening it up, make sure that you don’t mind losing the warranty because you most likely will. The good news is that unlike Asus and TP-Link, there are no warranty void stickers. Now, be aware that there are four screws hidden underneath the silicone pads from the bottom of the router and you need to use a very thin Allen key to remove them (it won’t work with a regular screwdriver). The last screw that you need to remove is the one near the LAN ports.

After that, the top part of the router should easily pop off: after that, take a prying tool (it’s better if it’s made of plastic) and carefully detach the top cover. The PCB has a clean layout and there are several components that were covered by aluminum pieces, so I went ahead and removed them. I also detached a couple of antenna connector and one wasn’t that well attached to the head, so it fell off (and I panicked); I put it back on (and I didn’t panic anymore).

As with other WiFi 6 routers that were released the last couple of years, the Netgear Nighthawk AX5 RAX43 makes use of the OFDMA technology and it can be enabled on both the 2.4GHz and the 5GHz bands (ul & dl). This means that using compatible clients, you should see a better network performance due to the division of the channel into sub-carriers that are then shared between the multiple connected clients. The key word is, of course, compatibility, because otherwise, the RAX43 won’t perform that much better than a mid-range WiFi 5 router (we’ll put it to the test in a minute). Be aware that, in order to use OFDMA, you do need to enable it from the web-based interface because it is not enabled by default.

Besides OFDMA, there is support for Beamforming which focuses the signal towards the wireless client devices that do have support for it. And the same can be said about the MU-MIMO technology which has the role to serve multiple devices at the same time, unlike the traditional round-robin technique.

Include the 1024QAM modulation and the support for the 160MHz, and we get the entire suite for a mid-range WiFi 6 router. But, as I already mentioned, you do need to use devices that have WiFi cards which support these features. I noticed that there is no support for creating a mesh system which is a shame, but kind of understandable when you want to promote your Orbi line. At the same time, both Asus and TP-Link have their own way of creating a mesh system using older and newer router models (called AiMesh and OneMesh). So, Netgear is very much behind in this regard.

In order to see how well the Netgear RAX43 performed, I took a WiFi 6 client device that had an AX200 WiFi card installed and it did support 160MHz channel bandwidth, so, after connecting it to the 5GHz network, I saw an amazing performance upstream, at 5 feet. It really pushed the 1Gbps limit, reaching up to 938Mbps, but what was interesting is that the downstream throughput was in stark contrast, reaching only up to 287Mbps. I am fairly sure that the RAX43 can support multiple simultaneous demanding connections, but I do wonder how well the 938Mbps would fare through multiple client devices (work in progress). At 30 feet, the speed dropped to 306Mbps upstream and 201Mbps downstream and, at 45 feet, the upstream throughput was 157Mbps, while downstream, it dropped to 54.6Mbps. 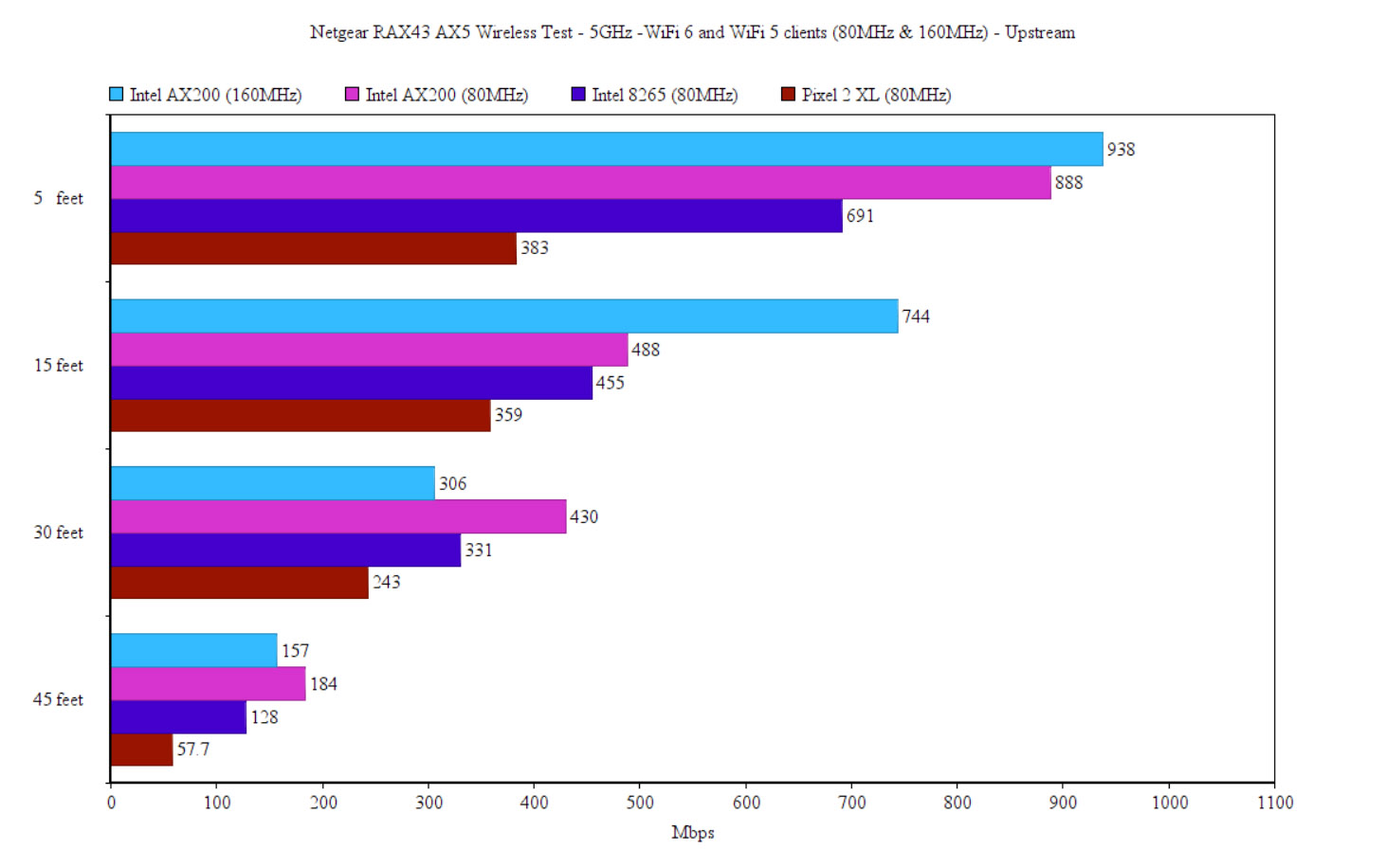 I did go farther than 45 feet, where the signal went to about 83dB (approximately 60 feet) and that’s where the connection became pretty much unusable by modern standard, unless you’re happy with 5.4Mbps upstream and 21.6Mbps downstream. I did switch to the 80MHz channel bandwidth afterwards and the Netgear RAX43 did fairly well. 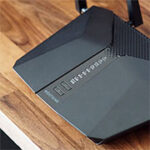