The TaoTronics AC3000 is the first WiFi system developed by the Shenzhen-based company and while most manufacturers have decided to test the waters at the beginning with a dual-band system, TaoTronics has boldly entered the market with a tri-band WiFi mesh system. This puts the TaoTronics AC3000 in the same category as the Eero Pro, Netgear Orbi and TP-Link Deco M9 Plus and to quickly become noticed in this over-competitive market, the WiFi system does come with an affordable price tag, rivaling devices such as the Google WiFi or the Eero WiFi.

Besides the extra radio band which will do wonders for the backhaul traffic, the TaoTronics WiFi mesh system also offers some of the 802.11ac WAVE 2 features, such as the support for MU-MIMO, Beamforming, as well as the support for 802.11k/v Smart Roaming and the 802.11r Fast Roaming. So, yes, it’s a very ambitious device which doesn’t seem to have cut any major corners, but, considering that the WiFi 6 is already out, why not go directly to the newer standard? 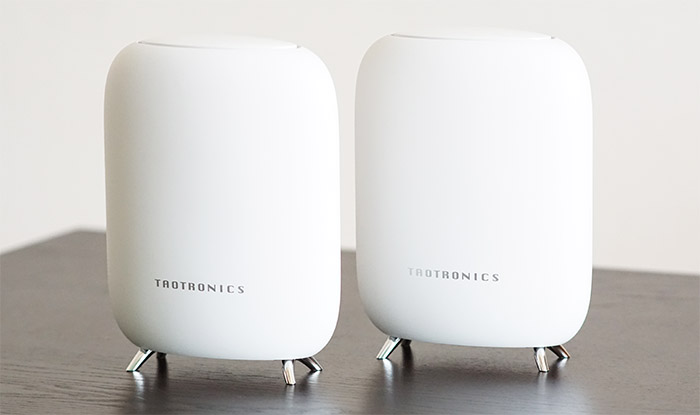 Well, first of all, the WiFi standard still has a long way until the devices will take advantage of all of its features (some of which are still in development) and secondly, the 802.11ac is probably the best WiFi standard to use now since even the high-end networking devices have gotten cheaper and most clients do have compatible adapters built in.
That being said, let’s have a closer look at the TaoTronics AC3000 tri-band WiFi mesh system and see if the manufacturer got it right on the first try.

The TaoTronics AC3000 is available as a single unit, as a two-unit package or as three routers and yes, all are identical, each featuring a fairly large pea-shaped plastic case covered by a white matte finish, except for the top section, which is glossy white. Immediately after I took one unit out of the package (I have two devices available), it became clear that the manufacturer did took some inspiration from the Netgear Orbi and it’s not only the shape that’s somewhat similar, there’s also a LED ring at the top. Sure, it may not look completely original (such as the AmpliFi HD does, if we need a proper example), but the similarities with the Orbi end towards the bottom where TaoTronics has added four feet (covered by faux-silver finish). The feet are reasonably far apart, but, considering how tall each TaoTronics TT-ND001 is (measures 8.85 x 6.3 x 2.75 inches / 22.5 x 16.0 x 7.0 cm), I would still be aware that it’s very easy to push it off the table, so I would avoid keeping it near a highly trafficked zone. 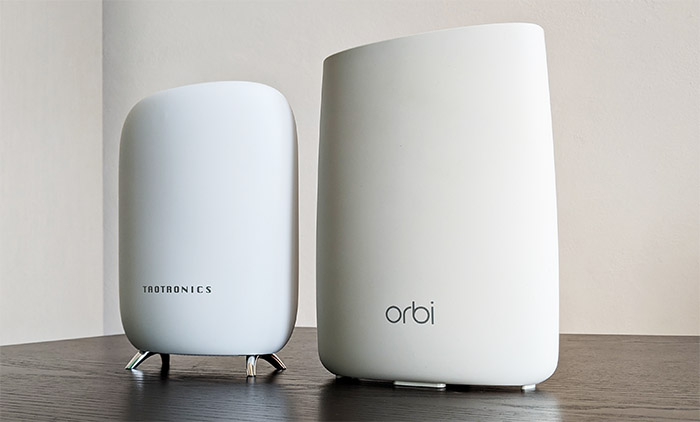 And no, the TaoTronics AC3000 cannot be mounted on the wall, something that has become a characteristic for almost all WiFi mesh systems (with very few exceptions, such as EnGenius ESR530). Another characteristic of the WiFi systems is there is more focus towards the design than with the traditional router, so most decided to keep the look as simple as possible, sometimes completely removing the much needed ventilation holes. Larger devices such as Netgear Orbi and Linksys Velop have managed to maintain themselves at a reasonable temperature due to the more space inside, as well as due to a few hidden cut-outs (well, the Velop didn’t shy away on covering its case with punctured holes).

Opening up one TaoTronics TT-ND001 unit has showed a generous space for the components and the manufacturer has added some vent holes to the bottom of the case as well as near the ports, so it should be able to maintain a proper temperature, right? Indeed, while I tested the TaoTronics AC3000 system, no unit got hot to the touch (only barely warm towards the middle).

As I said before, the LED at the top closely resembles the ring on the Netgear Orbi, but on the TaoTronics, it’s identical on each unit, unlike the Orbi, which functions differently on its main router and on the satellites. That being said, if the LED on the TT-ND001 is solid white, it means that the system is starting and, if the LED will start flashing green, then the unit is ready to be configured. The LED will become solid blue when it’s connected to a network and it’s going to be solid red if it has failed to connect to the network.

On the rear side of each unit there is a dedicated area towards the bottom where you can find a USB 3.0 port (useful for connecting external storage drives, printers and it can also provide 1A output for any compatible device) followed by four Ethernet ports (all Gigabit). On the main unit – the one that you connect to your modem – the first three ports will function as LAN ports, while the fourth will be the WAN; on any mesh node, all four Ethernet ports will be LAN ports. 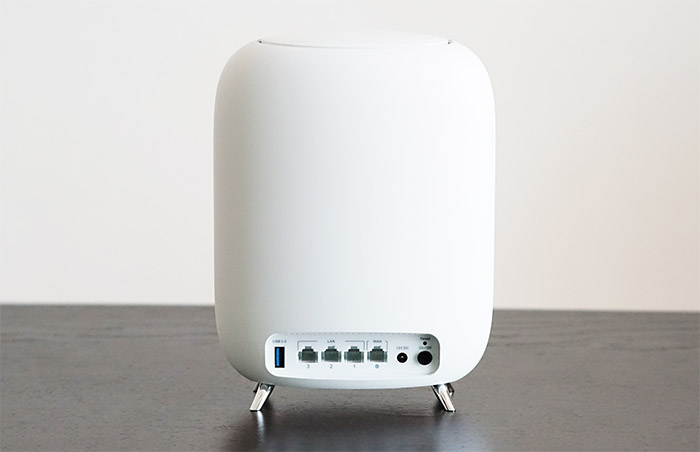 Further to the right, you’ll be able to find the 12V DC power connector, an On/Off button and a recessed Reset button (press and hold it for 6 seconds and until the top LED starts flashing red – at that point release the button and wait until the router is going to be returned to its factory default settings).

Before attempting to open up the case of the TaoTronics AC3000, be aware that this can lead to voiding the warranty. If that’s alright with you, then you first need to remove the top glossy piece of plastic (a prying tool should to the job easily – just apply a bit of force) and then remove the two screws that keep the front and rear sections together. TaoTronics has also added a couple of screws in the ports area that are hidden underneath the white sticker surrounding the ports and you should remove the feet since they also hold together the case. After that, use a prying tool and simply detach the front and rear pieces to expose the PCB and the interesting antenna layout – the antennas themselves are also unique looking. The PCB has most of its components covered by aluminum pieces and there’s also a large sink (made of some alloy which covers an aluminum piece) that, once removed, will show the Mediatek MT7621AT SoC (2012-AMTH QTPRSM51) which contains a dual-core MIPS 1004KEc CPu clocked at 880MHz. Next to it, there’s the 256 MB of DDR3 RAM from Nanya (1953 NT5CC128M16JR-EK 942188W1EL 7 TW).

All TaoTronics AC3000 devices are identical, so you can choose any unit to connect directly to the modem (which will essentially function in the same manner as a traditional router) and any new unit that you add will automatically be paired to the mesh network. And this mesh of units will have all the expected properties, such as the ability to create optimized paths for the network (depending on the signal strength, the number of clients connected to a node and so on) and there’s also the self-heal ability which makes sure that in case a node fails, another unit will immediately take its place, ensuring that the user experiences no disconnection. After having a quick look over the app interface, I noticed that the TT-ND001 relies heavily on automatic optimizations for the channel selection, the bandwidth selection and the power selection to find what the device will deem the best WiFi settings for your network and yes, you can turn them off, but I didn’t find a way to set them manually. 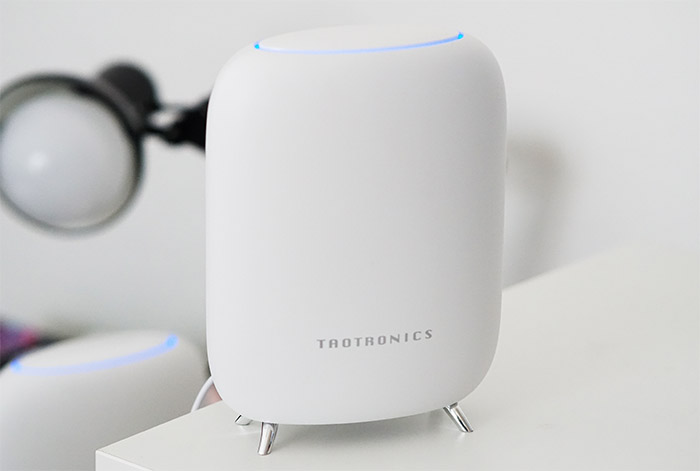 The app also allows you to enable Quick roaming, AP steering and Band steering. The roaming through the nodes is achieved with the help of the 802.11k/v or the 802.11r standards and yes, you do need to have compatible clients in order to take advantage of fast roaming feature (the authentication is done before the client begins moving between nodes, so it feels like a proper homogeneous network).
Furthermore, the TT-ND001 also uses MU-MIMO to serve multiple clients at the same time and BeamForming to point the signal directly towards the compatible clients, improving the throughput and limiting the impact of interference, but that’s the important keyword, compatible. And with the WiFi 6 out, there is a wider adoption of these previously ‘exotic’ features so, maybe in a couple of years, they’ll become the norm. 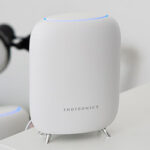