Recently, Arris released a trio of SURFboard routers (AC1200, AC1900 and AC3200) and I’m going to focus on Arris SBR-AC1900P SURFboard, which is a very interesting device: not only does it perform as a capable dual-band WiFi router, it also comes with the RipCurrent G.hn technology (Gigabit Home Networking).

I already had a look at the powerline adapter that uses this technology, the Comtrend G.hn Powerline PG-9172, and it came as a surprise to see that Arris has betted on the G.hn tech, instead the more popular HomePlug AV2. If you’re not familiar with the powerline concept, know that the RipCurrent technology uses the electrical lines from your home to send and receive data, so you don’t have to install any cables, just plug your compatible devices into a power outlet and you’re set. For a more in-depth analysis, check our guide on How to use powerline adapters to expand your network. 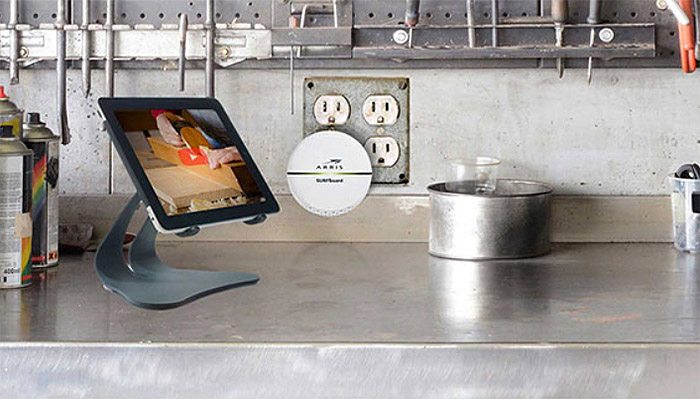 Arris has worked its way into the consumer market for quite some time and it got famous for its line of cable modems, these devices being some of the most desired and most sold for more than a decade (two of them are featured in the best DOCSIS 3.0 cable modems list, the SB6183 and the SB6141).

Surely, Arris has tried its luck with some other networking products, like WiFi extenders and WiFi routers, but it needed to come with something new and exciting in order to keep up with the current router manufacturing giants that have already moved on from the AC1900 class devices and developed AC3200 and AC5300 routers, which are packed with high-end technologies (obviously, these continuously growing numbers that seem to ‘plague’ the router market won’t make a difference unless you have the proper equipment).

Design
The design of the Arris SURFboard SBR-AC1900P is surprisingly unique, considering that the trend today is to scare the poor people with arachnophobia (Asus RT-AC5300 and Talon AD7200), but, it still may not be on everyone’s taste. The case of the SBR-AC1900P looks like a large peanut, covered by a white matte finish and sectioned in two parts, in the middle residing a narrow line for the LED lights. The body lacks any straight corners and towards the top and the bottom, the case is covered by small round holes (from which only a few have the role of airflow vents).

The SBR-AC1900P is not a small device by any means, as it measures 11.77 x 5.86 x 27.95 inches, so it may be difficult not to crowd your desk. Additionally, the router can only be positioned horizontally, so if you thought to mount it on a wall, Arris didn’t provide this possibility. And it’s understandable to a certain degree, because, the SBR-AC1900P is part of the hub-type devices, like the Google OnHub, so it wasn’t meant to sit quietly in a corner, but to be in the centre of attention (therefore the bolder design choice). I appreciate the fact that the router weighs 2.2 lbs, so you get an increased degree of stability.

If you turn the router upside-down, it will reveal two large oval feet, partially covered by a split label with info about the device (the name, model, SSID, passcode, WAN MAC address and serial number; additionally, there is a QR code that you can scan with your phone after you launch the Arris SURFboard Manager app, in order to automatically load the SSID and password and gain access to your network).

On the front side of the SURFboard SBR-AC1900P, there is a large primary LED light (part of the narrow line in between the top and bottom sections) that will be green, when everything is working fine, it will flash a red light when there is an error, it will be amber solid when the WiFi is disabled and it will flash an amber light when the WPS process is initiated. Turn the router around and on the middle right side you are greeted by an additional array of four LEDs, responsible for the G.hn signal strength (green means excellent signal, amber means fair and red shows a poor signal), the G.hn secure link (green means secured), the 2.4GHz WiFi band and the 5GHz WiFi band (flashing means WiFi activity, green signifies that the WiFi is On). 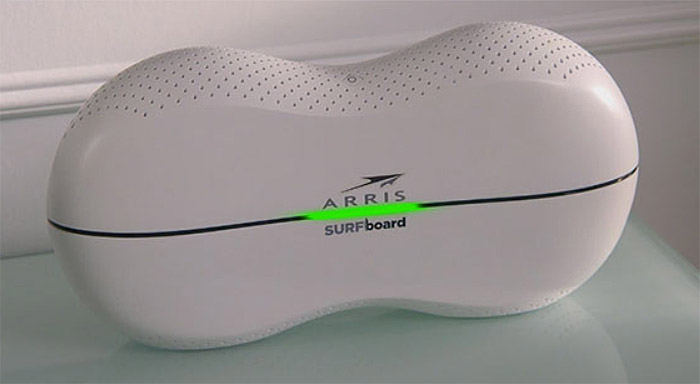 While other router have their antennas proudly pointing upwards, the SBR-AC1900P features six internal antennas that handle the WiFi connections.
Note: Inside the box, there is the SBR-AC1900P WiFi router, an AC Power cord, an Ethernet cable and a Quick Start Guide.

Performance and Connectivity
It’s clear that the main focus of the Arris SURFboard SBR-AC1900P is to be perceived as a hub for other RipCurrent devices, but this does not change the fact that it’s also a capable router, equipped with high-end features, like Beamforming and Band Steering. It lacks the MU-MIMO feature that we keep on seeing with almost all the newly released routers, but it is a technology that doesn’t really serve a purpose right now, simply because there aren’t enough MU-MIMO devices on the market to justify the extra investment.

But, with the Beamforming technology, you get your signal to focus exactly at your connected wireless clients (not scattered everywhere) and the Band Steering has the role to push the connected devices from a band to the other in order to maintain a stable network and avoid congestion (I have seen a similar technology applied to some of the tri-band routers, like the Asus RT-AC3200, where clients were moved between three separate networks). Surely, the Band Steering feature requires that all the parameters to match on both bands (identical SSIDs, security types and settings).

Now, in order to test the wireless performance of the SBR-AC1900P, I paired it with another SBR-AC1900P in bridged mode. So, using the 5GHz radio band (and the 802.11ac standard), the router managed to deliver up to 442 Mbps at close range (the devices were close to each other at no more than 5 feet). After increasing the distance to 15 feet, the speed decreased to 337 Mbps and at 35 feet, I measured a maximum speed of 194 Mbps.

After switching to the 2.4GHz radio band (and, implicitly to the 802.11n standard), the SBR-AC1900P delivered a maximum of 110 Mbps at 5 feet. The speed took a slight decrease to 88 Mbps at a distance of 15 feet and lastly, at 35 feet, the speed went down to 64Mbps.
In order to test the storage performance of the SBR-AC1900P, I took a 1Gb folder containing miscellaneous media files (videos, photos, documents) and I tested the writing and reading speed. While nowhere near the impressive speed performance of the Linksys WRT1900ACS, the SBR-AC1900P did really well, featuring a reading speed of 44MBps and a writing speed of 26MBps.

Setup
The SURFboard SBR-AC1900P allows you to connect a device using one of the three possibilities: by Ethernet, Wireless or G.hn. Connecting a device using the Ethernet way is very simple: the router provides four LAN ports and you have to use Ethernet cables (use CAT5e or CAT6 for Gigabit Ethernet) in order to join the Local Area Network (if you use a switch, you can add a lot more devices: see a list of the best Ethernet switches). The wireless method allows devices that have a wireless adapter to join your network (using either the 2.4 or 5GHz radio band). While all wireless routers have these two options by default, the SBR-AC1900P also let’s you connect devices using the power lines in your home.

The problem is that you may feel a bit constrained considering that the number of devices that have this technology implemented is fairly low (you could go with the SURFboard RipCurrent Wi-Fi HotSpots and Network Extenders). Also, using the powerline technology has some shortcomings: it is ideal that all the devices to be on the same circuit for the best performance, take into account that the bigger the distance, the weaker the signal strength and you can’t use surge protectors. Obviously, the ideal way is to combine these three methods and create a mixed network that will cover every corner of your home and eliminate interferences.

It is important to know that if you already have some powerline adapters from the alternative technology (the HomePlug AV or AV2), it will coexist with devices using the G.hn technology, but, since there is no compatibility, there won’t be any communication between them. You should also know that the RipCurrent networks can support a maximum of 16 unique devices (including the router).

Now, in order to access the management interface, you will have to connect the router to a computer, open a browser and go to https://mysurfboard.local. Here, you’ll be prompted to enter the user name and password (admin and password). Afterwards, you can click the Launch Quick Start Wizard tab which will start the initial configuration (here, you can disable the Band Steering option, create a SSID and a WiFi Security Key, and change the default user name and password). After you finish the wizard, you can register your SBR-AC1900p router. Form here on, you get access to the main interface to further configure your router.

The Wireless option allows you to configure the 802.11 Radio, the Primary Network, the Guest Network Settings, the Access Control, the Quality of Service, Media and Advanced. The Firewall gives you the Protection Level, Parental Control and Local Log. Lastly, the Help tab gives you access to Overview and About.

Conclusion
Arris definitely made an interesting attempt to further the development of the powerline technology and while I don’t complain that they haven’t focused on the HomePlug technology, you won’t really find many G.hn devices devices on the market (the Comtrend PG-9172 being the main representative), so you would be constrained to use Arris RipCurrent devices to take advantage of this technology (and let’s face it, the SBR-AC1900P is a good router, but the powerline advantage makes it more desirable than other devices).

Surely, this is a clever way to promote their line of products, but I also appreciate diversity and it would be even more interesting to see both the HomePlug and G.hn working together (since there is a mess of standards and the emerging IoT market is in a chaotic state right now), but, do you really need the SBR-AC1900P in your home? Sure, the router is nicely built, the wireless performance is on par with the other high-end AC1900 routers, the interface is nice and easy to navigate and you get a cool technology that can help you further expand your network using the already installed power cables. Sure, you will have to settle with the G.hn technology, but its it really a bad thing? 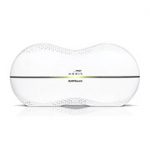