The AiMesh compatibility is obviously present since Asus would not miss the chance to add another router to its large list of compatible devices for creating a mesh network and this pretty much covers the highlighted features of this router. Asus may have released the ‘WiFi 6 versions’ of multiple routers from the previous generation, such as the RT-AX68U or the RT-AX86U, but both the features and their implementations have stayed very much the same and there isn’t such a substantial difference between the RT-AX86U and the RT-AX88U as it was between the RT-AC86U and the RT-AC88U. But, the wireless tests may prove me wrong, so let’s check out how the RT-AX88U fared so far

The testing procedure is the same as with the other routers: I used two computers, one as the server (will be connected directly to the router with an Ethernet cable) and the other is the client, so it will connect to the WiFi network. 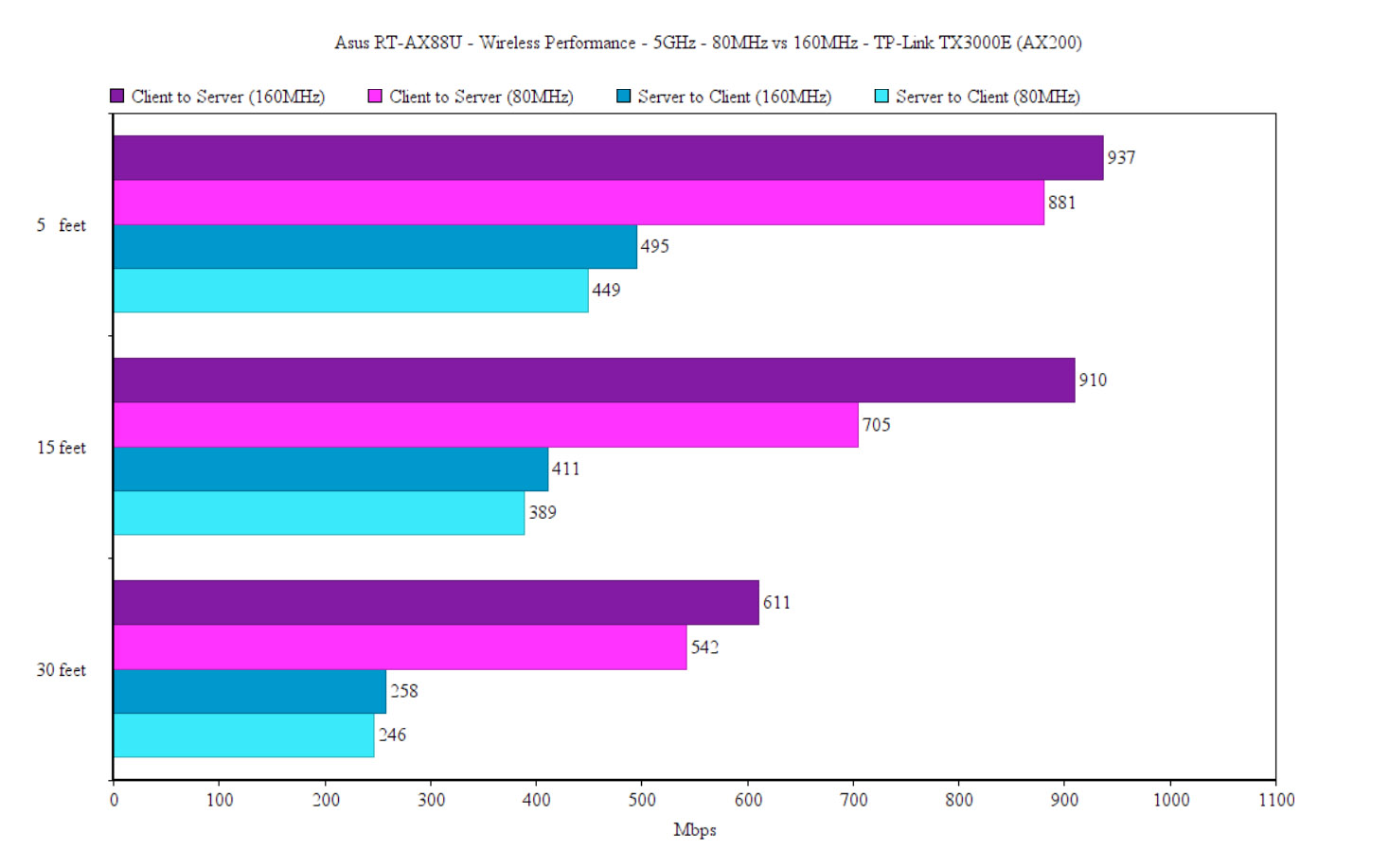 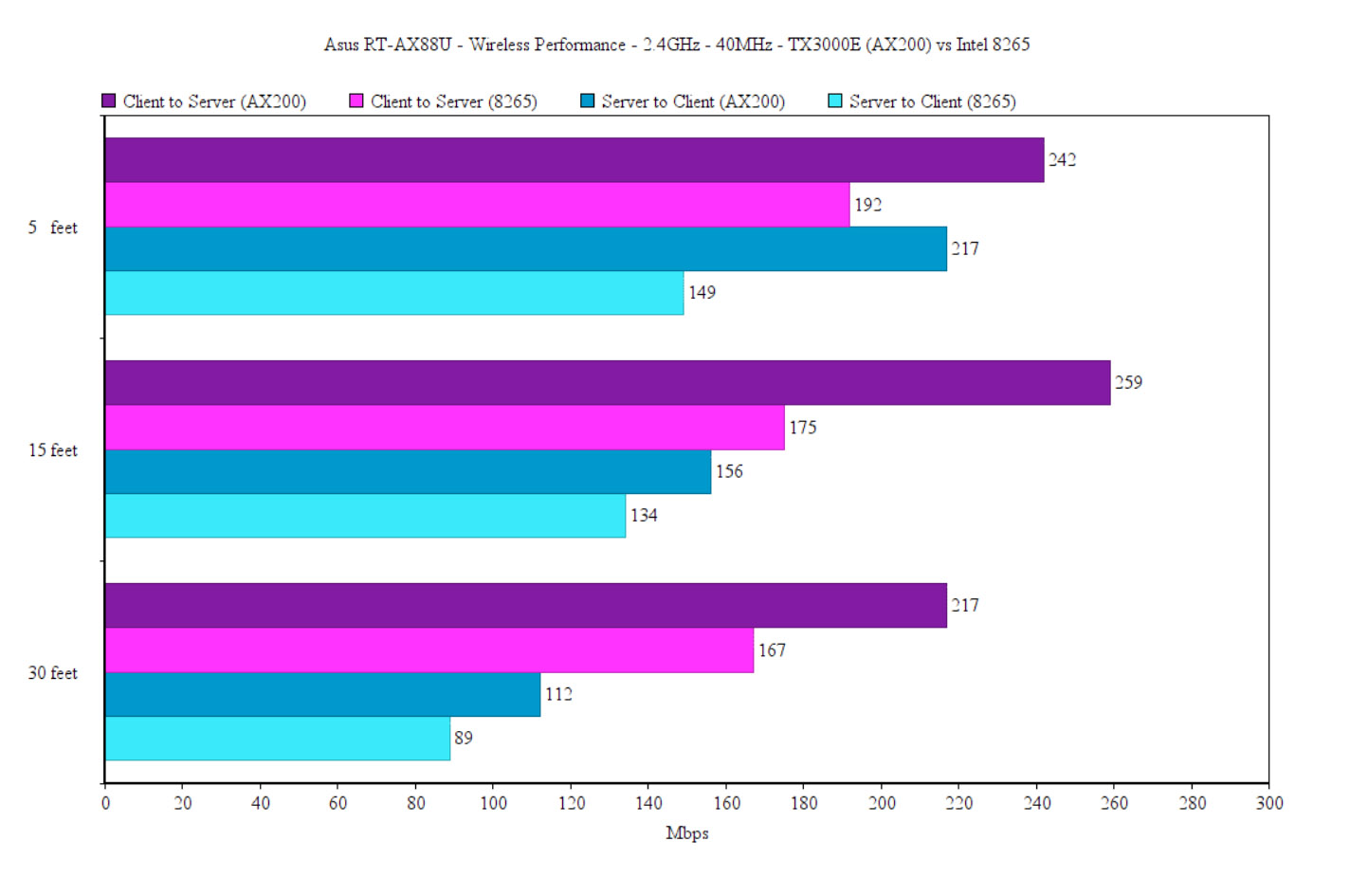 The WiFi 6 standard is far from being widely adopted, so I had to test the RT-AX88U with a couple of WiFi 5 clients, a computer equipped with the PCE-AC88 WiFi adapter (PCIe) and a laptop that is equipped with an Intel 8265 (integrated card). Unfortunately, the issues that plagued the RT-AX82U and the RT-AX58U (as well as the RAX40 and the AX50) are still very much present here as well, to a certain degree. Downstream, things were pretty much uneventful and I saw a performance only a bit below the AX200, but upstream, it’s a complete mess: it fluctuates like crazy and the best average that I got at 5 feet on the 5GHz network at 160MHz was 427Mbps. The client device equipped with the Intel 8265 is, as always, very stable (the problems seem to be related to the PCIe cards only). 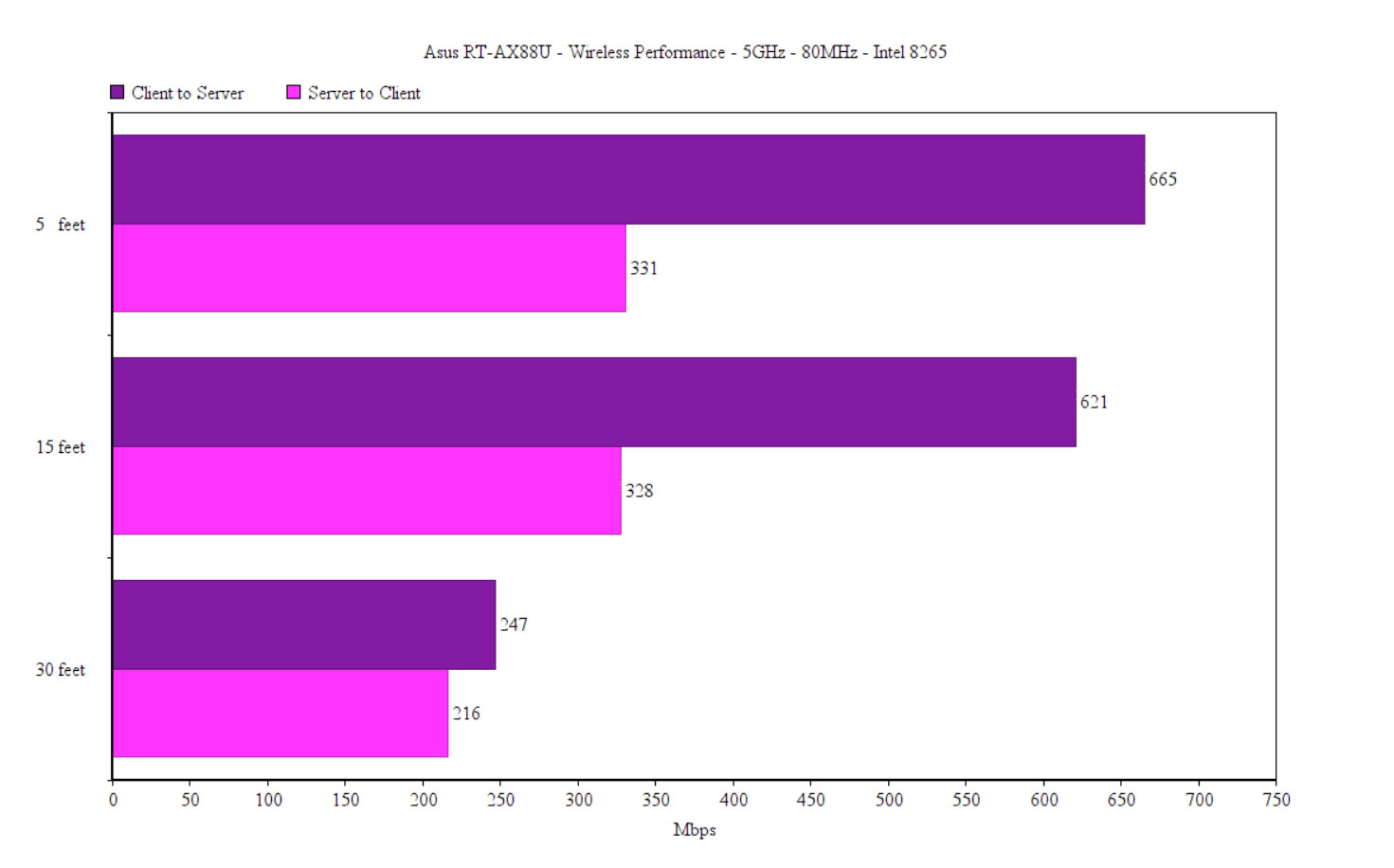 If you have ever installed another Asus router, know that all of them follow the same concept. You can either use the mobile app or the web-based interface, but considering that most won’t bother with the latter, I chose the former. I had a few other router installed, so I had to tap on the Plus sign and select ‘Set up a new router’. Afterwards, I selected the correct group (Asus Wireless router) and the app searched for the available Asus SSIDs in the vicinity. After connecting to the new router, I was ready to run the installation wizard which guided me to set up the Internet connection (PPPoE, so I had to enter the ISP username and password), to configure the SSID and password (you can split the networks) and to create an admin username and password. 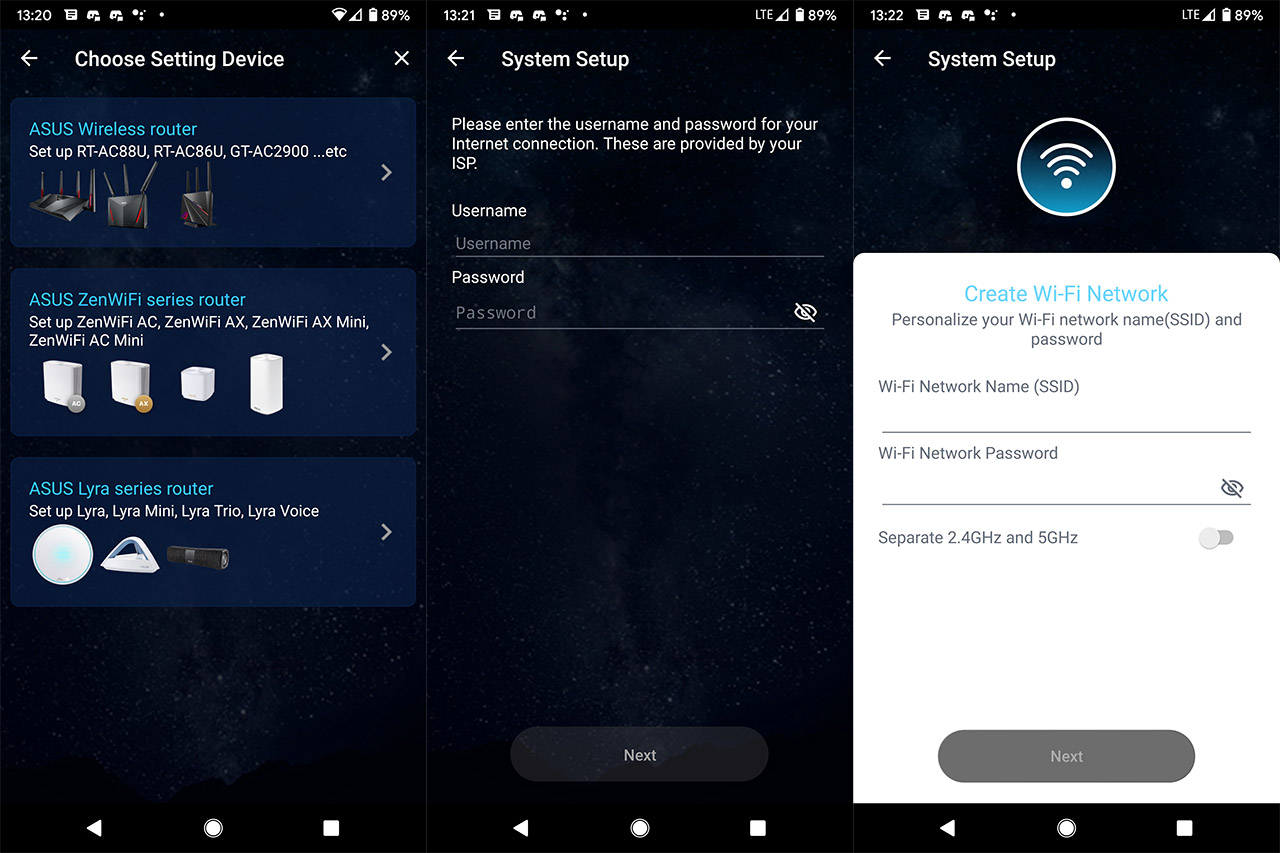 The user interface is the same as with the other AX Asus routers, so expect the animated circle in the middle with various info inside it (you can swipe to see the Real-time traffic, the SSIDs and more), while underneath it, you get the option to check the AiMesh network (if you have created one) and the Mobile Game Mode.

I know that the lack of red accents may have fooled you, but indeed, the Asus RT-AX88U is a gaming router and the Mobile Game Mode is a glorified QoS option which, when enabled, it will set the device you’re using to the highest priority, allowing you to play your mobile games as smooth as possible. Yes, I know that mobile games are rarely that heavy on the bandwidth, but with the new Cloud gaming platforms (Stadia, GeForce Now), things have changed quite a bit. If you move to the Devices section, you get a list of all connected clients (as well as the AiMesh nodes, if it applies) and tapping on any device will show more info, as well as give you the possibility to bind it to a specific node, set a higher priority or limit the bandwidth. There’s also the Family section (Parental Controls), where you can select between pre-made profiles, choose the devices that you want to apply the profile, create a scheduled access to the Internet and choose between various types of content. 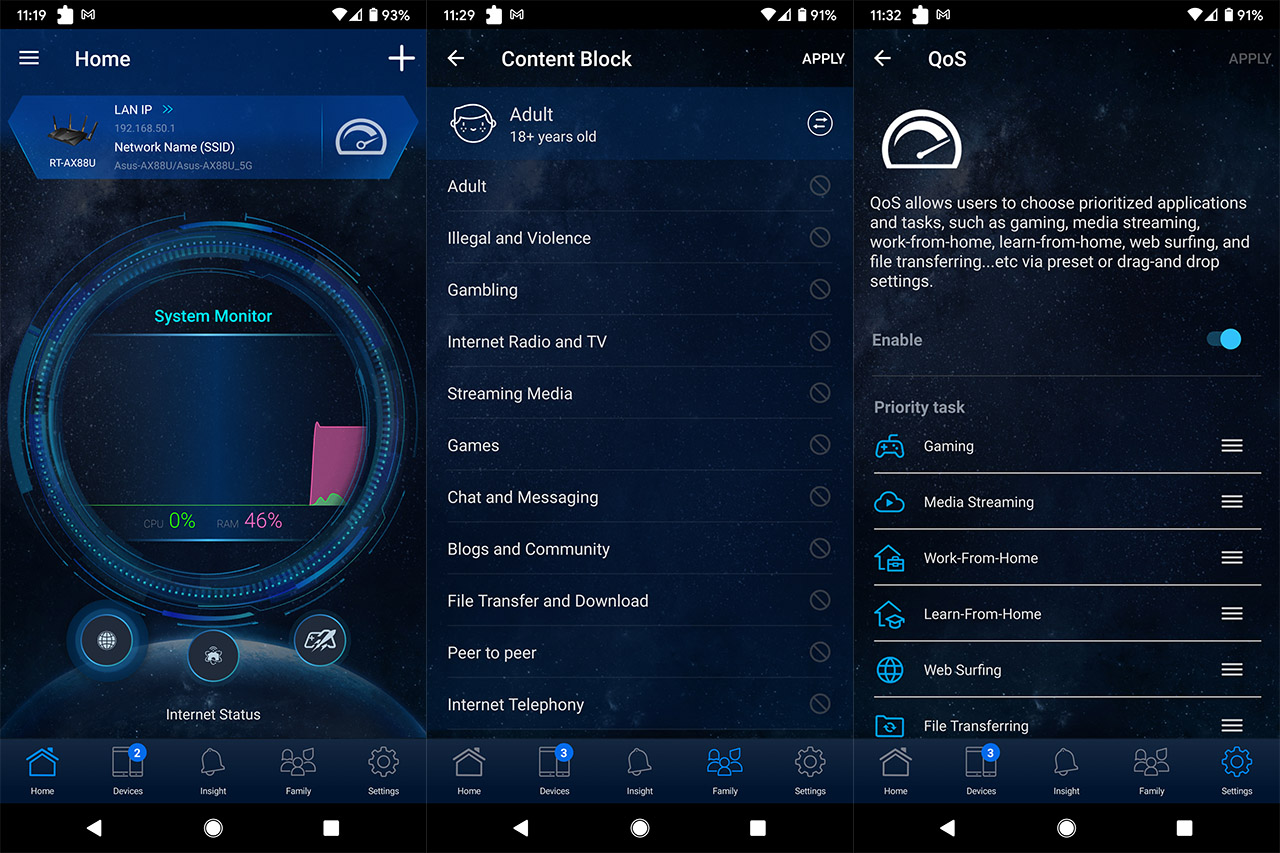 Under Settings, you can enable the AiProtection which includes an entire suite of options, but be aware that the app doesn’t go more in-depth than that, so you will have to use the web-based interface to better control its behavior.

The Gaming option includes the Open NAT feature (Port Forwarding), as well as QoS (you can choose which type of application will have the highest priority) and VPN Clients which will persuade you to go to the web GUI, so let’s check it out.

To access it, enter the IP address of the router (by default, it’s 192.168.50.1 or enter http://router.asus.com/) and then you’ll be greeted by lots of options divided into two section, General and Advanced Settings. 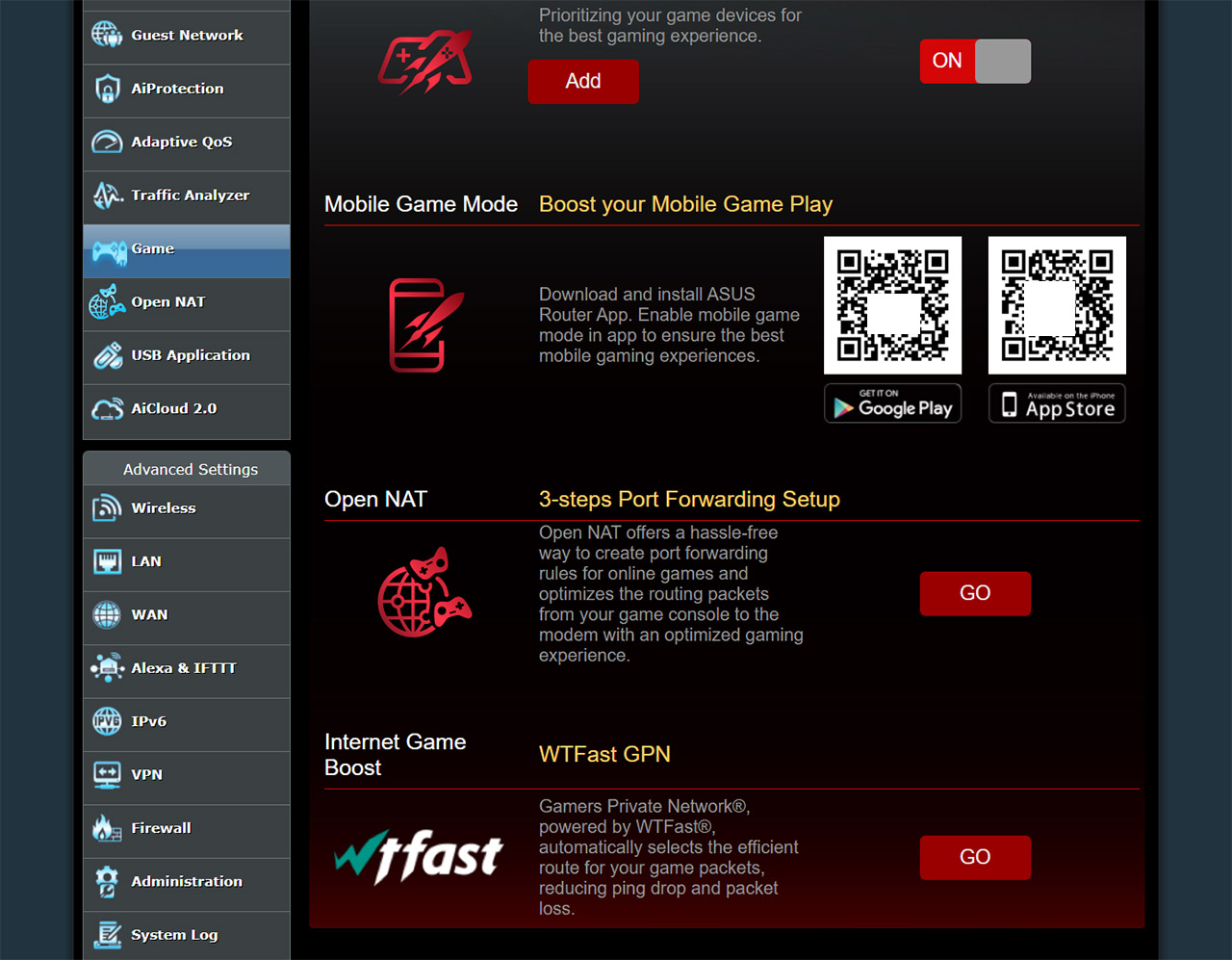 Under General, most of the settings are identical to what you get in the app, but there is more control in the AiProtection (includes enabling the malicious Sites Blocking, the Two Way IPS and the Infected Device Prevention and Blocking) and, if you’re curious about what Trend Micro collects from your router, check out this small analysis. The QoS includes both the Adaptive Qos and the Traditional QoS, while the Game section, besides including the Mobile Game Mode and the Gear Accelerator (gives your current device the highest priority), it also offers the WTFast GPN which apparently routes the traffic through a private server to reduce the ping drop and packet loss (be careful that some online games may restrict it).

The Open NAT is better fledged in the web software, allowing the user to create automatic forwarding rules for some specific games (there’s a list available). The Wireless section offers far more options, especially the Professional area, the WAN section supports Dual WAN (port aggregation) and the VPN section includes PPTP, OpenVPN and IPSec VPN. I have to mention that the RT-AX88U does support the Instant Guard – it’s an app that easily creates an IPSec VPN connection from outside your local network (you can read more about it here).

While on my crusade to buy the entire Asus AX line (I’ll take your entire stock!), it was inevitable that I would test the RT-AX88U and it’s a fine device, one of the most powerful Gigabit router that Asus has released so far. But, while I know that some features have been gradually enabled, there is only one reason to consider it over the RT-AX86U and that’s the additional four Gigabit LAN ports. Everything else is either identical or only slightly better (or worse), so it does feel like the delimitation line between models has gotten a lot thinner with the WiFi 6 routers. At the same time, you do get an excellent wireless performance on both WiFi 6 and WiFi 5 clients (just stay away from PCIe WiFi cards from Asus), the software is great (there is support from Merlin), so, if you have at least a few powerful WiFi 6 devices, the necessity for more than 4 LAN ports and a hefty budget, the RT-AX88U is a solid option. 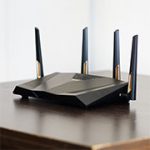