Still, I will retest the ECW230 soon to make sure that the new features truly don’t impact on the wireless performance. With that out of the way, let’s check out the wireless performance using the Intel 8265 client device. I saw an average of 444Mbps at 5 feet and 84.2Mbps at 45 feet upstream; downstream, the throughput was 414Mbps near the EnGenius ECW230S and 67.9Mbps at 45 feet.

The signal drops almost completely around the same point as with the AX200 client device (about 75 feet, where the attenuation was 86dB). Lastly, I checked the wireless performance with the Pixel 2 XL and it wasn’t that different than with the Intel 8265 client device, for the most part. At 5 feet, I measured an average of 462Mbps upstream and 336Mbps downstream. Despite the very similar signal strength to the Intel 8265 device at 45 feet, I only saw 78.4Mbps up and 33.5Mbps downstream. Also, no chance to reach 75 feet, the signal dropped completely at that point.

The differences in the throughput between the ECW230 and the ECW230S remain on the 2.4GHz radio as well – again, not due to the devices themselves. So, using the AX200 client device (40MHz), I managed to see an average of 302Mbps at 5 feet (upstream), which is excellent and the throughput remains solid even at 45 feet, offering an average of 131Mbps (-66dB, so the signal is quite strong).

Even at 75feet, the attenuation remained underneath 80dB and the speed was 30.2Mbps up and 11.8Mbps downstream. Moving to the WiFi 5 client devices, the Intel 8265 had a much better performance, remaining very stable up to 30 feet, but the speed did drop a bit at 45 feet and down to barely usable at 70+feet.

And that’s both upstream and downstream. The Pixel 2 XL had more trouble keeping a decent connection after 40 feet and after 45 feet, it barely managed to connect to the access point (the signal was cut by at least 80dB). This means that the EnGenius ECW230S and the ECW230 will work really well with WiFi 6 client devices on the 2.4GHz due to the OFDMA support, but the WiFi 5 client devices will not perform better than they would with a WiFi 5 access point.

The access point from the ECW series are built around the Cloud management platform, so there is very little control in case you decide to use them in stand-alone mode. To access the interface, power up the EnGenius ECW230S and then check what IP address it received from the router. Enter that IP address in the URL of any browser, insert admin/admin as the username/password and then you should be able to see the available options.

There are two sections, Device Status and Local Setting, the former showing some general info about the device and the latter allowing some minimal customization (IPv4/6 settings, VLAN, web proxy and the possibility to upgrade the firmware).

As you can see, it’s pretty much the same as with the ECW230, so let’s move on to the Cloud adoption. The process is the same, you add it to the Inventory and then pair it to the Network that you want. Then, the EnGenius ECW230S will receive the global settings (if you set any), therefore start using the pre-customized SSIDs.

You still get the option to personalize these options for this access point only. Overall, it’s the same experience as with the ECW230, so you can read more about it in that article. But there are a few new features that we have explored with the ECW220S, so let’s see them in action on the ECW230S as well. Be aware that some of these options are limited under the basic license, so to fully use them, it’s a good idea to upgrade the plan.

I have discussed these new features when I tested the ECW220S, so know that the experience is essentially the same. You get a new Diag icon next to your access point (or a large Diag icon when you check the EnGenius ECW230S individually) which, when accessed, it will take you to a separate section of the Cloud platform and it will display various info.

The first part is the Network Activities where you can perform a scan for the channel utilization in your area, as to avoid interference, especially with the 2.4GHz radio. Then, you can view the live Activity meters, check the Internet Connectivity (which automatically pings some default websites) or to run a Traceroute towards a specific domain. The next section is called Spectrum and here, the developers created a very interesting animated graph that shows you in real time whether the EnGenius ECW230S is impacted by interference, the channels where it occurs and the attenuation (dBm).

I admit I haven’t yet seen such a tool and it’s very cool to see it in action, since it’s useful to detect any jamming attempts. The last section is called Live Clients and here you get to see when a client device connects or leaves your network.

This is something that seemingly most routers and access points offer, but the differentiating element is that it’s actually live up to the second when it’s connected. This way, it’s far easier for system admins to understand what happened in case the client device under-performs.
Note: Be aware that using the Basic license, you only get one minute at a time to access the Diag section.

The AirGuard section can be found under Manage and at the moment, it is built to improve the security of the networks via access points only. I suppose a security firewall could take some of the load, but the EnGenius ECW230S does use the extra radios to provide some unique features.

And, under AirGuard, you can set specific rules for the Rogue AP detection (both Blocklist and Whitelist), but as I anticipated, I got nothing under the Rogue SSIDs, which is a good thing. You can check Other SSIDs to get an idea on what devices surround you, as well as if the EnGenius ECW230S detected any Evil Twins attacks, Malicious Attacks and even RF Jamming. This last feature is unique for a networking device at this price range and it let’s you know if there is a malicious actor attempting to interfere with your wireless network.

I admit I was skeptical of the ECW220S when I tested it since I wasn’t sure if there was really a need for a new iteration of the previous gen with seemingly very little differences in terms of hardware. But, I was proven wrong and just like the ECW220S, the EnGenius ECW230S does indeed take the network security to another level. The wireless performance is good, the Cloud platform experience remains intuitive and the improvements towards making things far easier for sys admins can be worth the extra dollars.

And the point was to help admins solve most network problems remotely, without needing to go to the site as often, thus cutting that extra cost. Would I upgrade from an ECW230? No, because you do get almost all of the security features anyway, but if you have clients with dense networks and wish to upgrade them to the newer WiFi standards, do give the EnGenius ECW230S (and even the ECW220S) a chance. 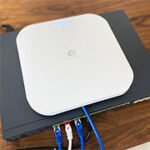