The TP-Link EAP660 HD was created to showcase TP-Link’s ability to implement some of the newer technologies that are associated to the WiFi 6 standard and yes, at the moment, this is the best WiFi 6 access point offered by the Chinese manufacturer.

TP-Link has been trying to make its presence more known in the SMB and enterprise market for years and perhaps the WiFi 6 equipment in addition to the Omada SDN may give the push they needed. The fact that the TP-Link EAP660HD has the same chipset as the EnGenius ECW230 and the Zyxel WAX650S, while keeping the price tag far lower is also promising. But there are more factors in play than just the hardware alone. I have had a glimpse at the Omada SND when I tested the TL-SG2210P Ethernet switch and it’s a more mature software than it was years ago. 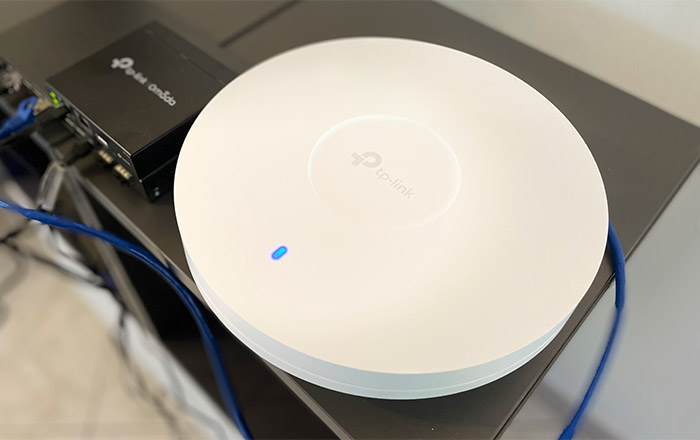 The similarities with the UniFi have also not gone unnoticed and they may be an advantage considering that Ubiquiti has been behaving very strange these last few years. Still, unlike the consumer market that’s way more forgiving, the companies need a stable network and a proper controller to keep everything secure and properly running at all times. And that’s perhaps one of the disadvantages of the Omada SDN because it’s still a green platform and hasn’t been proven in the long run, yet. But, then again, the TP-Link EAP660HD is inexpensive enough to be worth a second glance and, considering that it does have most of the expected features (OFDMA, a 2.5GbE port, 1024QAM and MU-MIMO), let’s put it to the test.

One of the few manufacturers that was able to design a truly compact higher-end WiFi 6 access point is EnGenius (with its ECW230 and the ECW220), while Zyxel and it seems that TP-Link as well, have relies on far larger cases for their devices. They’re still covered by a white matte finish, so they’ll do well on the ceiling and the circular body of the TP-Link EAP660HD is actually less industrial looking than other wireless access points.

The case is entirely made of plastic though, so it did needs quite a few openings to let the heat flow outwards (while an alloy body will absorb it faster and perhaps better). Then again, I opened the case and I saw that there is a fair bit of room to allow a proper internal airflow. The case does get warm near the middle of the case, both upwards and downwards, but the EAP660HD did not overheat. 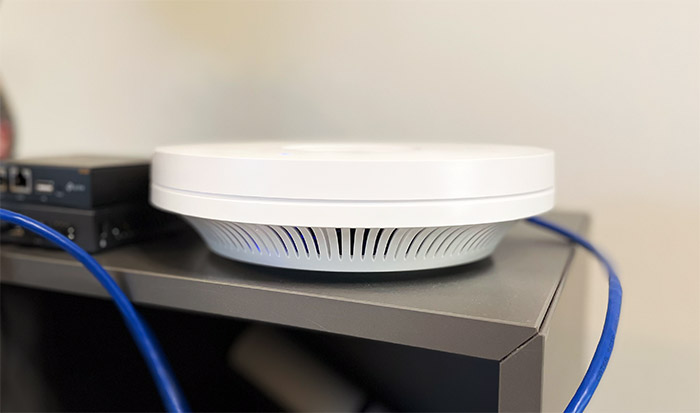 The access point was not deigned to sit on your desk because, firstly, it’s huge (it measures 9.6 x 9.6 x 2.5 inches or 24.3 x 24.3 x 6.4 cm) and will take lots of space and secondly, because there are no silicone feet on the bottom. Instead, there is an area where you can rotate the mounting bracket – there are screws in the package to make the wall or ceiling mounting easier. The top of the EAP660HD is very simple and it has only a recessed circular area for the logo (this area is glossy white) and, while Ubiquiti likes to add rings of light to show the status of its APs (as seen on the nanoHD and the UAP-AC-PRO), TP-Link preferred to use a single small LED.

I usually prefer a proper array of LEDs, but for a device that’s going to sit on the ceiling, one LED can be enough. That being said, if the LED is on, then everything is working properly and it will flash either when the device is initializing or when it’s upgrading the firmware. If there is an error, then the LED will turn off, instead of becoming red or flashing red, so I suppose it’s not as intuitive as I would have hoped. The ports area is on the bottom within a dedicated carved-in section and you’ll be able to see a recessed Reset button (press and hold it for a few seconds to return the AP to its factory settings), a 12V Power port and a single 2.5GbE Ethernet LAN port. There is a power cord in the package, so you don’t need to use a PoE injector or PoE switch, if you don’t have to. 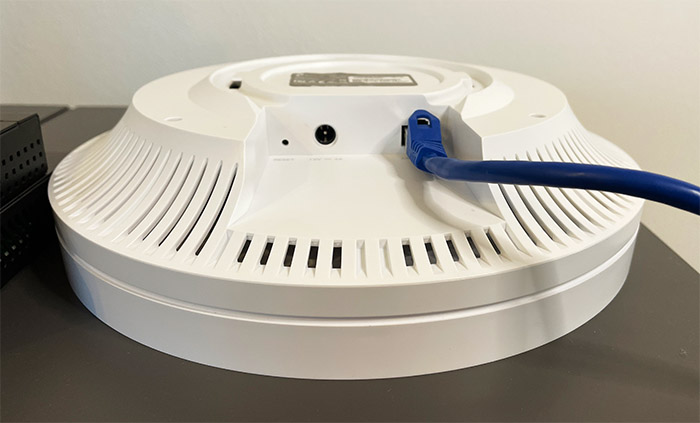 Furthermore, if you do decide to use a PoE switch, then the TP-Link EAP660HD doesn’t require that much power (only up to 21.5 W), so you don’t need anything that fancy, but a multi-Gigabit Ethernet switch is still a preferred option. And that’s because of the 2.5GbE port (it’s a shame not to try and take advantage of it, but we’ll see if the WiFi will actually allow us to go above 1Gbps).

The tear-down process for the TP-Link EAP660 HD is fairly simple, but you do need to be aware that opening up the case will most likely void the warranty. If that’s fine with you, then you need to remove the four screws from the bottom side and it seems that TP-Link also decided to include one more screw underneath the label that’s very difficult to remove without leaving severe marks. I guess it’s their own way of adding a warranty seal, like Asus does. In any case, after removing the five screws, you need a prying tool and carefully detach the top cover. This way, you’ll be able to see the PCB with a large metallic heatsink and a curious antenna design at the top. 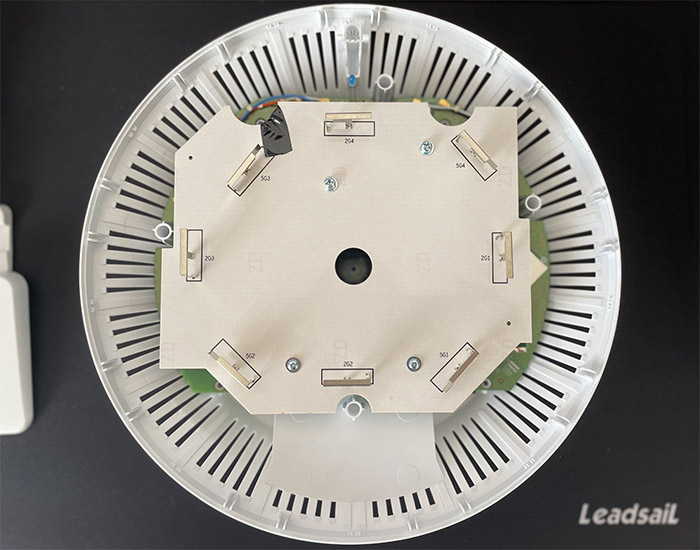 Note: The TP-Link EAP660 HD is an AX3600-class wireless access point, which means that the theoretical maximum data transfer rate on the 2.4GHz band is 1,148Mbps, while on the 5GHz, it’s 2,402Mbps – don’t get your hopes up, because you’re not going to see this performance outside lab conditions.

Since the TP-Link EAP660 HD is a part of the WiFi 6 access points, it does support the OFDMA technology (Orthogonal Frequency-Division Multiple Access) which means that the AP is allocating multiple sub-carriers (RUs) of the bandwidth to multiple users which should translate in a far more efficient performance on both the 5GHz and the 2.4GHz band. And yes, the TP-Link EAP660HD does support ODFMA ul and dl on both bands. Besides this now mandatory technology, there’s the expected support for MU-MIMO which has the role of serving multiple clients at the same time. It’s a nice feature to have with compatible clients, although it’s not going to improve the performance in a significant manner.

And then, there’s the BeamForming which focuses the signal towards the compatible client devices, reducing the impact of interference and improving the available bandwidth. But, since most users will want multiple of these devices to work together and form a single network, there is the expected support for the mesh technology.
And the more interesting aspect is the roaming performance. To be more specific, if you have client devices that support the 802.11k/v standard, then you can rely on the fast roaming technique to move from one node to the other, mimicking the feel of a single network (the handshake is made prior to the roaming process itself).

What I wanted to mention is that it seems that the roaming with the aforementioned type of client devices is faster when using the Omada controller, such as the OC200 than simply using the access points without a controller (which is very much possible) – this topic discusses it more in detail. I don’t know if I still have to mention it, but the mesh technology has the ability to self heal in case a node (AP) goes offline and it does automatically optimize itself depending on the number of nodes, the number of clients, the signal strength and more. Before moving forward, I need to mention that the access point does not support 160MHz channel bandwidth, it’s only limited to 80MHz. 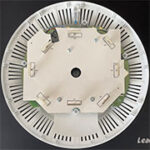