When you think about smartphones, the first few names that come to mind are the iPhone, Samsung, LG or probably Nokia. But this year a new flagship smartphone tries to make its way into the ‘big boys’ field and it goes by the name of Huawei P8 (yes, it’s a Chinese name and we also struggled with pronunciation).
Huawei is not really new in the smartphone market , as it is well known for its Ascend series that although featured good-looking phones, they weren’t really that impressive in any other aspect. Still, the P8 is a successor of the series even if the Ascend name is stripped off.

At first glance, the phone does seem to have great potential and the price tag is certainly attractive, but let’s have a closer look to see if the Huawei P8 is a worthy competitor to the Samsung Galaxy S6, iPhone 6, HTC One M9 or LG G4.
Note: In 2015, Huawei is the third biggest seller of smartphones in the world. 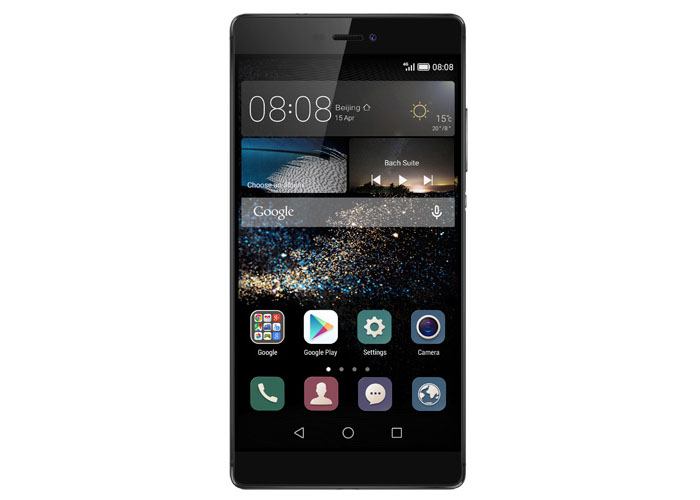 Design
Huawei P8 features an aluminium uni-body, with thin bezels, a completely flat black and with a subtle finish that further enhances a modern, clean look. We can clearly see that Huawei took inspiration from other flagship models when designing the P8, looking strikingly similar to the iPhone 6, in particular.
The metal case feels solid and quite sturdy, although it has one of the thinnest frames (it measures 5.63×2.78×0.3 inches) and is very light (it weighs 4.64 ounces). But does it bend?
Both the Galaxy S6 and iPhone 6 have had problems with bending, especially if the phone was kept in tight pockets. We did try to bend the P8 but it proved to be quite sturdy. Still, because it’s thinner than other flagship phones it still holds the risk of bending in certain conditions, so taking account of its potential fragility may prove useful.

The fact that the front and back are completely flat and because the phone is very thin doesn’t make the P8 the most comfortable to hold, though it does have a bit of grip, thanks to its subtle finish, but manoeuvring it may prove a bit difficult.
The front of the device is quite featureless, consisting only of the display, an earpiece speaker, a front-facing camera and the ambient light sensor.
On the back of the phone there is a plastic panel that runs from side to side along the top and holds the camera and the flash unit. This plastic band rather spoils the look, as it doesn’t look premium at all. 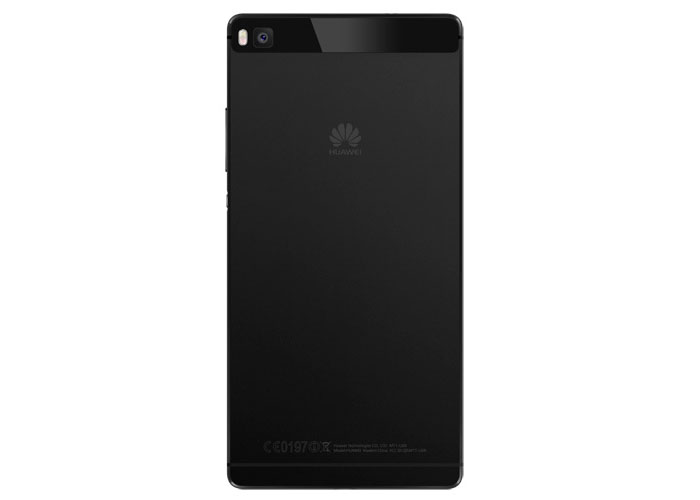 The volume controller is situated on the right and it’s fairly easy to find with the finger. Also on the right, bellow the volume controller rests the power/lock button and underneath it there are two trays: one for the nanoSIM and the other for a microSD card that also doubles as a second nanoSIM port.
On top of the phone there is the 3.5mm headphone jack and along the bottom of the P8 there are the microUSB port, microphone and the speaker.
The phone comes into four colour variants: Mystic Champagne, Titanium Grey, Prestige Gold, Carbon Black
Huawei P8 is cheaper than its metal competitors, it has a refined exterior (maybe too similar to iPhone 6?) and overall we liked its design.

Display
Huawei P8 has a 5.2in JDI IPS-NEO display with 1920x1080p resolution, 16 million colours, 424ppi pixel density and is protected by Gorilla Glass 3.
The display has wide viewing angles and its quite bright, reaching a maximum of 503 nits. Although it’s not the brightest, it does fare well in all light conditions.
Note: The P8 doesn’t have a home button.

Thanks to the IPS-NEO, everything looks clear, the contrast reaches amazing levels and the blacks are really deep (almost as an AMOLED). Furthermore, this display managed to reach almost complete coverage of the colour gamut making it one of the most accurate LCD displays we reviewed.
In the end, we enjoyed this display but it does have a few shortcomings. Although the images had plenty of detail and impressive vibrancy, there is a bit of oversaturation and if put under lower levels of brightness, the colours became slightly washed out.
But all of this don’t really undermine the Huawei’s display, it just shows that it isn’t perfect; the display is really great, on par with what you can find on HTC One M9 or iPhone 6. 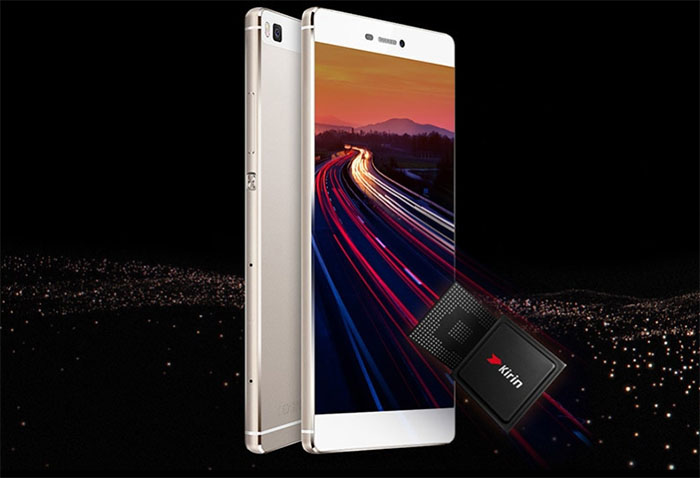 Performance
Huawei P8 sports it’s own 64-bit octa-core HiSilicon Kirin 930 chipset (that uses ARM’s big.LITTLE technology): it constantly switches between the faster 2GHz quad-core Cortex A53e and the slower 1GHz quad-core Cortex A53, based on low or high intensity tasks.
The chipset is backed by 3GB LPDDR3-1600 RAM, a Mali-T628 GPU, 16GB native memory (or 64GB) and a possible addition of up to 32GB through the microSD card.
The P8 is not really made for mobile gamers and comparing its performance with the Samsung Galaxy S6 or HTC One M9 it just doesn’t seem fair.
The phone will struggle with 3D games at their highest settings, web browsing can be a little jerky, especially when scrolling through heavy image loaded pages and overall the P8 is a mid-range performer.

Huawei is saying that efficiency is much more important than raw power. Some may agree, others may disagree, it all depends on what you need from a phone. But from our point of view, a flagship phone that wants to go against this year’s top smartphones needs to have a bit of raw power.
In terms of connectivity, Huawei P8 supports: Glonass, Bluetooth 4.1, NFC, GSM 850/900/1800/1900, UMTS B1/B2/B4/B5 and LTE B2/B4/B5/B12/B17.aGPS with .

Software
Huawei P8 features the EMUI 3.1, which is made on top of Android 5.0 Lollipop OS. The EMUI 3.1 is more stable than the previous EMUI, has some new API improvements, but on the surface looks very similar to the previous version.
But the similarities don’t stop at the Huawei series. If you’re familiar with the iPhone’s iOS, you will notice that the EMUI 3.1 is maybe too similar to the iOS 8.
The shape and styling of the icons is replicated, as well as the home screen which looks basically the same and even the pull-down gesture for the Spotlight Search along with the blurring.

There is no application drawer so all the apps and widgets are laid out on the launcher screen. Overall, the interface is customizable and quick, full of various unique features.
One of these features is the Knuckle Sense Technology that detects if you’re using the tip of the finger on the screen or your knuckle and performs different actions. For example, if you double tap the screen with your knuckle, the phone takes a screenshot.
The Voice Wake is another fun features. It allows you to set a predetermined phrase for the phone to recognize and then call out to let you know where it is (good for finding where you left it in your room). The problem is that it only works in close proximity.

Camera
Huawei P8 has a 13-megapixel rear camera with dual-LED flash, maximum of 4160x3120p and f/2.0 aperture. On front you get a 8-megapixel camera, perfect for selfies.
The Chinese Company claims that the P8 features the “best-in-class” optical image stabilisation (OIS), the first four-colour RGBW imaging sensor and a DSLR quality ISP (image signal processor).
All this should translate into improved brightness, less noise in dim conditions and more vivid pictures with natural colours. Also, the ISP further helps in low-light conditions and controls the camera’s Auto Mode (assesses the environment and adjusts the settings to give you the best shots).
The camera applications is, again, way too similar to the iOS Camera UI, with a similar round shutter key, the slide-sideways activated camera modes and the iOS filter with eight photo effects.

Some features worth mentioning are the Instant Shot that allows you to shoot a picture by double pressing the down volume key, while the phone is locked. Or the All Focus mode that allows you to change the focus point of already saved images and a really fun feature is the light painting mode designed to take long-exposure shots of moving light patterns and then, you can build the image in real-time on your screen for really cool shots and videos.
The HDR doesn’t have an auto mode, just like OnePlus Two, but it is a lot more subtle and it brings out more details, without undermining the quality of the image.

Overall, pictures are of high quality, with a high amount of detail (you have to zoom a lot to see pixels), but colours aren’t as vibrant as on the Samsung Galaxy S6, pictures were a bit overexposed in certain parts and there is noticeable noise in broad daylight (though it didn’t affect the clarity).
You can also film 1080p videos at 30fps.

Battery Life
The Huawei P8 has a non-removable 2680mAh battery that may not look too impressive at first glance. And it’s not. Huawei claims that it has focused more on efficiency than anywhere else. So the real work should be done by the efficient display, power saving chipset, the FullHD resolution and more.
So, while testing it on light to medium use, we managed to barely reach a day and if on heavy use, the phone lasted about 8 hours. All this is not good or bad, it is a reasonable battery life performance and with future updates maybe we will see the promised one day battery life on heavy use come to life.

Conclusion
Huawei did not cut any corners when it designed and created the P8, it features a great camera, premium looking design (that can be improved) and a great display, so overall it is a worthy competitor to the top flagships.
Still, there are some issues that need to be addressed with future updates or future models, like the performance, battery life and bit on the design.

But most important, there is a lot of potential for the Chinese Company, so instead of opting for an iPhone clone they should go for a new, fresh design.
We know it is quite hard to be unique in the smartphone world and maybe the Chinese customers wish for iPhone look-alike phones that cost less, but to really gather trust and a large fan-base (especially in the West) they should really focus more on uniqueness.#

Note: The Huawei P8’s may be a bit expensive, but there is a more affordable version called the Huawei P8 lite. 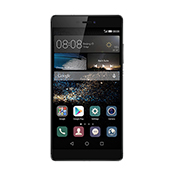