A year after Samsung introduced us to Galaxy S5, the Korean company tries to outmatch every other competitor with the new and improved Samsung Galaxy S6.

The Phone features a futuristic design, great performance, fantastic camera and overall, it promises to not disappoint even the most exigent customers.

The Design
For some time, the Samsung smart phones were heavily criticized because of the plastic material that felt a bit cheap, so Samsung learned from its mistakes and came up with a perfect fusion between glass and metal for the new Galaxy S6.
The design gives a premium vibe, with curvier corners, sleek silver edges and the camera is now protruding a bit out of the back. The dimensions are 143.4×70.5×6.8mm, being considerably closer to Galaxy 5 but being a bit lighter as it weights only 138g.
Unlike previous versions, the Galaxy 6 now has the microUSB at the bottom, along with the speaker and the headphone jack. On the ride sight we find the power button, while on the left we see the volume buttons.
To be able to achieve this look, Samsung had to make the Galaxy 6 non-waterproof and you can not take the battery out. But this is not a turn off at all, the new Galaxy 6 is very comfortable to hold and operate and, most definitely, when you will take the phone out of the pocket, its gorgeous design will attract the attention of all the people around you.

Display
Galaxy 6 features a 5.1in Quad HD Super AMOLED display with a 2560X1440 resolution and a density of 577 ppi. The high pixel density won’t be observed with the naked eye but let’s just say that HD videos will look great on this display.
The images are impeccably sharp, with true colours and improved brightness levels. Like the Galaxy 5, the user can adjust the colour behaviour with the help of the predefined modes: Basic, Photo, Cinema and Adaptive.
To conclude we say that Samsung Galaxy 6 has a fantastic display, so videos and photos will look stunning on the screen. 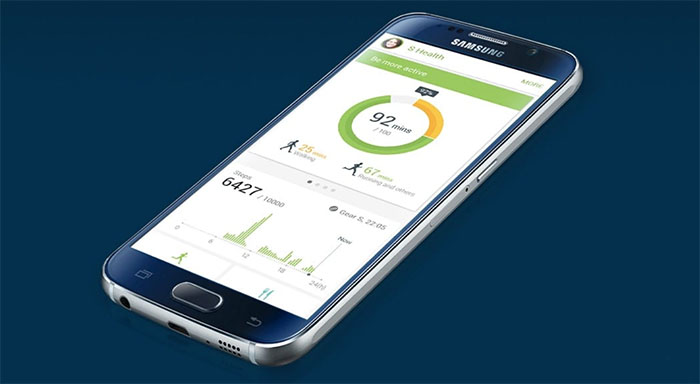 Performance
Though most recent smart phone manufacturers have opted for the Qualcomm Snapdragon processor, Samsung designed it’s own octa-core Exynos 7420 chipset that can compete with the latest phone processors.
The octa-core processor is divided into two quad-core chips, the first running at 2.1 GHz and the second at 1.5 GHz, paired with a 3GB RAM and an ARM Mali-T760 GPU.
Galaxy S6 scored the highest on most benchmarks and is most likely the fastest smart phone you can buy at the moment. This means that multitasking, playing games or running any other resource-heavy application will be handled smoothly and without delays or lags.

Camera
Galaxy S6 features a 5 megapixel front camera and a 16 megapixel rear camera with optical image stabilization and a bright f/1.9 aperture, that is capable of filming Full HD at 60 frames per second, 2K and 4K.
The f/1.9 aperture let’s you take impeccable photos when the lighting isn’t very good. The camera interface is pretty simple and intuitive where you can adjust colour effects, HDR, enable selective focus or helping you take some great macro shots.
The end result is a photo without observable noise, impressive sharpness of details, the colours were accurate even if the conditions were not the best and the saturation was toned to a perfect level.
All in all, the Galaxy S6 camera is the best you can find on a smart phone right now.

Software
Samsung Galaxy S6 is equipped with the Android 5.0.2 Lollipop OS that runs at its full 64-bit capacity along with the latest TouchWiz technology.
The fingerprint reader is much better than from the previous versions, the private mode makes a comeback, lots of apps can be downloaded from the Galaxy App Store, including lots of new themes and the Multi Window is now integrated in the app switcher.
Although TouchWiz experienced lags in other models and in previous versions of Samsung Galaxy, on Galaxy S6 ran without problems and we experienced no slow downs.
As for connectivity, we have the mandatory 4G LTE that reached download speeds of up to 300 Mbs and 50 Mbs and a dual-band WiFi a.b.g.n.ac along with DLNA support. This specs ensured a great stable connection and a good call quality.

Storage and Battery Life
Galaxy S6 comes with internal storage of 32 to 128 GB and unfortunately, without the possibility of inserting a microSD.
The battery equipped is a 2,550mAh that, surprisingly scored higher than average. On stand-by the battery endurance reached about 360 hours and about 10 hours of extensive browsing and gaming or watching videos.
But, if tested on normal use, the phone lasted for about 2 days.

Considering the fact that the new Samsung Galaxy S6 is a marvel of technology, having a outstanding design, great performance and a gorgeous screen that outmatches almost all other smartphones that are on the market right now, we can only conclude that this is the best android phone so far. 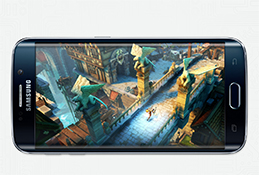