The live footage is still occupying half the screen with the bitrate on the left (averages at about 3,100kbps when at maximum image quality) and the quick action icons underneath it, but you do get an additional icon besides the Talk and Playback: Clip. And I have seen it on other Reolink cameras, but it’s the manufacturer’s way to put that digital zoom in action – it works really well, although not at the level of the mechanical zoom seen on the RLC-811A. It’s still going to be enough to see what’s going on on your property from a distance. The three icons from the top right are still there: there’s the Torch icon (tap it to enable or disable the spotlight), the Sound alarm icon (it will enable a loud horn to scare off any nearby intruder) and lastly, there’s the multi-camera view which you can use to see multiple paired cameras at the same time. 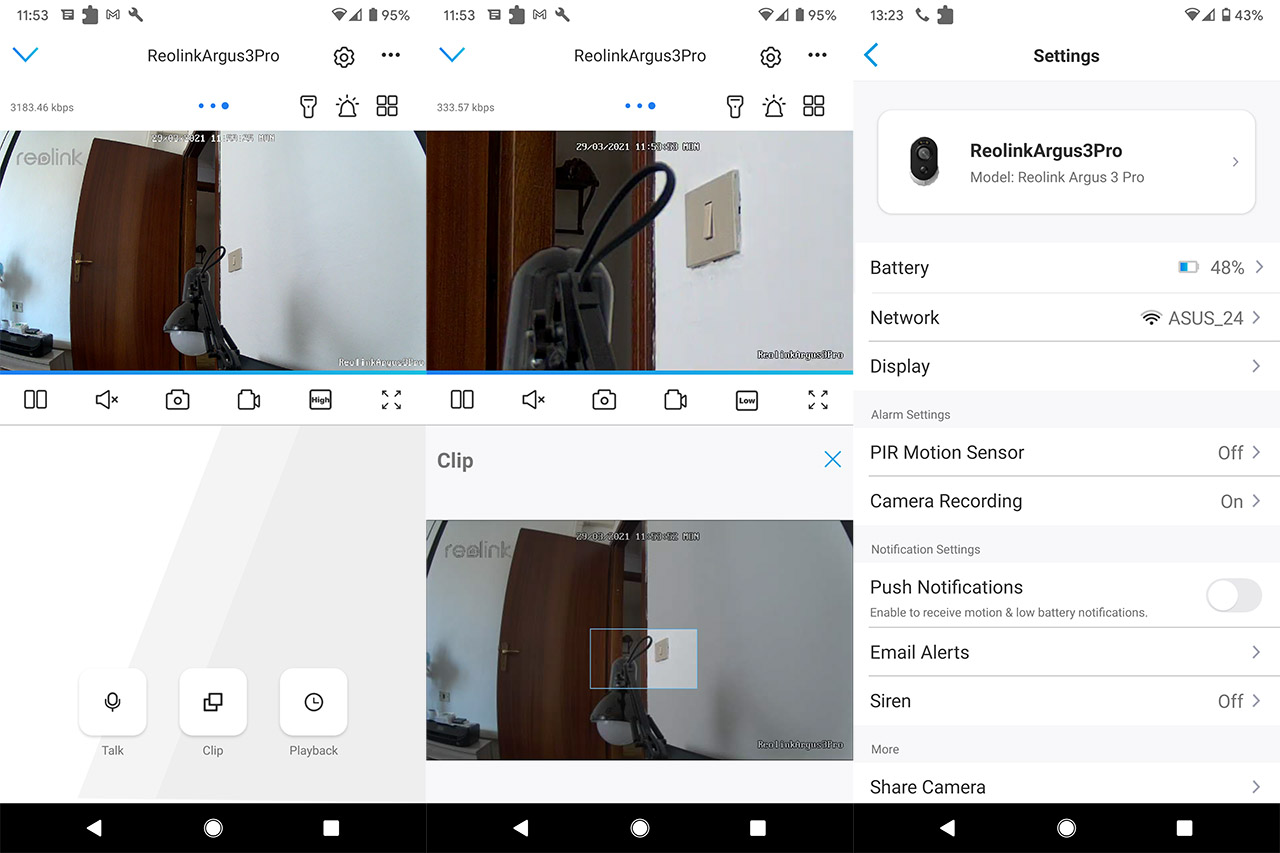 From the quick action icons (those underneath the live video), it’s worth mentioning the Image quality icon which allows you to select the Fluent mode (requires the least amount of bandwidth, but the image quality suffers), the Balanced (the middle quality) or the 4MP, which is the maximum available quality.

When I tested the Argus 3, I justified the use of a 2-megapixel sensor on the cost and battery life, but it seems that Reolink has managed to add a 4-megapixel sensor on the Argus 3 Pro (1/3″ CMOS), therefore supporting a resolution of up to 2560 x 1440p at 15fps, all that without budging the price tag (for now, anyways). The battery life problem has also been solved by upping it to 6,500mAh (from the 5,200mAh of the Argus 3). So, the Pro version of the camera doesn’t need to hold back and indeed it doesn’t. During the day, the image quality is very good, rich in details and little to no digital noise, but be aware that as with all other Reolink cameras, the footage is a bit contrast-y. And it’s not a bad thing considering that besides clearly seeing what’s going on, you also get a bit of eye candy. Just like the other cameras that I tested, I pointed the Argus 3 Pro at about 200 feet away and as you can see, the footage is excellent during the day. But, most cameras do perform well in the daylight, so how does the Argus 3 Pro fare during the night? The camera relies on two modes to provide a reliable night-vision: the traditional way using the IR LEDs delivering a black and white footage or by using the spotlight to color the night-time video. 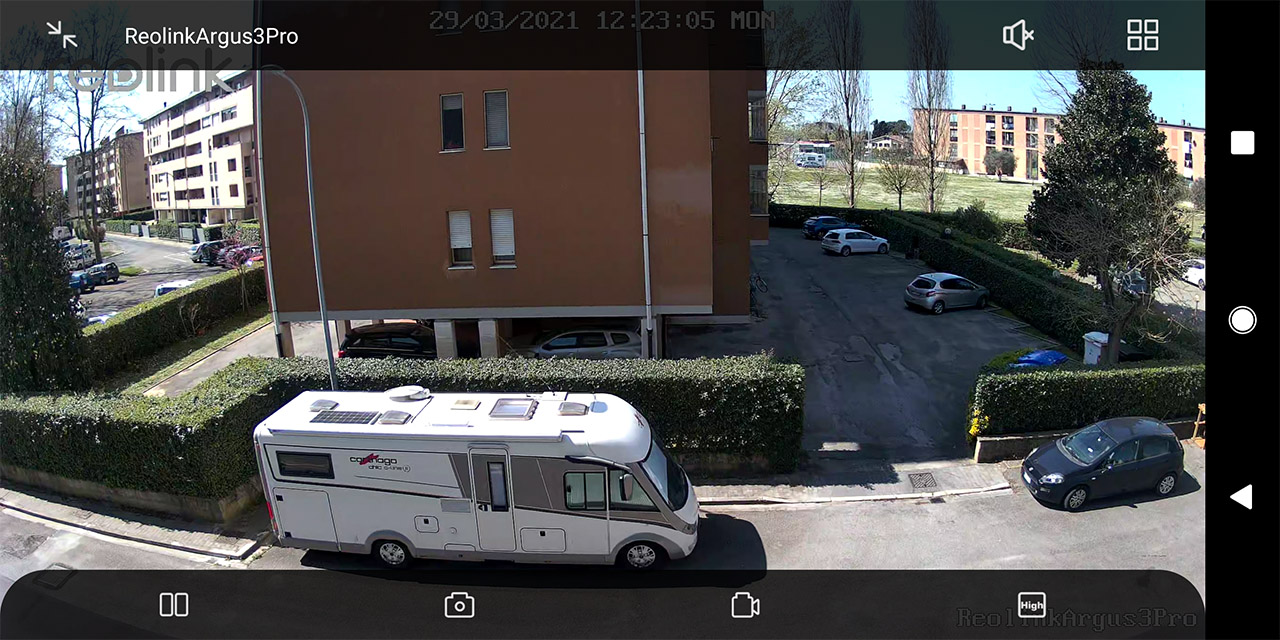 The black and white video is good, there is a healthy amount of detail, but if there are some light sources, the video losses a bit of saturation and becomes slightly washed out – it barely affects the image quality. At the same time, using the spotlight, you get a superior night-time video, with the details more clearly highlighted and it also seems that the light sources are handled a little bit better. 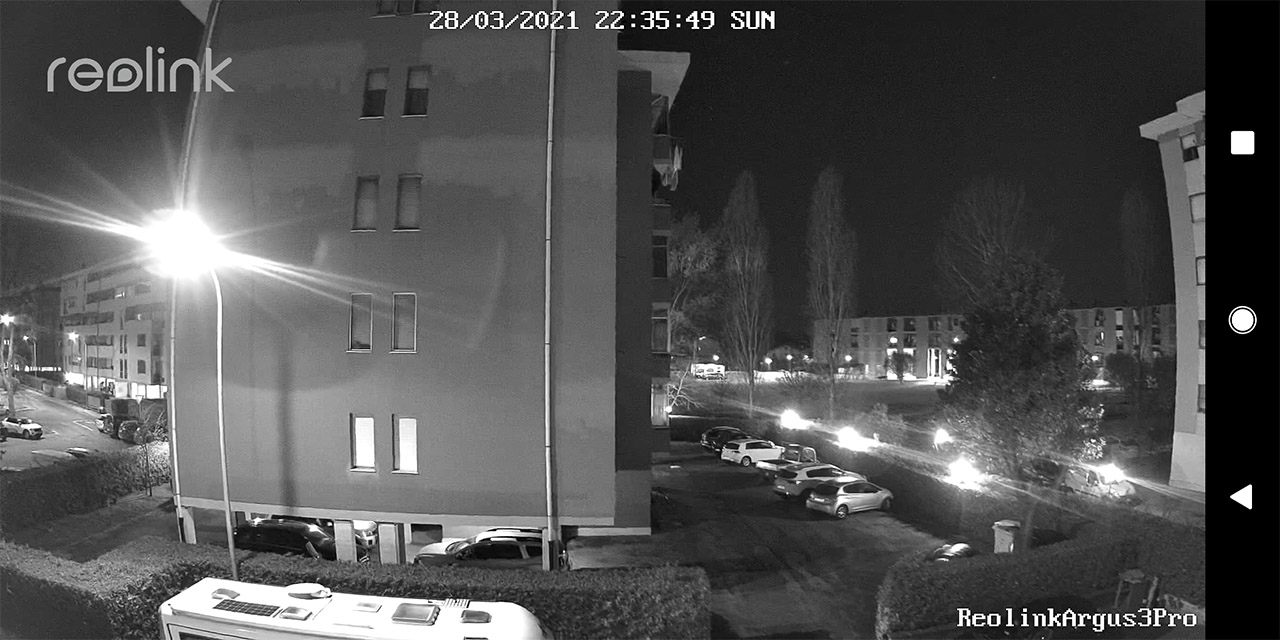 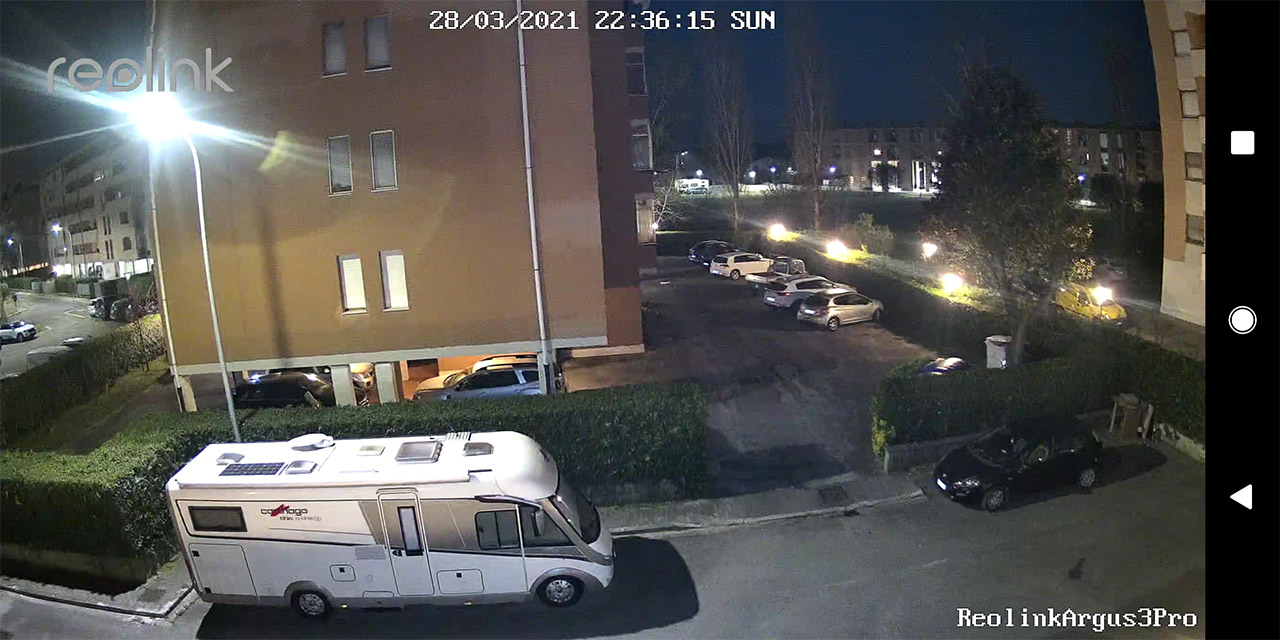 Overall, the 4-MP lens does a very good job, but the wireless cameras always have a bit of latency and the Argus 3 Pro also shows a slightly delayed footage. And, of course it is going to be very dependent on distance and on the video quality. I have set it to 4MP and near the router (about 12 feet), the latency was about 2 seconds regardless whether it was day or night time and, after increasing the distance to about 25 feet and a couple of walls in between the camera and the router, the latency became more noticeable going up to 3-3.5 seconds. After putting the image quality to Fluent, the lag dropped to 1 second near and 1.5 seconds at 25 feet. I also need to mention the field of view which is 122 degrees diagonal (2 degrees more than on the Argus 3) and it does help covering more ground.

The smart motion detection technology was first added to some PoE Reolink cameras and then I saw it on the RLC-511WA, a wireless 4K camera, so I knew that it will be implemented on the next Argus generation. Well, it seems that I was wrong and Reolink decided not to wait to include it with an entirely new generation, but to quickly add it on the new Argus 3 Pro (if only Apple would follow this school of thought). So yes, the battery-operated camera does have the same AI engine built in to tell apart moving humans from moving cars, which is very useful in heavily trafficked areas since it can help keep the false alarms at a minimum rate. I’m not entirely sure whether it would help better preserve the battery, but we do get a bigger one, so it should be fine.

As for testing, I’m still not allowed to roam on busier streets and since my neighborhood has one car moving every half an hour, I needed to trick the camera with the same video that I used with the other Reolink cameras. And a strange thing happened, the camera was able to tell that it was looking at a screen (I am fairly sure it was able to see something different than my eye, due to the refresh rate), so I had to go back to the good non-virtual testing. 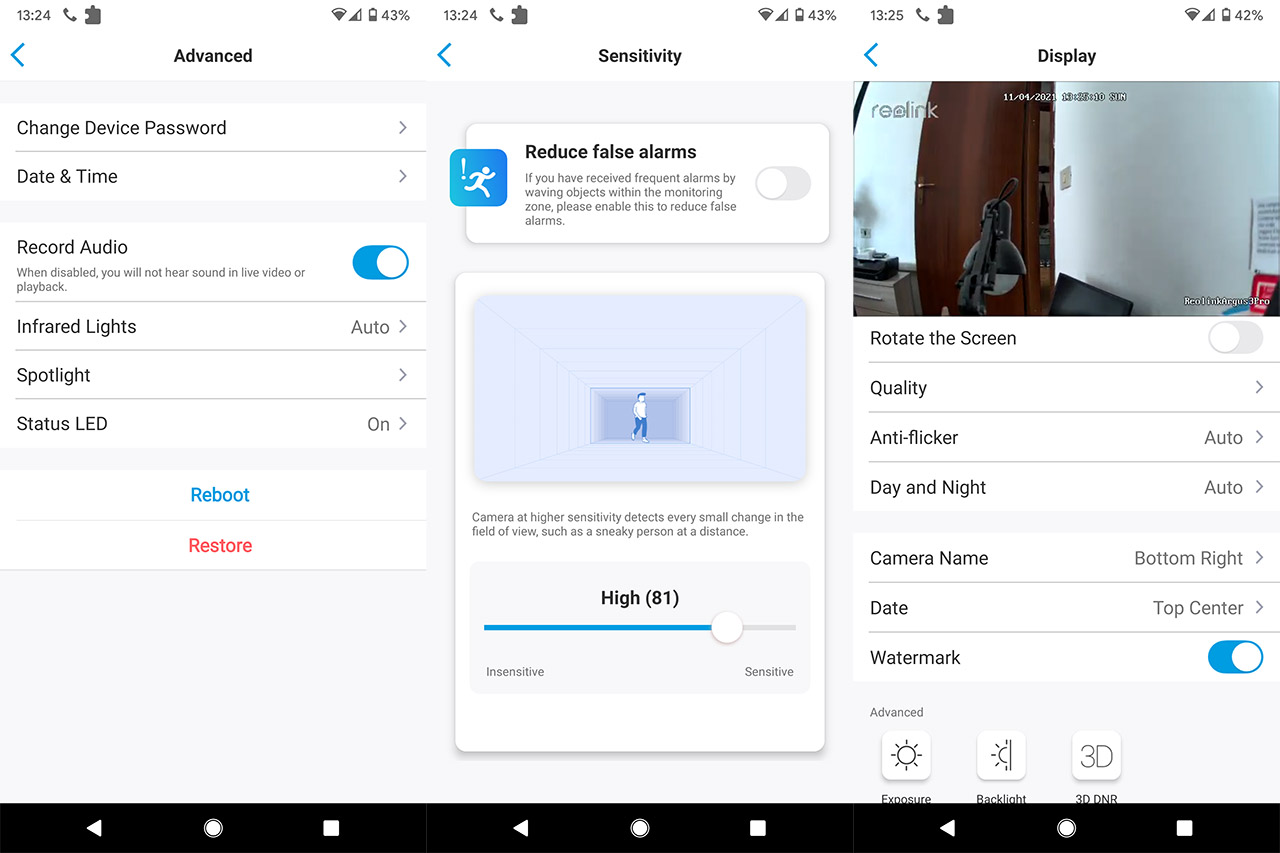 After dedicating an afternoon (when most people would walk their dogs), I was able to see how the Reolink Argus 3 Pro detects motion. It’s, of course, just as good as on the A series (as I call it), so expect accurate detection for up to 100 feet, where the camera can figure out when a car or a human is moving – even towards it. Furthermore, in the dark, things were just as good as during the day due to the built-in spotlight which gets enabled immediately after the front-facing motion sensor was triggered.

There can be false alarms if a piece of cloth moves in front of the camera or if it’s very windy and some tree branches get moved in a more ample way, but you can fix most of these occurrences by selecting an area of interest (Motion Area) in the app. There’s also the possibility to adjust the sensitivity and it should be higher if the area of interest is far and it should be lower if you need to monitor an area near the camera.

The Argus 3 battery-powered camera already had me impressed due to its fair features and competitive price but this time, Reolink really took out the entire artillery to blow out any similarly-priced competitor out of the water and yes, it also can be considered a proper competitor to the Arlo Pro 4. The price tag is currently (at the moment of writing) far below Netgear’s offering, so the Reolink Argus 3 Pro is clearly the best outdoor camera from the price to performance and features ratio. You get smart motion detection, a spotlight for deterring intruders and for colored night-time footage, there is a horn, two-way communication and even support for a solar panel, so I am honestly very curious to see what exactly will Reolink bring with the next Argus generation. 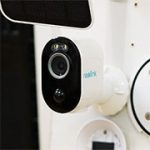