The user interface offers exactly the same options as the RLC-510A, so expect the bitrate on the left side (using the max image quality, it can go up to 8,192Kbps, but on average, I didn’t see it go above 6,400Kbps) and then there’s the live footage in the middle along with the usual series of quick action icons. First, there’s the Play/Pause button which is followed by the Audio icon (click on it if you want to enable the microphone, since, by default it’s on Mute) and then there’s the capture photo and the start recording icons. Further to the right, there’s the possibility to enlarge the footage to fullscreen and you can change the video quality. Out of the box, the image quality is set to Fluent which is the lowest available quality, but also the one that will require the least bandwidth and will have the least amount of lag. Next, there’s the Balanced option, followed by 5MP. Of course, using the max resolution is going to offer the best quality (obviously), but it will also eat up the most bandwidth (not that it’s going to be that much of a problem considering that it’s a wired connection – there is no support for WiFi) and I did notice some lag.

Just like the RLC-510A, there’s about 1 second a half of latency when someone gets in the frame. The resolution is set to 2560x1920p and as with the other Reolink cameras (including the outdoors RLC-511 and the indoors E1 Pro), it does rely on the SuperHD technology which ensures that the footage is clearer due to the use of more bandwidth (the compression is better).

Returning to the app, there are two icons at the bottom of the main page and one allows you to (digitally) zoom on a portion of the footage, while the other (PlayBack) will allow you to see any saved videos. You get the option to save your videos on your microSD card (that’s quite generous – up to 256GB) or you can rely on a Reolink NVR (it will work with Blue Iris). As I said in the introduction, the RLC-520A uses the same smart motion detection as the RLC-510A and, since it relies on the same hardware, it’s going to work in a similar manner. But, to make sure that it does, I essentially reproduced the same testing system: since I live in a very quite neighborhood, there are barely any cars and people around, so I had to use a YouTube video (credit to DNA of New York · Aviation · White Noise · Unwind) to trick the camera that it’s actually looking at a crowded street. 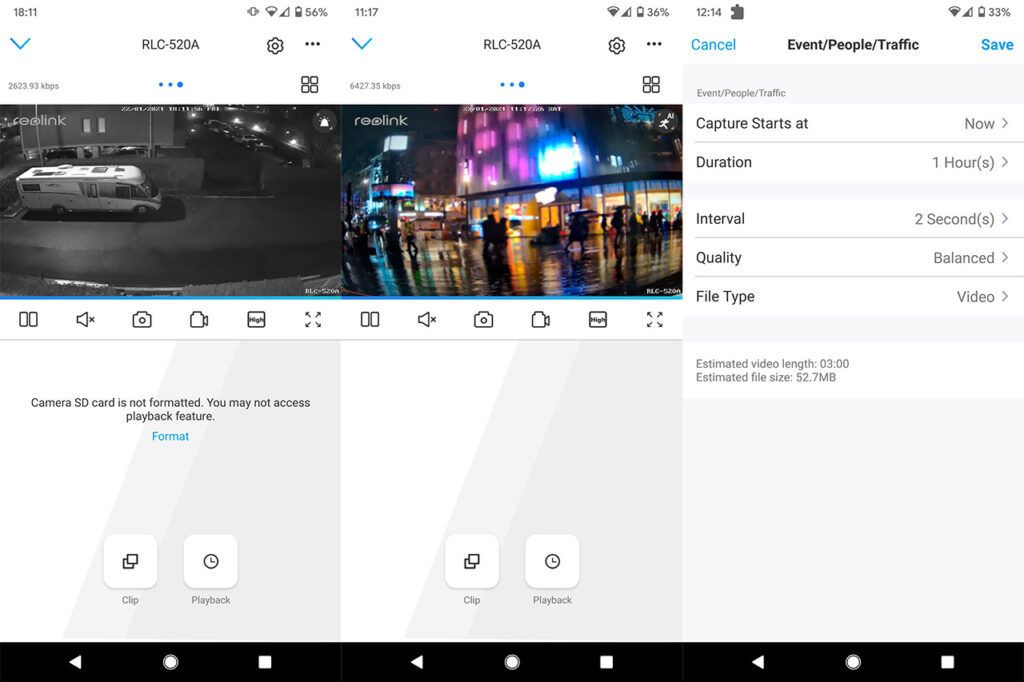 As expected, the performance was identical to the RLC-510A and if you want to read a more in-depth analysis, you can check it out here. That being said, the smart detection feature was able to accurately tell when a person was moving in front of camera and it would ignore any moving car and focus towards the person. But be aware that the detection is less accurate when the subject goes farther than 100 feet which is fine for this type of camera. I also noticed that it doesn’t need ample movements, only slight position changes would trigger the sensor and, even if the person moves towards the camera with its hands in the pocket, it would still be immediately detected. Of course, even if the RLC-520A has night vision that can go up to 100 feet, it will still need some reliable light sources to be able to see any moving cars or people, so make sure it’s not pitch black outside (in the area of interest). The notifications were also decently fast since both my phone and my smartwatch about 3 seconds after the event has occurred and you can set its behavior from the Settings section (tap on the gear wheel icon).

Here, you’ll also be able to change the Sensitivity of the motion detection (by default, it’s 41, but if the objects are far away, if you set it higher) and you can also set Motion Zones, where you can draw where the motion detection will be prioritized. This way, you get a lot less false detection. Lastly, I need to mention the Time Lapse feature which is also available on the RLC-510A and it’s an interesting way to create cool videos: you get to choose between various scenarios, each with its own time, file size estimation and the type of image quality (you can any of these default settings).

Even though the differences between the Reolink RLC-520A and the RLC-510A are only skin-deep, you do get a different form factor case that’s better protected against the harsh weather and I did notice that the manufacturer has also made the camera a bit more rugged than the RLC-520. Other than that, you still get the smart motion detection that works really well, the app is intuitive and I do appreciate the support for 256GB microSD cards. So, if you prefer the dome-shaped cameras and need the features of the RLC-520A, it’s difficult to find a more compelling package. 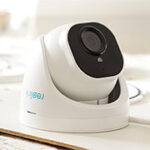