The Ubiquiti U6-Pro is part of the sixth generation of UniFi access points and that’s because it was released a bit later than the U6-LR and the U6-Lite, not that it may have a multi-Gigabit port or any other ‘exotic’ feature. It’s still the same gen as the U6-Enterprise which has a 2.5GbE port which can finally compete with the EAP660 HD and the ECW230S.

Ubiquiti seems to have had different ambitions with its U6-LR and the U6-Pro, and that’s to make the transition towards the WiFi 6 standard as cheap and painless as possible, so neither really aim to be speed champions. The problem is that while there is a clear distinction between the U6-Lite and the other WiFi 6 Ubiquiti APs, the lines get very blurred when putting the U6-LR and the Ubiquiti U6-Pro next to each other. Yes, I know the former should reach farther (LR stands for long range), while the latter is built to perform better on the 5GHz, but is that really the case?

There is a bump in the antenna gain of 0.5dBi for the 5GHz, while the transmit power is 22dBm as opposed to the 26dBm of the U6-LR, the platform is also different but is that enough to make a noticeable difference between the two models? There should be a difference, but I am not sure it’s going to be that steep, hence the small difference in terms of cost between the two models.

But, if there was one thing that the users were unhappy about the U6-LR was the lack of support for OFDMA on the 2.4GHz. It seems that Ubiquiti has added this feature on the U6-Pro, so, without further ado, let’s put the WiFi 6 access point to the test and see what it has to offer.

I suppose if we ignore the nanoHD, the Ubiquiti U6-Pro can be considered the WiFi 6 upgrade over the UAP-AC-Pro and that’s even more obvious if we put the two devices side by side. They’re pretty much identical not only from the design point of view, but they’re also the same size. Indeed, the Ubiquiti U6-Pro measures 7.76 x 1.38 inches or 19.7 x 3.5 cm (a tiny tiny bit larger than the UAP-AC-Pro) and, while the top section is plastic, the bottom is made of metal alloy.

I’ve seen this approach with lots of EnGenius access points, including the ECW230 and the latest WiFi 6E ECW336, and it works wonders for the heat management of compact access points. Ubiquiti still insists that their APs are suitable for outdoors, so there are no ventilation holes and you do get a silicone cover for the ports area, which means that the device will get hotter to the touch when it’s operational (due to the heat transfer), but there should be no risk of overheating.

The Ubiquiti U6-Pro is a ceiling-mount AP, so it’s not a good idea to keep it on a desk (it will move around), but you do get the option to use the unique mounting kit that the manufacturer added in the package. Even if it seems complicated, actually mounting the access point either on the wall or ceiling was surprisingly intuitive. At the top of the saucer-shaped case, there is the iconic LED ring which looks nice, but it’s as useful as any other single-LED system (not that much).

When everything is working properly, then the LED will be solid blue and, before it’s adopted to the UniFi controller, it will be solid white. What’s very problematic is that Ubiquiti has advertised that the users would be able to set the color that they wanted (RGB), but they have removed that feature. I have no idea why because as I said, the single LED pales in comparison to the traditional array of LEDs anyway. Why not have some fun?

In any case, on the bottom of the Ubiquiti U6-Pro, there is a dedicated area carved into the plastic where you can find the Reset button and a single Gigabit Ethernet port which supports PoE (802.3af).

I understand the push towards using PoE more since it’s so convenient, but I would have still wanted the option to power up the access point via a power cable. I have mentioned before that the Ubiquiti U6-Pro was built to withstand outdoor conditions and the device is indeed IP54-rated which I suppose could ensure that it withstands some degree of abuse from the elements. But I would still be careful to not put it completely in the open. Make sure that there is some sort of roof above it, otherwise it’s not going to last that long.

Opening up the U6-LR was a pain in the behind, but the Ubiquiti U6-Pro is even worse. The top plastic part is glued to the bottom section and even if I was using a heat gun, I still had to scratch and deform the case to finally be able to pop the top part off (this time, my fingers remained relatively intact).

I know that this is an excuse to keep the case waterproof, but then again, using a silicone seal and some screws would have worked just as well. Ubiquiti really needs to check out the right to repair movement and make opening up the case easier. After removing the top part, I could see that metal dome where Ubiquiti puts the antennas looks similar to what I saw on the U6-LR, but it’s slightly more different. And the antennas themselves are also properly labeled, so we know that there are two dedicated for the 2.4GHz radio, four for the 5GHz radio and one for the Bluetooth.

Next, I detached the metallic part of the case, leaving the antenna assembly still connected to the PCB. Flipping it upside down allowed me to identify the dual-core 1GHz Qualcomm IPQ5018, there are 4GB of flash NAND memory from Mouser Electronics (THGBMNG5D1LBAIL VD6963 2147KAE) and 8MB flash memory from MXIC (25U6432F).

I know other publications showed different specs which is why it’s important to actually open the device and check it yourself (perhaps we’re dealing with a hardware revision, but my point still stands). As for WiFi, the Ubiquiti U6-Pro uses the Qualcomm QCN9024 802.11a/b/g/n/ac/ax 4×4:4 + 4x SKY85748 ultra-liner highly integrated front-end modules for the 5GHz and I’ve seen this exact chip handling the 6GHz frequency band for the EnGenius ECW336.

As for the 2.4GHz radio, the U6-Pro uses the Qualcomm IPQ5018 802.11b/g/n/ax 2×2:2 chip. I noticed that the antenna connectors are glued to the PCB and that the heat transfer is essentially immediate towards the metallic bottom part with no aluminum covers or heatsinks in between. But where is the RAM? It’s on the other side of the PCB and we’re dealing with two 512MB Kingston D5128ECMDPGJD RAM chips which amount to 1GB.

The Ubiquiti U6-Pro has pretty much the same WiFi features as the U6-LR with the exception of OFDMA which is now supported on the 2.4GHz frequency band as well. And it shouldn’t be taken lightly because the OFDMA (Orthogonal Frequency Division Multiple Access) is pretty much the backbone of the 802.11ax standard, ensuring that there is less impact by the interference, as well as lowering the latency for sensitive applications.

It does work better with smaller packets, and you’ll see it make an impact only in very dense networks with lots of client devices and a larger number of access points where the co-channel interference is running wild. There is also the need for WiFi 6 client devices and make no mistake, we’re nowhere near mass adoption. We’ve barely adopted the features that were highlighted with the WiFi 5, such as BeamForming or MU-MIMO.

The curious thing is that the industry wants to push us now towards WiFi 6E. Slow down, guys, you’re not going to pull this off in the WiFi networking market, although I applaud your effort. I know people that are still using 802.11n (WiFi 4) routers, so the adoption at the home-user level is really not that great; neither is at the SMB or enterprise level because the equipment costs money, the monitoring and the management for new hardware costs money and it’s not worth it upgrading every couple of years.

Before getting to the actual results, I need to mention that a PoE adapter or switch is mandatory, and I used the Zyxel XS1930 which was way overkill for a Gigabit connection, but I had it already installed from when I tested the EnGenius ECW336 (not that Ubiquiti actually sends me anything, let alone an Ethernet switch). So, as I did with the U6-LR, I used three client devices, one with a WiFi 6 adapter and two with WiFi 5 cards.

And, since the Ubiquiti U6-Pro supports 160MHz channel width, I tried to keep the interference to the minimum to see the maximum performance that the AP can reach. At closer range (5 feet), the QCN9024 is absolutely phenomenal, delivering an average of 934Mbps upstream and 625Mbps downstream.

But again, keep in mind that I kept the interference to the minimum, which means that it’s most likely close to impossible to reproduce this behavior in a dense WiFi area. Moving a bit farther from the AP while also keeping the WiFi 6 client device connected to the 5GHz (160MHz) network, I could see that the attenuation gets a bit more aggressive, going from -27dB at 5 feet to -58dB at 15 feet and -70dB at 30 feet.

The throughput at 30 feet was 238Mbps up and 121Mbps downstream, but things get a bit problematic at 45 feet and farther. That because the attenuation shot up to 79dB and the throughput was barely decent, 43.9Mbps upstream and 12.7Mbps downstream. At 70 feet, I could no longer see the network, so it’s 0Mbps. Before reaching conclusions, I just assumed that it’s the fault of interference (which did ramp up after 30 feet) and it’s natural when using the 160MHz channel bandwidth on 5GHz.

So, I adjusted the settings to broadcast the signal at 80MHz and reconnected the WiFi 6 client device (AX200). As expected, the close-to-Gigabit speeds are gone, but the throughput is not bad. At 5 feet, upstream, I saw an average of 735Mbps, while downstream, it was 349Mbps.

The speed remains fairly consistent up until the 45 feet spot (-77dB), where the throughput goes down to 162Mbps up and 33.6Mbps downstream. Going farther to 70 feet disconnected the client device once again, so the problem is that the Ubiquiti U6-Pro just doesn’t reach that far, while most other WiFi 6 APs do. Was that done as to not overlap the potential audience for the U6-LR? Probably. 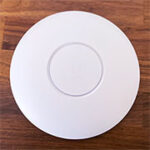