This is not the TP-Link AX20 to AX21 (where both devices are pretty much identical), no, the Asus RT-AX53U is actually built on a different platform, MediaTek. And don’t get me wrong, it’s an interesting platform considering that Ubiquiti used it as well for its U6-LR, so I think it would be interesting to see how the router performs compared to its Broadcom-based siblings. 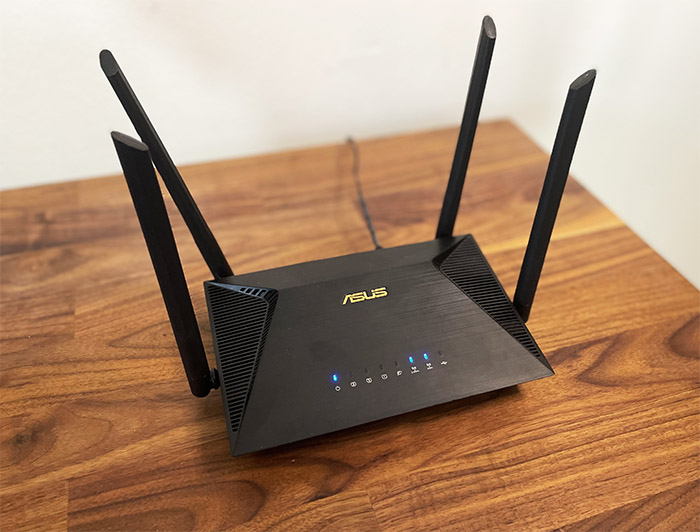 I do need to mention that the Asus RT-AX53U does support OFDMA (with no mention on whether it’s only on the 5GHz radio band), MU-MIMO (2×2, of course) and up to 80MHz channel bandwidth, which is fine for most house-based networks.

I did see that, just like the RT-AX55, the software features are suppressed up to a certain point since both routers use the AiProtection Classic which, unlike the AiProtection Pro that comes with the other better-equipped models, it’s more limited. I am not really complaining, especially when seeing the price of the router and the mess that Netgear is doing (as well as TP-Link, although a bit less).

The Asus RT-AX53U is perhaps the most compact AX1800 router that I tested so far, measuring only 7.5 x 5.0 x 1.7 inches (19.0 x 12.6 x 4.4 cm) which is less than the RT-AX55. And it does have four antennas, two on the rear and two on the sides; these antennas are not removable which is expected in this price range. But then again, very few people actually upgrade the antennas and even less see an actual benefit because there is a limit to how high you can go for consumer-based networking devices.

The case is rectangular and made of plastic covered by a black matte finish, and there are lots of ventilation holes at the top, bottom, sides and rear section which should ensure a good heat management. It’s true that despite being small, the internal components are not crammed together and there is enough space for a proper airflow. Obviously, I did use a thermal camera (AGM Glory Pro) to check the actual temperature and, as you can see, there are some heated points, but there is no overheating.

One of the main complaints that I had for the design of the RT-AX55 was that it couldn’t be mounted on a wall. This seems to have changed with the RT-AX53U because I could see two mounting holes on the bottom panel, right next to the four feet. But, be aware that only two have silicone covers, so, when adding lots of cables, the router can move around more freely than other heavier routers (which is not a good thing). Speaking of cables, let’s check the ports area.

You’re going to find all the ports and connectors on the rear side of the router and, from the left, there’s the Reset button, followed by Power button and the Power port. Then we get a USB 2.0 port which is there for printers since you’re not going to like the storage performance that it can deliver (are USB 3.0 that much expensive?). And next to it, there’s the WAN port (Gigabit) and three Gigabit LAN ports. What happened, where did the fourth LAN port go? It got annihilated by the budget cuts. Listen, WiFi is great and all, especially the WiFi 6, but you can’t yet beat a cabled connection, so I am definitely not a fan of removing LAN ports.

If you need more cabled connection, you will need to use a network switch and at that point, it’s better to just go with a more expensive router. Returning at the top of the Asus RT-AX53U, you do get the full suite of LEDs (I am surprised they didn’t put a single LED here..) and, from the left, there’s the Power LED followed by the three LEDs for the LAN ports.

Further to the right, there’s the WAN LED, two LEDs for the 2.4GHz and the 5GHz radio bands and the last LED shows the status of the USB port.

Since I needed to check out the internal hardware of the Asus RT-AX53U, I removed the two screws hidden underneath the two silicone covers (the other two feet are there for design purposes only). Do be careful because you are going to encounter a warranty seal which suggests that Asus doesn’t want you to open the case (doing so may void the warranty). That being said, I carefully detached the top cover – I had to do it more gently than with other routers because the plastic was less flexible – then I was able to see two interesting-looking heat sinks.

After detaching the heat sinks, I could identify a dual-core 880MHz Mediatek MT7621AT SoC which is not really the best performer on the market, but I assume it would do fine with a less dense network. Then, I could see 128MB of flash storage from Spansion (S34ML01G200TFI00) and 256MB of DDR3L RAM from ESMT (M15T2G16128A).

Note: The Asus RT-AX53U is an AX1800-class router, so it features a maximum theoretical data transfer rate of 1,201Mbps on the 5GHz radio band an a maximum of 574Mbps on the 2.4GHz band. Obviously, these are theoretical numbers which you’re not going to see in real-life conditions.

Considering that the Asus RT-AX53U is a WiFi 6 router, it does use a few of the new technologies which includes the OFDMA. It’s a feature that can make a difference in very dense networks since its role is to divide the channel bandwidth into smaller resource units (RUs) which then move data far more efficiently. To put in more in layman terms, while before, the data signals were transmitted one at a time per client device, with OFDMA, the transmission carries multiple RUs at the same time.

This means less interference, lower latency and far more efficiency, but only if the manufacturer has implemented it on both radio band, upstream and downstream. Asus has been quite adamant that they do implement this tech on both bands, but is it also the case with the entry-level models? There are no clear mentions on whether the Asus RT-AX53U uses OFDMA on both 5GHz and 2.4GHz, but in the GUI, you can enable it.

Also, the wireless performance was quite good on the 2.4GHz band but even so, I am very confident that you won’t see OFDMA on the 2.4GHz band for any inexpensive device for a very long time (the Asus RT-AX53U included). Then there’s the MU-MIMO which a lot of people argue that it doesn’t make any difference and I wrote a little bit about it as well, but the idea is that this technology makes much more sense on WiFi 6.

Also, the network needs to be very crowded and yes, you still need compatible client devices which can make use of it. Then again, the 2×2 config offered by the Asus RT-AX53U is nothing to brag about. Lastly, I need to mention the support for AiMesh which allows you to connect the RT-AX53U to a larger network of routers and form a mesh system. It’s pretty much the same concept as with the dedicated mesh systems, but you do get the possibility to use different types of Asus routers and even across different WiFi generations.

The testing process is the same as with the other wireless routers and access points: I use three client devices, one is a WiFi 6 computer (AX200), one is a WiFi 5 laptop (Intel 8265) and the last one is a Google Pixel 2 XL (also WiFi 5). The idea is to check the throughput at 5, 15, 30, 45 feet and as far as it goes until the signal strength not longer allows for a decent connection. But, since the distance is not really the best way to showcase how the router will behave in your own home or office, I also added the signal strength (-dB), so you can reproduce the same results on your own.

I also decided to add a graphic which shows how the throughput fluctuates over an hour and you may have noticed that there are a couple of dips. Those are caused intentionally because they occurred as soon as I opened a signal-tracking app, but I used this app with other devices as well and I never saw the speed go down like that. My conclusion is that the RT-AX53U will work really well with a few devices, even with one or two demanding clients, but it is not going to do that well with many concurrent demanding client devices.

So, just use the RT-AX53U with a smaller network since it’s clear that this is what it was built for. The next client device is equipped with an Intel 8265 adapter (WiFi 5) and the wireless performance differs a bit more near the router (557Mbps at 5 feet and 526Mbps at 15 feet), but it does get more similar to the WiFi 6 client device the farther I went. At about 75 feet, the attenuation was about -86dB and the throughput was 22.6Mbps upstream and 17.8Mbps downstream, so I would not go farther than that.

The Pixel 2 XL was a bit more interesting because near the router, at 5 feet, I measured an average of 654Mbps upstream, with a drop to 252Mbps downstream, so it’s very close to the AX200 client device. And you will get a decent performance as long as you don’t get farther than 45 feet because the signal dropped a lot (-87dB) before reaching 65 feet, so there’s no use going that far since the connection simply drops. 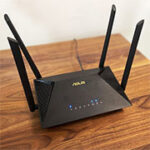